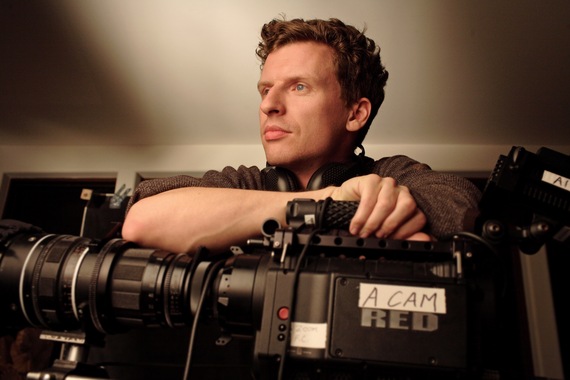 Yes... your secret is out. YOU are an agent of social change. You have an impossible mission that is calling you constantly.

I know how you feel. Ever since I was 12, I've been drawn to direct "moving movies" -- films that transform our perspectives and enrich our lives. After directing 'The Secret' back in 2006, I realized that no story is more dramatic and engaging than the one you and I are co-starring in right now; for if the story of humanity were a feature film, we'd be at the epic climax where our collective choices determine our destiny. Financial wars, terrorism, nuclear meltdowns, climate cataclysm -- the stakes have never been higher.

Alas, film alone isn't adequately equipped to deal with our personal and planetary challenges. It is afterall, a passive media form. Film can certainly inspire, but when it comes to taking action, you have to get up and leave the cinema. By contrast, the internet is a great medium for action, but typically doesn't evoke emotion quite like movies do.

So to meet the converging demands of our seemingly insurmountable storyline, what's evolving is a convergent media form where the viewer is the hero and real-life is the backdrop. I call it 'inspir-active' media because it fuses inspiration with action simultaneously to create an optimum state of effectiveness. Positive psychologists refer to this as 'the flow state,' others refer to it simply as 'the zone,' and we all experience it as an energized focus while in the process of the activity.

It's an uncommon experience, however, to be in the zone while watching the news, or contemplating global challenges -- those things typically knock us out of the zone. That's why inspir-action is such an important development and is the future of 'social' media (media that tackles social issues). Inspiration without action is just a pretty feeling, and action without inspiration is drudgery, but when the two states are fused together, there is a catalytic reaction that unleashes the power of the human spirit.

Along the way, in my own work, I've discovered some distinctions that are key to delivering inspir-active experiences. I'll share the top seven...

1. Problems are serious but the solutions don't have to be. Death, dysentery and deforestation are hardly laughing matters, but humor is the key to the success of their solutions including Dumb Ways to Die, Who Gives a Crap and my personal favorite, Follow the Frog.

3. Don't make your target audience the baddie. Demonize anything else but never the people you want to inspire. If you attack them, they'll snap into a defensive mode which will close their hearts and dash any hopes of inspiring them. Instead, appreciate and celebrate your target audience -- they're more charming than you realize. If you're incorrigible and simply must attack your audience, make sure you're only criticising their 'behaviour' and preferably do it with humor.

4. Target the people who really want what you're offering. This may sound obvious, but many social change agents target the people who don't want their solution which leads to defensive debates rather than progress. So target your supporters and trust that many others will be swept along in the slipstream. This will bring you great relief.

5. Strike while the iron is hot. Remember, to achieve inspir-action, you need to deliver the inspiration and action simultaneously. It's not enough to give people action to do later on -- they'll forget. A complete action needs to be delivered immediately. The internet has made this more possible than ever before.

6. Offer low-friction action. The idea here is to make action feel easy and 'low-friction' because it's inspired and they're in a state of flow. This is a sliding scale because the more inspired people are, the more action they're willing to take. So be honest with yourself about how inspired your audience really are, then deliver an irresistible action.

7. Take care of you first. Yes, oxygen masks on airplanes do this right. No-one benefits from you passing out, so take good care of yourself and take time out when you need to, then when you are brimming with aliveness, others will benefit from the over-flow.

Personally, I'm currently applying the principles of inspir-action to help address the defining issue of the 21st century. It astounded me to realize that we go to Facebook for friendships, iTunes for music, Google for search and nowhere for climate change. There are millions of sites and services, but what's really needed is a central platform that delivers the best the world has to offer, so we can offer our best to the world. Experience a sneak preview.

So social change agent, upgrading the world and having fun in the process is your mission, should you choose to accept it. I look forward to hearing about your experiences in the comments. This message will self-destruct when you close this browser tab.

Our annual, international Fellowship is open to anyone aged 28 -- 108 years old. We gather change-makers -- a business person, a community person, an investor, a thinker or doer -- who are willing to harness their talents, energy and resources as a force for good. Pioneers for Change is an initiative of Adessy Associates.

Adessy Associates believes that a better world is possible and inspires and equips organisations and individuals to make positive change happen for the benefit of people, planet and profit. Our bespoke interventions harness sustainability, innovation, consciousness and purpose.

About Drew Heriot:
Australian-born director, Drew, is best known for his inspirational films including 'The Secret' which, in 2006 and 2007 became the highest-selling DVD in the USA. Heriot's latest film, 'The Power of the Heart,' starring Paulo Coelho, Maya Angelo and Eckhart Tolle, presents scientific evidence that your heart is much more than a physical pump then leads you to uncover, and rediscover, the treasure in your chest.