South Sudan, home to the longest civil war on the African continent at a cost of more than 1.5 million lives, is a country ravaged by war and conflict. In 2005, a peace treaty backed by the United States finally ended the brutal war and guaranteed the South's right to secede from Sudan. However, the latest outbreak of violence, which began in late 2013, shows that little has changed. For the last two years, the world's newest country has been plagued by "rampant inflation, civil war and food shortages." Security and rule of law are virtually non-existent, and food and medicine are scarce. More than two million people have fled their homes in search of safety. 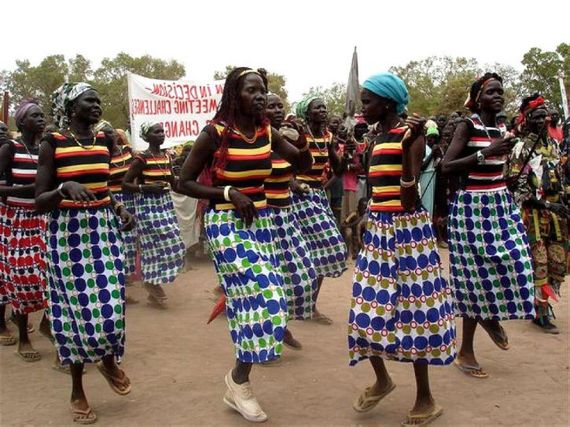 Across the globe, war and conflict disproportionately impact women, and South Sudan is not an exception. Rape, torture and other types of sexual and gender-based violence are daily occurrences. The legacy of protracted conflict, combined with traditional norms and cultural practices, place women and their families at heightened risk of marginalization and destitution. At the same time, women's participation in the economy can improve their standing in the home and community, with a ripple effect that extends well beyond those circles. As such, women's economic empowerment represents a missed opportunity for contributing to lasting peace and development in South Sudan.

When the nation formally gained its independence in July 2011, the South Sudanese people were ecstatic, celebrating on packed streets and town squares across the country. Despite this optimism, the opportunity for renewed conflict was ripe. Just two years later in 2013, the country was nearly bankrupt, in a standoff with Sudan over oil revenue, security, and other long-standing issues. Since then, South Sudan has been embroiled in its own civil war, with rival political factions vying for control of the government.

Importantly, women have made some significant political gains as a result of independence. The Transitional Constitution of South Sudan, ratified in 2011, formally recognizes women's rights and gender equality, including the principles of equal pay for equal work, the right to own property, and equal participation in public life. Within government, the constitution calls for quotas of at least 25 percent women's representation across legislative and executive bodies. As of 2014, women hold 27 percent of seats in the National Legislative Assembly. However, this commitment has not been reflected in the post-independence cabinet, where women hold only 5 out of 29 ministerial positions and are even less represented at sub-national levels. Similarly, the economic realities do not match the commitments outlined in the constitution. Only 12 percent of women are formally employed, and at all levels, earn lower wages than men.

In South Sudan, women represent the majority of those living below the poverty line and have limited access to economic opportunities that could better their lives. Women still comprise the largest source of unpaid domestic labor, and when women do work outside the home, they are more likely to be informally employed, and as a result are paid less and experience greater job insecurity.

According to South Sudan's Minister of Gender, Child, and Social Welfare, the devaluation of women and girls is one of the key contributing obstacles to the country's stability and forward development. Customary laws and discriminatory cultural practices such as land access, ownership, and inheritance rights, combined with household food production and domestic responsibilities, limit women's participation in both the formal and informal economy.

War exacerbates the many challenges South Sudanese women face. Conflict places added pressure on families to marry off their daughters at younger ages. Insecurity due to violence further restricts women's economic opportunities and their freedom of movement, making it difficult to leave the house without being vulnerable to rape and other forms of sexual violence. Warring factions strategically target women and girls for rape and assault as a means of destroying families and communities. Thus, as the violence mounts, women are made more vulnerable when they flee their homes, try to access essential life-saving services, and even when they seek refuge in camps. According to UNICEF Director Anthony Lake, "Girls as young as 8 have been gang raped and murdered."

As South Sudan looks to build a peaceful and developed state, it must invest in its women. Enhancing women's economic agency creates tangible benefits that reverberate outward to families and communities. Nearly fifty years ago, economist Ester Boserup was among the first to link economic independence to women's improved status in the family and community. When women earn, they gain both voice and choice, many for the first time in their lives. Winner of the 1998 Nobel Prize in Economic Science, Amartya Sen, touts the benefits of investing in women in his seminal work, Development as Freedom. According to Sen, income-producing women have healthier children with higher immunization rates and greater nutrition. Their daughters tend to stay in school longer, marry later, garner higher wages, and have fewer of their own children.

A Roadmap for Promoting Women's Economic Empowerment, a report conducted by the UN Foundation on proven and high-potential economic empowerment interventions, places primacy on the role of women. It finds, "Women in poor households, unlike men, are expected to invest any windfall cash into the family." A recent World Bank study across 20 developing countries concludes, "Women's ability to work for pay... may be one of the most visible and game-changing events in the life of modern households and communities.

In January 2016, the two warring political factions in South Sudan reached an agreement on the framework for a transitional government. As negotiations continue over the composition of that transitional government, tensions remain high. Many fear that the peace agreement made earlier in the month is unraveling and that violence will erupt once again. Of the twenty peace negotiation delegates, three are women. In the coming days and weeks, they and their male counterparts will likely continue to work towards a negotiated settlement. Should the agreement hold, the transitional government would ultimately give way to new elections in three years time.

Between now and then, the opportunity is ripe for South Sudan to capitalize on women's productive potential. The female peace negotiators must work with their male counterparts to secure spaces to advance women's agency. Women - over 65 percent of the population - must be included in the drafting and implementation of reconstruction and development policies and programs. In doing so, they can facilitate women and girls' access to the education and skills they need to participate in the economic and political life of the country.

The government must also be held accountable for its constitutional commitment to women's rights and gender equality. Implementation and enforcement will be critical and difficult, especially at the state and local levels. This is exactly where the government has failed in the past, and there are few, if any, enforcement mechanisms currently in place. Failure to do so, however, represents a missed opportunity for building sustainable growth and a viable peace. The very future of South Sudan is at stake.

Originally published as an occasional paper by Georgetown Institute for Women, Peace, and Security in their volume titled "Women's Economic Participation in Conflict-Affected and Fragile Settings."