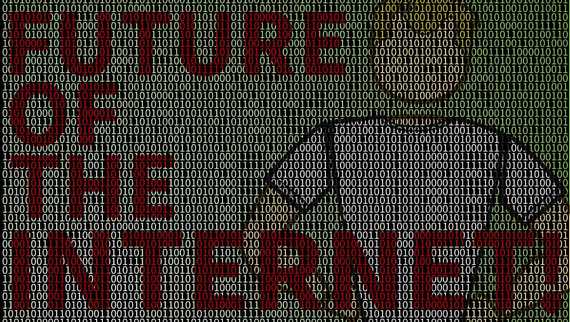 The Internet is a ubiquitous phenomenon that seemingly emerged out of nowhere. In my opinion, this emergence represents the most powerful example of exponential computational improvements. You don't need me to tell you that the effects of networked computers have been overwhelmingly pervasive, but I find that too few people realize that the Internet is still in its infancy, and it's still got a lot of evolving to do. So what is the future of this medium? How will it continue to shape our lives in the 2020s? 2030s? 2040s? Like the second The Advanced Apes video "Can We Live Forever?", I put my futurist hat on and tried to see what we can expect from the Internet in the near-term future:

So the major point of that video, as I stated towards the end, was to help people contextualize the Internet's development. It is inherently difficult for the human brain to understand the overwhelming implications of exponential growth. The Internet is a great example of this because very few people saw it coming in the first place, even though its emergence was predictable from an exponential point of view. Take a look at the following graphs from Ray Kurzweil's 2001 article "The Law of Accelerating Returns": 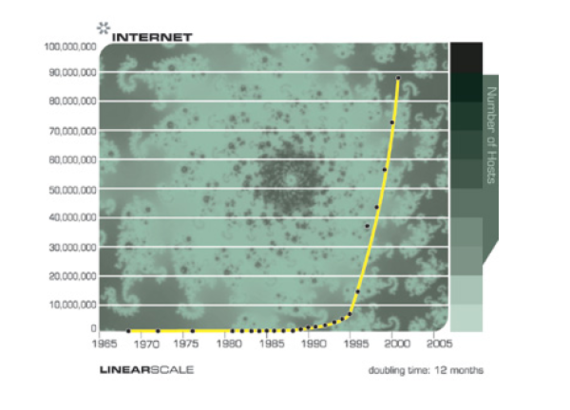 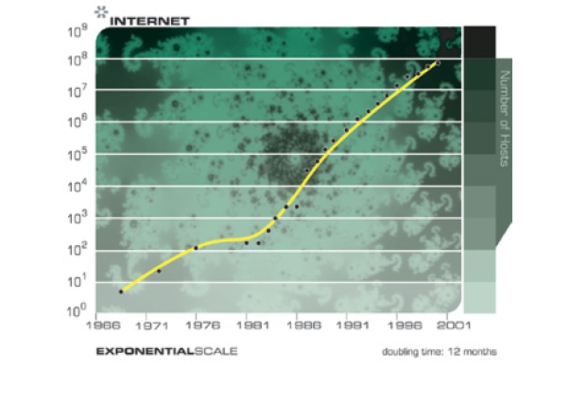 The point of this discussion is two-fold. First, the Internet should continue to accelerate in its growth at an exponential pace until all 7 (or 8) billion of us are connected. Second, exponential growth does not just apply to the Internet, but also to all the information and communication technologies (ICT) that we build the Internet with. As a result, it is quite easy to predict what type of medium we will be communicating within during the 2020s, 2030s, or even the 2040s.

Therefore, I don't think it's outlandish for me to state that the changes caused by networked computing will be the major theme of our lives.

There were so many aspects of these changes that I was not able to explore with great depth (i.e., like Vint Cerf's idea for an Interplanetary Internet or Helen Duce's idea for "The Internet of Things"), and there were also so many aspects of future Internet changes that I didn't have time to mention at all (i.e., how will brain-interface devices and nano-assemblers interact with and enhance our experience with the Internet?)! "The Future of the Internet" is a big question to explore in only 5-6 minutes, and possibilities presented by technologies like "full-immersion virtual reality" or phenomena like "ambient intelligence" really deserve their own videos.

Of course, because we are discussing the future, there will be disagreement (perhaps intense disagreement) about how much of an impact something like wearable computing or the semantic web will have. For example, some people think that wearable computing is too impractical and raises too many privacy concerns for it to really take off (although I would note that people thought tablets were impractical as well). Whereas some think that semantic web projects will ultimately fail to capture all of human knowledge in an explicit and logical format.

From an anthropological point of view I like to think about how these technologies are already changing what it means to be human. We have always been cyborgs, but ubiquitous access to the Internet makes this increasingly evident. We can now extend our minds and preserve them on other mediums. We are curating an online presence that is becoming ever more integrated with our "real world" presence. The ICT developments on the near-term horizon will likely blur the lines between these two versions of yourself (if they haven't already been completely blurred).

Furthermore, ICT creates "social worm holes" that allow us to transcend previously insurmountable space-time barriers bringing the world conversation closer together at a pace that mirrors the exponential development of ICT itself. In my opinion, this brings us remarkably close to a global civilization that has eradicated geography. Where you happen to be located on planet Earth, shouldn't matter too much in the 2030s or 2040s. Of course, eradicating geography is achievable to some degree today, as I could easily call or Skype to verbally communicate with someone in Belgium or China. But this process is relative, as I cannot easily physically interact with someone in Belgium or China because the virtual and "real worlds" have not completely blurred yet. A complete blurring will change every aspect of how we live our lives and interact with the rest of humanity. What does a planet covered in advanced easily accessible space-time wormholes look like?

But these are just some of my thoughts on the future of the Internet, and I'm interested to know what you think. Have I missed any of the potentially world shattering near-term future aspects of the Internet? How do you think your life will change as the Internet continues to grow and evolve? Let me know below or reach out on Twitter! (@cadelllast)

Oh! And if you liked the video, check out The Advanced Apes channel and subscribe!

Evolutionary anthropologist and creator of The Advanced Apes