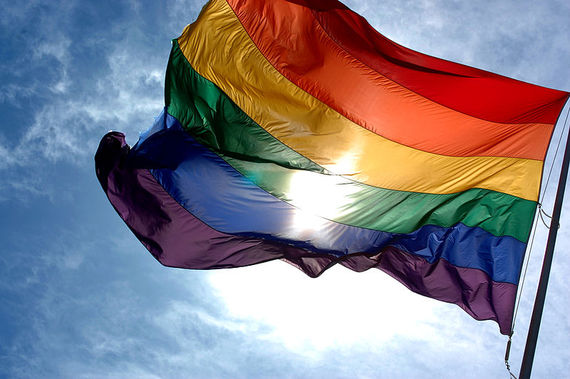 The other night my wife and I were reading to our 4-year-old daughter a children's book that we borrowed from the public library. We came to a section where two characters -- both who were the same sex -- began having romantic feelings for each other. My wife and I smiled -- we have many good LGBT friends.

Later that evening after putting my daughter to bed, I began wondering about the future of the LGBT movement, especially after Tim Cook, Apple's CEO and probably the world's most influential technologist, recently said he was proud to be gay. It's certainly interesting to speculate on how sexuality, sexual orientation, and society's interpretation of it all will change over the next 25 years as we charge headlong into the transhumanist age.

It shouldn't come as a surprise to anyone that the LGBT movement and transhumanism have a lot in common. Nearly all transhumanists support the LGBT cause. After all, a desire to be free to alter, express, and control one's sexual preference and identity sounds like a transhumanist concept. Advocates of transhumanism aim to alter, express, and control their bodies and preferences too, except they emphasize doing it with science and technology. If you look closely, the two movements -- especially some of their major philosophies -- are practically different sides of the same coin, and each is poised to gain strength from one another in the future as radical technologies transform the species.

In the next 25 years, the human being will undergo a larger transformation of its evolutionary body than it has undergone in the last 100,000 years. Artificial hearts will likely become better than real hearts. Telepathy via brain implants will become an important form of communication. Men will be able to give birth with implanted uteri. Each of these technologies already exists in some form and will soon be more widely available.

The million dollar question regarding these technologies is whether we will be allowed to freely use them. After all, the United States Congress is basically made up of all religious politicians, some whose faiths derive from texts that forbid anything like LGBT practices or transhumanism. Transhumanist's main goals are to overcome mortality and become as free and powerful as possible using technology--in essence, to become godlike.

For ages now, society has largely been afraid of transformation, especially when it concerns the human body or sexuality. Even today, a dozen U.S. states still have anti-sodomy laws, and LGBT people are often killed in places around the world -- sometimes stoned to death -- for their actions and beliefs. While victories have been won in the 21st century, such as in California and other states where people of the same sex can now officially marry, massive inequalities and bigotry still exist.

In the future, transhumanist technology and science will compliment the LGBT movement and help push it forward in the face of continued social oppression and closed-mindedness. This is important, since LGBT people are devoted to freedom. They want to be free to do anything they please without condemnation so long as it doesn't hurt others. Transhumanists -- a notable number who are LGBT themselves -- want the same exact thing. And they can work together to better achieve their goals. 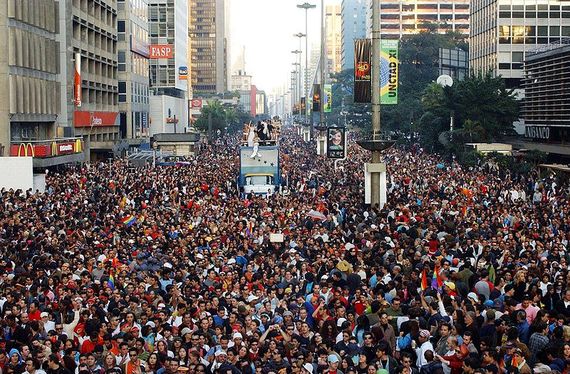 Millions of people during an LGBT Pride Parade. Photo by Agência Brasil

With the onslaught of new tech and advanced medical and surgical techniques hitting the market, it's likely the LGBT movement will involve more transhumanist issues in the future. For those who are conservative and resist change, this may prove challenging. Take cybersex and virtual reality, for example, where Facebook's Oculus Rift and haptic suits will allow people from all corners of the world to have group sex if they want. Or what about fembots and sexbots, which already represent a growing 100 million dollar market? In 10 years, some robots may be as sophisticated as humans. Do we give them rights? Can we marry them? What if they're gay? What if we program them to not know if they're gay or not?

"The world is shifting under our feet," says B.J. Murphy, a pansexual transhumanist, writer, and futurist. "In 15 years, conservatives and anti-gay people will look back at the LGBT movement and yearn for an adversary so simple in its demands."

B.J. Murphy is right. The future will be anything but simple. Already, within two decade's time, parents may choose to have designer babies without certain sexual organs. Is a uterus necessary if you have ectogenesis (use of artificial wombs)? Or does it just present extra cancer risk and, for some, decades of painful, crampy menstrual cycles? Alternatively, will some religions encourage some males to be born with genetically lowered sex drives so they may have a better chance at becoming celibate priests, a shrinking vocation in the U.S.? Finally, will some seemingly narcissistic people procreate only through cloning techniques? The bizarre questions of the transhumanist age seem endless -- and they are already being asked by a growing number of people.

Frankly, I could see many humans in the future stopping physical sex altogether as cranial implant technology finds precisely the right means to stimulate erogenous zones in the brain -- something researchers are already working on. Real sex will probably not be able to match direct and scientifically targeted stimulation of our minds. Such actions may lead to a society where male and female traits disappear as pleasure becomes "on-demand," and gene therapy is able to combine the most functional parts of both genders into one entity. Not surprisingly, some institutions like marriage may end up going the way of the dinosaurs.

The LGBT movement has found firm footing in the 21st century -- a testament to the courage of its supporters. I applaud them and support their courageous efforts. As a transhumanist, atheist, and a politician, I stand ready to defend their freedoms and push their agenda forward, all the while knowing that the future will bring its own set of new challenges that none of us can easily foresee. In fact, the clash of civil rights in the transhumanist era may just be starting in a whole new way. Personhood, sexual freedom (virtual or not), and gender identity (or non-identity) will soon take on unprecedented roles in society, spurred by radical innovation and changing stereotypes of what it means to be a human being. For me, the wildcard of the future is not in society, but in the transformative technology that we invent and embrace.