America is at a digital crossroads. That was the clear message of the Chairman of the FCC Julius Genachowski this week.

And the venue could not have been any more appropriate.

As the 120,000 or so attendees struggled to check email, send SMS messages, and use the web to navigate the world's largest trade show, Genachowski couldn't help but point out that the problem threatens far more than conventioneers. 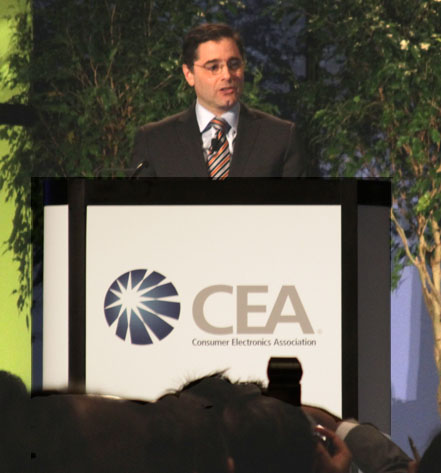 "Without spectrum, American leadership is threatened" said the Chairman. It's far more than "consumers frustrated with slow speeds and dropped connections. If we do not have a world-class infrastructure here in broadband for cutting-edge devices and services, the next generation of innovations, the next great companies... will start in another country and not here."

Genachowski reminded audiences of a time when, as a child, he traveled outside the US. Back then, our phone system was the envy of the world -- and worldwide, getting a dial tone was often not easy. But now, "we are in a global race where he have a head start and huge advantages. But nothing is guaranteed in the 21st century."

Spectrum is "invisible infrastructure," the Chairman reminds us. And we ignore it at our peril.

Citing the innovator's dilemma, Genachowski said he understood the challenge of asking industry to shift from profitable legacy models to new platforms where their dominance isn't assured.

And just so that it was clear that there was more at stake than being able to place a cell phone call or check your email wirelessly, the Chairman shared the story of Applied Materials. Applied Materials describes itself as the global leader in providing innovative equipment, services and software to enable the manufacture of advanced semiconductor, flat panel display and solar photovoltaic products.

And so when the FCC Chairman tells a room of communications executives that Applied Materials moved its Chief Technology Officer and advanced solar R&D operations from Silicon Valley to Beijing, the question it poses is: "How many times does that have to happen before we declare a crisis?"

Genachowski was at CES to promote a "national broadband plan," designed to free up spectrum for mobile wireless. A plan that industry groups like CES support. "As people go to smartphones and tablets, the devices put demands on the spectrum that's not just a little bit more than the previous improvements in phones, that's 30x, 40x, 50 times more."

The result would be a 'digital dividend' that would pay back industry, users, and the economy at large. Said the Chairman "our common infrastructure is a horizontal thing that so much of our economy rests on. It's clear now that... our success relies on a robust international digital infrastructure, both wired and wireless."

The idea of the plan, simply put, would be to free up 500 megahertz of spectrum now controlled privately, largely by TV broadcasters. The sale of this spectrum would be via voluntary incentive auctions, in which a broadcasters with a piece of unused spectrum would be offered a substantial incentive to put it out to bid. "This will assure that spectrum is put to the most valued uses, unlocking substantial value now untapped because of outdated policies," said Genachowsky.

Genachowski talked a good deal about bipartisan support, and said the National Broadband Plan is "a test of whether the United States can make the right choices in a fast-moving, competitive global economy."

He said bills had been introduced in the past Congress to carry out the plan had bi-partisan support. With this new Congress, that remains to be seen.