Right now everyone is hoping Jack Dorsey's "innovator intuition" will revitalize Twitter just because Steve Jobs did it at Apple. But set aside hope and let's look at some cold, hard facts to see if Twitter can survive. 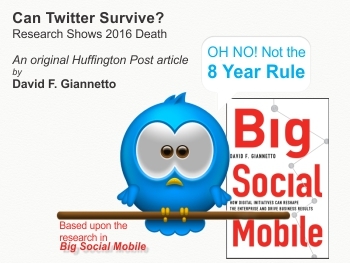 While researching my new book, Big Social Mobile (Palgrave Macmillan), I sat down with the team at ICANN WHOIS, the organization that tracks and manages domain activity on the internet, to determine the "survivability" of organizations operating in the digital domain. I reviewed the activity of every domain on the internet--purchase, inactivity, transfer and abandonment of all domains--from 2002 until 2013.

What the data foretells is a grim tragedy about unfold.

From the first .com the Internet has grown to over 275 million active domains conducting legal commerce or sharing information through a fixed web address. But this number is misleading. The digital world operates the same as any land-based community. People come and go; companies succeed and fail. Across the entire digital landscape 15 percent of Internet locations are empty lots owned by someone but sitting idle and empty. Another 21 percent are the equivalent of under construction or coming soon, or are so simple they offer little benefit to consumers. Only 64 percent of the Internet locations, or domains, consist of multi-page sites that will actually help make consumers' lives better, or at least more interesting.

This means that approximately 180 million of the 275 million domains are active in the true sense of the word. And just like in the real world, some of these are in the process of going out of business--in the physical world 50 percent of small businesses fail within their first five years and 10% of mature organizations fail each year.

According to WhoIs data, over 193,000 Internet domains are abandoned each day--approximately 70 million per year. A larger number of domains change hands, approximately 113,000 per day or 41 million per year. It is this behavior that makes the current number of 180 million entities or individuals operating via the Internet misleading--it seems like a lot. But to gain a real perspective you must compare this number to the 131 million new domains born each year, and the 41 million changing hands.

But this still doesn't tell the entire story. All of these numbers actually need to be calculated cumulatively back to the very beginning of the Internet itself. In approximately three decades, the Internet has accumulated only 180 million or so entities actively using it to conduct business or share information. This same number fails every 8.75 years, at the 2013 rate. Again, in the physical world 50 percent of new companies fail within five years and 10 percent of large organizations each year. In the digital world the equivalent of every organization doing business anywhere in the world dies every 8.5 years.

This is what I call the Eight Year Rule, and it has profound impacts on digital initiatives. (For a complete description of the Eight Year Rule see: Giannetto, David F. (2014), Big Social Mobile, New York, NY: Palgrave Macmillan. Page 52 or www.BigSocialMobile.com)

The Death Knell of Digital Giants

Put this into a more easily understood context: you leave New York City for eight years and when you return not one business in the entire city remains. Every coffee shop, bar, deli, restaurant, department store and dry cleaner you ever did business with is gone. And this has happening over and over for over three decades. The digital world is a scary place to operate--succeeding for any significant length of time is nearly impossible.

You might think that given the high yearly failure rate amongst digital start-ups and the mathematical impact of sites that will never go out of existence, such as government websites, online mega-brands such as Twitter would be immune to the Eight Year Rule. After all, only 10% of mature companies fail every year in the physical world.

Consider these mega-brands of the past:

Twitter was born in 2006, but didn't take off until South-by Southwest in 2007, and user counts started really growing in 2008. In 2013, new CEO Costolo took Twitter public with a stock offering of $26 per share. Share value quickly doubled and in one day a new public company is born valued at $31 billion.

2016: the eighth year of real existence for Twitter. The stock hits an all-time low under $14. With over 6 months of stagnant performance the biggest question is now: can Twitter survive?

This digital eight year death sentence is the by-produce of operating in an environment that is fundamentally hostile. It is the same as astronauts living in space or deep sea divers working underwater. Only the strongest, smartest and most adaptable will survive, and only then if they live according to the rules imposed upon them--rules that can never be outsmarted or outmaneuvered.

In the digital domain this rule is simple. Any entity can only grow in three ways: increase its community, offer more content diversity and/or enable greater commerce. Once these three areas have been fully saturated the platform can no longer survive. New functionality or features will not enable survival--only discovering a new way to grow at least one of these three areas will do it.

Yahoo remained wielded to the idea of personalized portals instead of offering the greater content that spider-based search engines could recommend. AOL took a similar approach; it failed to offer its community access to the broader information of the World Wide Web by restricting it to a relatively fixed AOL environment. MySpace too failed to increase the diversity of its content--text, icons, pictures, videos--in its quest for profitability. All three of these platforms had saturated their initial target audience, and all three failed to enable greater commerce through their websites. All three could no longer grow their community, content or commerce.

Google on the other hand, is ever increasing the ease by which its users can access increasingly diverse content, and making it easier to conduct commerce via its platform. Facebook is doing the same thing. Amazon, a platform built to enable commerce, remains focused on offering access to greater content (first books, then goods, now consumables). Why is Amazon fighting Apple for music and Netflix for movies--uphill battles against two deeply entrenched adversaries? It doesn't have a choice. They must continue to grow by gaining a greater community by offering a new type of content that enables commerce--or die.

These three digital giants continue to survive, relatively unchanged from their initial inception, because they are relentlessly focused on giving consumers what they want by increasing their community, content and commerce.

In late 2014, Twitter discovered how many people were willing to communicate using 140 characters--that community is fully saturated. By its very nature it cannot increase the diversity of its content--long videos, movies, even songs, all go against the nature of a platform that's value is delivering small snippets of information. This doesn't mean it can't offer more content--it could improve how it delivers bite-size, late-breaking news for example. But this would only delay the inevitable.

Despite attempts, Twitter has failed to become a meaningful eCommerce platform.
In its eighth year, the future for Twitter looks grim from every angle. But there is a strategy that would work.

To succeed in today's social economy, every organization must commit to meeting the changing demands of today's highly social, highly mobile, information-driven consumer or they will not remain viable for long. And one of these demands is easy and quick communications when they have a problem with a company's product or service. Consumers do not want to write long emails or make long phone calls. "I have a problem" requires only 16 characters.

Studies show that social consumers view Twitter as a viable customer service platform. The 2016 Social Support Survey by TSIA shows that people 26-36 prefer to use Twitter for customer service support more than any other platform, and equally as much as an online chat session. (4) 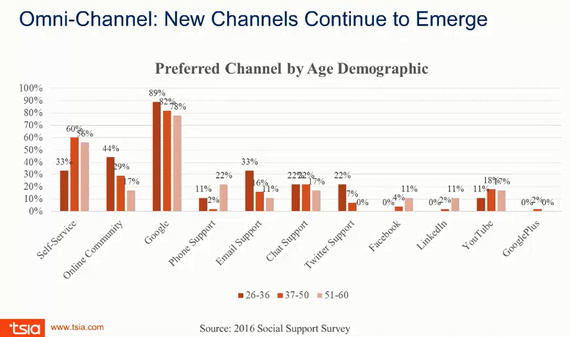 Can Twitter evolve to become the consumer-preferred customer service platform of tomorrow? The platform is capable. Little would be required to repurpose it as effective B2C communication technology. As a result it could significantly expand its potential community. And, it would position Twitter as a viable commerce platform for every company then using it for customer service. It could usher in a new wave of drastically improved customer experiences.

But remember, companies succumb to the Eight Year Rule because of their executive's inability to change, to see their invention through a new lens. And even when they do, they must get their entire organization behind this change, often changing people, process and technology. It is a daunting task. But this is the task in front of Jack Dorsey if he is to avoid the Eight Year Rule.

Learn more about the Eight Year Rule and how to survive in the digital domain at: www.BigSocialMobile.com.