Here is the one thing I can tell you that I know about marriage for certain: It is rarely, if ever, truly fair.

This is something I have known from being married 15 years now, albeit those are a combination of years from two different marriages. And when I read this article from a psychologist who studied 1,000 successful marriages between couples who had endured and flourished through many, many decades of matrimony, I became even more convinced that the concept of "equality" in a marriage just isn't real.

1. You can't be married and always put yourself first.
Articles in Time, CNN and even Forbes Magazine over the last few years discuss the trend in the Millennial generation to delay marriage or reject it entirely for relationships that are less binding and more exploratory. The concept of The Beta Marriage seems tongue in cheek, and yet it is rooted in the attitudes of a generation that has been taught to think for themselves, to please themselves, to seek out what makes them satisfied. These are not bad things; they are the things I want for my own children. But they ARE attitudes that, unless tempered, are difficult to maintain in the bond of marriage. She wants to go bass fishing. You want to go antiquing. One of you is going to have to give up where you want to go, or you each go alone. And alone, in a marriage, can be very, very lonely.

And how can you say "It's all about me" and be willing to bite your tongue when your grown wife sings NKOTB songs in the shower? Every. Single. Morning. And alternates, with a bizarre randomness, between the melody and the harmony with each verse? You can't. You didn't know one freaking song those no-talent ass clowns even sang before you married that woman and now you walk down the hallway in your office and now you're all like, "Listen up everybody if you wanna take a chance. Just get on the floor to the New Kids dance."

That's not about pleasing yourself. No.

2. You can't keep a scorecard.
At any moment, in any given day, one of you is going to need more. He has to work late. I have a story to finish. The children are crying. They shout out requests in the kitchen like hostage negotiators: I want the blue sippy cup with the green lid or I'm taking this sharpie to the couch, you got that lady? Can you really stand there and take a moment to tally up the points? I warmed up the corn dogs last night, it's his turn to take the scissors away from the toddler? No. You both jump in, you do what you can. Or he does it, even if he did it last time, because you feel like dealing with sharp objects isn't safe for you after being home with the terrorists all day.

Sometimes you will be the one who gets up every single night for a week when your baby is teething, because he has a big interview. And often, he will have to watch Dancing With The Stars and try not to notice when you cross and uncross your legs when Joey McIntyre sashays across the floor. And neither of you will do yourself (or the other) very much good if you have every "favor" or effort logged as ammunition against another sacrifice. It breeds resentment, it makes every effort false. You don't give her your hand as she steps out of the bathtub, only to remind her of that hand later. You offer your hand because you are alive and meant to love her and it is your vow to care for her. Even if she forgot your dry cleaning. And she covers you up in the night when you have kicked off the blankets, because she wants you to be warm. You forgot to do the dinner dishes, but she still wants you to be warm. It doesn't add up, right?

But these things, these intangible gifts we give each other, are not products of being equal.
They are products of we do our best when we are asked to do our best. Or try to.

You have to police yourself, you have to know when it's time to put her first or to ask him for help. But you can't go tit for tat. In a marriage that is meant to last a lifetime, there's no time for that.

3. It's okay not to like it.
I don't think it comes easily. I don't think we are born to suppress that mentality, that "it's my turn" voice that makes me keep lists of my sacrifices in my head and makes him forget to feed the cat. It's a struggle and a balancing act of daily proportions -- I don't know if I will ever get it right. And I don't think it is possible to be happy about the things we give up -- the time, the sleep, the things we think we need -- to make our partner happy. But will we be happier if we don't give them up? Truly, really, happier?

I once thought, rather idealistically, that the best equation for marital success was for both partners to strive for 100% each, to aim for 200% and end up as close as possible. That 50/50 was asking for "too little" of ourselves, that each partner could have what they needed in the package of a strong marriage, nearly all of the time.

But after a divorce and a second chance at this whole concept of "for better or for worse," I am recalibrating. I am adding and subtracting as the days require. I work a fuzzy math in my head, attempt to make it work for us.

So, it's alright if sometimes I give 10% and he only gives 90%, if the next day it switches the other way. It's okay if I give 70% for three months while he finishes that project or he gives 58.8% while I write my book. If I smile when he makes the same toast a million times and he unwilling learns all the words to "Hangin' Tough."

In fact, I am learning that the less I worry about the way we divide up the heavy lifting of being married, the more I feel like it seems pretty fair. And it feels like we can give and sacrifice with less effort and to take with less guilt.

At the end of our days, it probably won't be exactly even. But I'm not sure that a "happy" (or at least not UN-happy) couple ever really ends up making 50/50 add up to an even 100. It's a hard equation to prove, don't you think? And a dangerous result to try to strive toward.

And so, I try to just be nice him and he tries to be nice to me. And love with the breadth of what we interpret and re-interpret love to be. And we becomes martyrs and do selfish things and hurl insults when we are wounded or tired. And I drive him crazy and he forgets to turn the dishwasher on.

But I still cover him up when he is sleeping and looks cold, there -- drooling on my pillow or snoring too loudly.

These are the things that have the most value, what we give when we know that nothing might be given immediately in return.

But I feel best about the odds of happiness in my marriage when I do them.

Besides, I never was very good at math.

Marriage is hard, but may the odds be forever in our favor. 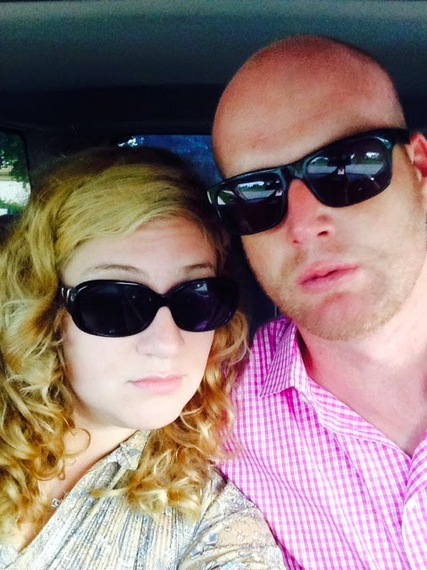