By Hong Soon-do, Beijing correspondent, AsiaToday - The G20 summit, which will focus on economic cooperation among member countries, will be held in Hangzhou, Zhejiang province, from September 4 to 5. Chinese President Xi Jinping will host U.S. President Barack Obama, Korean President Park Geun-hye, Russian President Vladimir Putin, and other leaders of the member countries for the summit. 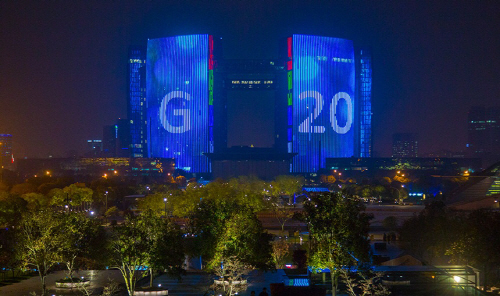 [View of Hangzhou, where the G20 summit will be held on Sept. 4-5./ Source: Xinhua News Agency]

The theme of the 11th G20 summit will be "Toward an Innovative, Invigorated, Interconnected and Inclusive World Economy," said China's Foreign Ministry spokesperson Lu Kang on Monday. Leaders from some G20 countries, guest countries and international organizations will attend the forum, Lu added.

Li Baodong, China's Vice Foreign Minister, said, "The upcoming G20 will discuss the member countries' economic structural reform, international financial organization reform, and cooperation in the energy and anti-corruption fields." However, since the current international situation looks unpromising, the participants seem to have no choice but to discuss other issues as well.

For example, the South China Sea issue is likely to be discussed. If this is the case, there could be quite a heated discussion between Chinese President Xi and U.S. President Obama. Considering the current atmosphere, it seems hard for the two countries to find out a meeting point.

The deployment issue of the Terminal High Altitude Area Defense (THAAD) in South Korea is also considered to provoke heated discussion among the countries directly involved. This is why there would be some under-the-table summits, however the schedule is not yet confirmed.

The upcoming summit is expected to further strengthen China-Russia alliance as China's high-ranking officials openly claim that Vladimir Putin will be the main guest at the next G20 summit. Prof. Jia Jin Jing of Renmin University of China said, "If discussion content stray from the original topic, the meeting would become less meaningful. But the current situation is likely to be."