The sun has finally appeared, and the TV trucks are rolling out of this ancient hot springs town on the outskirts of Sendai, Japan. This was the location over the weekend of the G7 meeting of finance ministers and central bankers which, although civil, has ended with a lack of consensus.

Sendai was the epicenter of one of the deadliest natural disasters in history, the Tohoku earthquake of March 11, 2011. Over 15,000 were lost, and some still remain homeless through the lengthy reconstruction period. Having lived in Sendai as an exchange student, this has been a sobering personal visit. The warmth of the city of Sendai's welcome has contrasted with the coolness of the G7 conclave itself.

The Sendai meeting is part of the run up to the G7 leaders summit next week at Ise-Shima, the region housing the holiest of shrines in the Japanese pantheon. President Obama is also scheduled to visit Hiroshima, where human intervention resulted in the loss of an estimated 80,000 people in 1945. The healing symbolism of the first presidential visit to the site of the first nuclear bombing of a civilian population has overshadowed the underlying differences between Japan and the United States.

These remain firmly grounded in diverging economic realities. Our interest rates are moving upwards, and Japan's are moving into negative territory. As this happens, currency adjustments are inevitable, and with these adjustments trade friction and the probable demise of the Trans Pacific Partnership, or TPP agreement. The US Treasury has already placed Japan on its currency watch list. 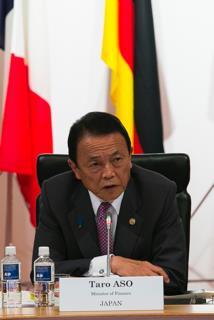 But there was a ray of light through the rain yesterday afternoon. The Japanese finance ministry, led by Taro Aso, announced an innovative type of disaster insurance, the Pandemic Emergency Funding Facility or PEF, and has seeded the program with $50 million. The innovation is that these monies are not intended for use as an emergency fund, but to purchase private company insurance premiums, creating an umbrella of coverage that is far greater, estimated to be $500 million.

At the host press conference, I asked Mr Aso for more information about how this would work, and he said the inspiration came from Jim Yong Kim, head of the World Bank and himself a medical doctor who is on a mission to prevent global pandemics. Mr Aso invoked divine intervention underlying the constellation of factors leading to the formation of PEF. It is obviously something he feels quite passionate about.

So far, Japan is the only country to make an announcement supporting this public-private financing initiative, but other G7 members can be expected to step up as the details are worked out. In the city of Sendai, struggling to recover after the earthquake and tsunami of five years ago, the idea of sharing the burden of the unexpected seems especially fitting. It is also very appropriate that Japan, which has learned to live with natural disasters over the centuries, is the progenitor of this (dare I say ground-breaking?) initiative.

When people ask what the central bankers and finance ministers actually accomplish at these high-level summits, and why the average person should care, PEF is as good an answer as any I have seen. During the Ebola outbreak, the lack of financing mechanisms caused serious delays. The next pandemic could occur at any time, and it is good to know that Japan is working on an issue that could effect every person on earth. Other nations should follow quickly.

After visiting the areas hard hit by the Tohoku earthquake yesterday, and seeing the burden that has been placed on its inhabitants, I wonder if PEF could be expanded even further, beyond pandemics, to cover natural disasters. Sharing the burden of events beyond our control but which have global consequences should be an essential pillar of an enlightened global financial system.