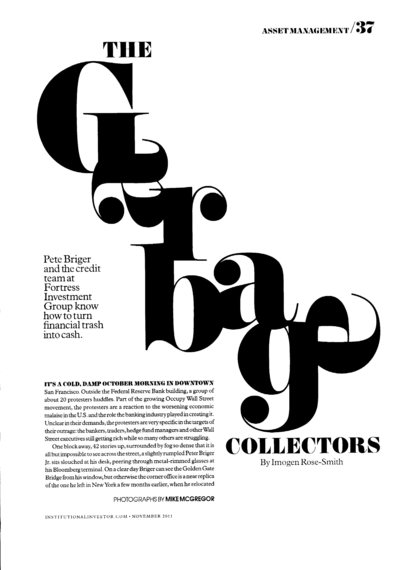 This intriguing title from a November, 2011, Institutional Investor profile wasn't discussing the legions of men and women who perform the socially useful task of keeping communities neat and hygienic -- au contraire -- the reference was to financial gamblers, those hedge and private equity folk who sweep up what they consider financial garbage: Non-Performing Loans ("NPL's"), mortgages where homeowners have fallen into deep default and/or homes which have already been seized by the banks ("REO's") which may or may not still house warm bodies. These financial garbage collectors have made a mint off of homeowner misery and continue their scorched earth policy with a vengeance. The article focused on Fortress Investment's Peter Briger, a/k/a "king of debt" a/k/a "junkyard dog," a man who scored big by buying up the so-called "distressed assets" that banks didn't want and were willing to sell off cheap. So, if you're one of millions of struggling homeowners be afraid, be very afraid.

Sept. 30th of this year saw Elizabeth Warren taking to the DC streets together along with Congressional colleagues and community activists to protest the policies of HUD and F.H.F.A in allowing sales of underwater homes at deep discounts to third party investors. The demonstration followed allegations by the New York Times that some of these debt grabbers had foreclosure malice on their minds. Take the case of Dallas headquartered Lone Star Funds whose taste for NPL's was predicated, according to the report, not on keeping families in place through affordable modifications but developing sure-fail strategies that would allow for eventual foreclosure and eviction.

The 2008 housing apocalypse produced a glut of foreclosed homes and government agencies seemed eager for schemes to milk whatever financial marrow was left in these housing carcasses. Bernanke's Fed suggested baiting a hook with a so-called Reo-to-Rental initiative (mentioned in a 2012 American Banker piece) and one of the sharks that took the bait was former Goldman trader Donald Mullen. No stranger to investment opportunities one of his e-mails famously surfaced during Senator Carl Levin's 2010 investigation into Goldman's sub-prime era transgressions. Penned in the Fall of 2007 the prescient trader proclaimed to colleagues, on the eve of the Big Short, "sounds like we will make serious money".

Mullen left Goldman in 2012 and with a purse crammed with Goldman investment cash started buying up foreclosures with a passion (using a variety of companies). The aforementioned Reo-to-Rental idea was high on the list of must-do's; in 2013 he raised a cool billion to acquire single family homes to rent and under the umbrella of Pretium Partners, an investment firm he founded along with Curt Schade, a Bear Stearns alumnus, they've snatched up thousands of new properties. Recently, Pretium scored another bunch of homes via a Freddie Mac auction and bid successfully on NPL's being dumped by controversial servicer Ocwen Financial (subject of a three part series for In These Times).

Mullen has been somewhat successful in staying below the media radar save for one amusing incident in 2011 where he was outbid by Alec Baldwin at a Hampton's art auction and another not-so-funny episode in 2013, reported in Mother Jones, where a Reo-to-Rental complex he owned in Chandler, Arizona, failed to adequately provide protection around a swimming pool. The oversight resulted in the death of two year old Zahara Cedillo who fell in and drowned.

There's gold in them thar NPL's and REO's and like the gold rushes of yore the race for riches attracts not only the Big Shots but the small fry as well. Take the case of Ronald and Karin DeConne; both retired, living comfortably in a house they bought outright in 2004, according to their White Plains based attorney, Linda Tirelli.

The same year they also decide to help their son build his dream house via cash they got by taking out a mortgage with Bank of New York. Two years later they were offered and accepted a home equity line. All went well for three years as the couple religiously paid the monthlies on both the 1st and 2nd lien loans; that is, until 2009 when Bank of New York notified the couple that it wasn't taking any further payments. There's a new sheriff in town, they were told, so sit tight and wait for the incoming loan servicer to make contact. Well, they waited for two years and then, lo and behold, a dude by the name of Mr. Craig Marx shows up on their doorsteps claiming that he now owns both liens - unpaid for two years - and while he could foreclose out of the kindness of his heart he'll assist their exit with a "gift" of 50k. The DeConne's now faced a housing nightmare that would have had a normal person's head spinning faster than Linda Blair's in the Exorcist. It seems that during the two year "respite" the DeConne's liens were sold off to a third party investor by the name of Linnear, who in turn, had sold it to Mr. Marx. Without a thought of "buyer beware" Mr. Marx had emptied his 401K to invest in what he thought was a financial home run (paying 200,000 for liens totaling 850,000). Unfortunately for Mr. Marx, but certainly good fortune for the DeConne's, the hapless investor neither obtained an appraisal, title report nor ran his intentions by a good lawyer. Worse still for Mr. Marx, the documents given to him "as is" were replete with misspellings, date errors and the title chain didn't include evidence of a transfer from Bank of New York to JP Morgan Chase (which had then unloaded the liens to Linnear). The courts did not smile beneficently on Mr. Marx's predicament; in fact, after bringing in the aforementioned legal eagle Linda Tirelli - well known for her outing of the Wells Fargo foreclosure playbook - the hammer really dropped. A Federal bankruptcy judge by the name of Robert Drain - himself notable for his holding lender's feet to very hot fires - expunged the legal claims and left Mr. Marx holding a lot of worthless paper.

If the mortgage industry had the equivalent of the Jean Hersholt Humanitarian Awards daresay none of the aforementioned investors would warrant a nomination but there are a few in this space that try to make for-profit investment work for homeowners. Jorge Newbery and his Chicago-based American Homeowner Preservation (mentioned in a 2012 American Banker post) has had mild success in re-structuring mortgage loans for hard-pressed families and believes his for-profit model, carefully picking distressed assets, not only serves to keep homeowners in place but can generate decent profits for socially minded investors. He's still a minnow in a sea full of sharks and admits that he can't compete with investment vultures tethered to huge credit lines from places like Goldman. However, with a corporate focus on homes where the value is too low for the Big Boys to want get involved, Newbery and his organization can afford to take the time to deal directly with "real folks" rather than "distressed assets."

Homeowners are the collateral damage from 2008's economic meltdown; a crisis that saw the Government as lifeguard throwing out flotation devices to Wall Street Fat Cats who happily bobbed up and down as the economy, like the Titanic, took a nose dive. These one-percenters also floated by millions of drowning homeowners who followed that Titanic to the ocean floor and while the economy has been refloated, to some extent, a sizable number of homeowners still remain shackled to the bottom.

Joel Sucher is a writer/filmmaker with Pacific Street Films and has contributed his perspective on foreclosure to publications that include American Banker, In These Times and Huffington Post.