Today, the Gateway Arch is 50 years old. Its iconic silhouette is both space age and historic. The Arch amazes visitors with its beauty, but it is so ubiquitous in St. Louis that those who see it daily don't often reflect on what it symbolizes: the Gateway to the West. 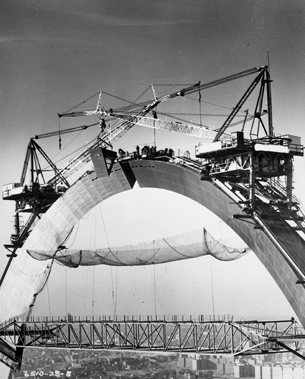 The last section of the Gateway Arch is put into place on October 28, 1965. Photo by Arteaga Studios, Jefferson National Expansion Memorial/National Park Service.

Jefferson National Expansion Memorial, the park in which the Gateway Arch stands, has a history full of this type of contradiction. Many of the park stories have a gap between the vision and the reality, what everyone thinks they know and the real truth. Let's examine five of these contradictions.

1. Jefferson National Expansion Memorial was the first park created under the Historic Sites Act, yet the first action taken to construct the park was to knock down historic buildings. 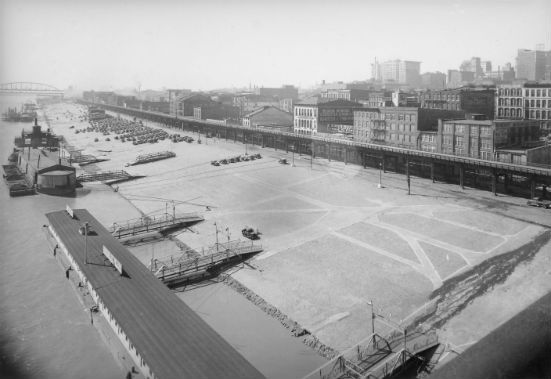 On August 21, 1935, President Franklin D. Roosevelt signed the Historic Sites Act to preserve historic sites and buildings. Jefferson National Expansion Memorial was the first national historic site created under this act. Many of the historic events associated with westward expansion took place on this formerly French colonial site. The riverfront's dilapidated brick warehouses were never the focus of the park. The National Park Service acquired 37 blocks of buildings in order to demolish them.

At the time, the argument was made that the area was unoccupied and the warehouses had lost importance when the focus of the city turned westward. The small number of residents still living in the district (less than 200) included blue-collar workers, as well as bohemian artists and proprietors of popular nightclubs where blues music performed by African-American musicians was enjoyed by white audiences visiting from other parts of the city.

The decision to remove those historic buildings, most of which dated back to the era of the pioneers moving west, would almost certainly not be one that the National Park Service would make today; in the end 37 blocks of nationally significant buildings were sacrificed to make way for what would one day become an international icon.

2. The Arch is the perfect symbol of the Gateway to the West, but the monument could have taken any shape. 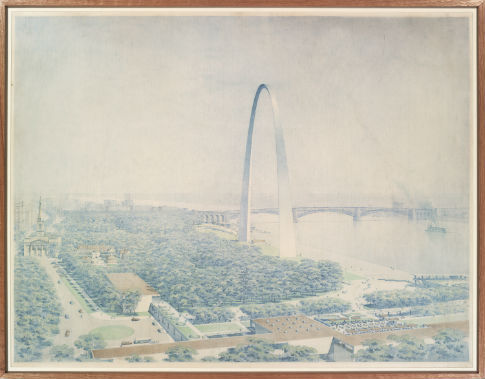 An architectural competition to determine the form of the monument was the next step. The competition brief left the shape and form of the monument up to the architects. Eero Saarinen won this competition against 171 other entrants, including many well-known architects such as Louis Kahn, Walter Gropius, Gyo Obata, Edward D. Stone, his good friends Charles and Ray Eames, and even his own father. No other entry came close to the vision and scale of Saarinen's Arch. The judges made a leap of faith that it could be constructed as designed, and their bold choice has defined the skyline of St. Louis.

3. Constructing the Gateway Arch was extremely dangerous, yet no one died or was seriously injured. 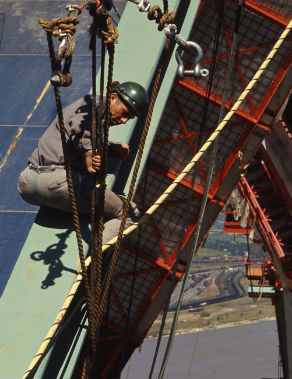 Watching Charles Guggenheim's documentary about the construction of the Gateway Arch, Monument to the Dream, visitors are amazed at the nonchalance of the men working so high above the city. It was estimated that 13 people would die during the course of construction, yet no one did -- a great testament to the skill of the workers. These men needed to have not only an expert knowledge of their trade, but the skill and flexibility to work at odd angles, in small spaces and 63 stories in the air.

4. The hiring practices of the subcontractors constructing the Gateway Arch were discriminatory, but out of the ensuing protests and attention came the first Federal action to enforce equal employment opportunity. 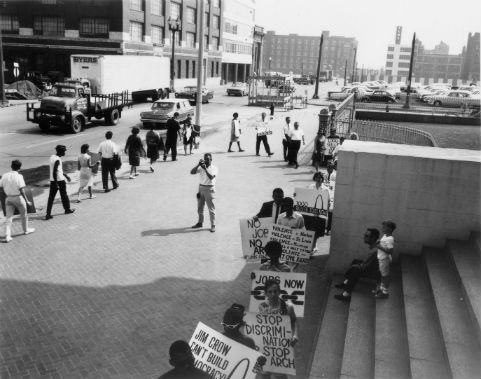 In 1964, the Congress of Racial Equality (CORE) staged protests during the Arch's construction to publicize the racially discriminatory hiring practices commonly used at the time. On July 14 two CORE activists, Percy Green and Richard Daly, scaled the Arch to protest discrimination in hiring among the building trades unions in St. Louis.. When they descended after four hours, they were arrested and charged with trespassing and resisting arrest, charges that were later dropped.

Their activism brought widespread attention to unfair hiring practices and led to the first "pattern-or-practice suit" for discrimination in hiring under Title VII of the Civil Rights Act. The U.S. Court of Appeals said that unions in a locality have an "obligation to correct or revise practices which would perpetuate racial discrimination." The dedication and passion for justice of the protestors at the Gateway Arch led to the first direct actions of the Federal Government to enforce equal employment opportunity.

5. The park's mission remains the same, but the interpretation of the story has shifted. 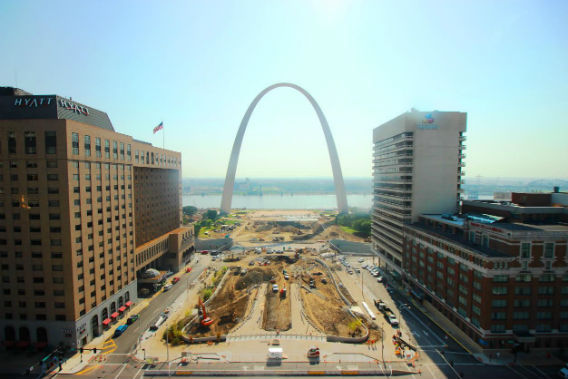 Construction on Luther Ely Smith Square, the Park Over the Highway and the new Arch Visitor Center entrance as seen from the Old Courthouse dome. Courtesy of CityArchRiver Foundation.

The mission of the park is to memorialize Thomas Jefferson, the Louisiana Purchase, and the pioneers. Since the park's designation, historians, and our society realize how wrong this vision of an empty west was, and acknowledge the damage caused to Native American life by this influx of pioneers.

Currently, the park and the surrounding riverfront and downtown area are undergoing a $380-million renovation. A brand-new museum will better reflect our evolving view of the country's past by broadening the stories told -- still telling the stories of the pioneers and Jefferson's plan, but acknowledging Native Americans and Hispanic Americans and the effect of this migration upon their societies. The story of the design and construction of the Arch, a constant source of fascination for visitors, will also be a part of this new museum.

The Gateway Arch's story continues to be written as great changes are currently underway connecting the park to the city more effectively. These new efforts should facilitate greater community between the park and the city in which it resides. But today, on its 50th anniversary, we celebrate the Arch's past, present and future.