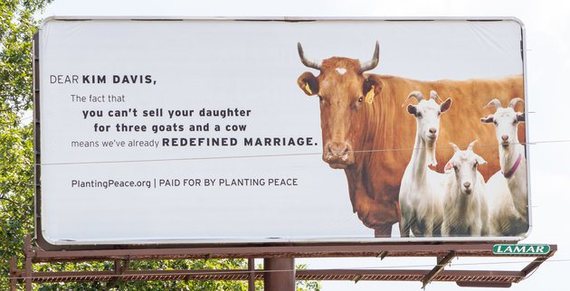 In theory the government of the United State of America operates under a separation of church and state even though contradictions are rife. We refer to God in the Pledge of Allegiance. When asked to swear an oath, once again we're pledging honesty "so help us God." And churches are tax exempt, a sticky issue rife with corruption and fraud recently examined in depth by John Oliver.

One of the troubling aspects of religion is how they have a built-in function that not just excuses bad behavior, bigotry, or outright criminality, but sometimes even promotes it. This entrenched mechanism is known as "forgiveness."

The religious often talk about forgiveness as if it's a balm of unicorn tears sent from the heaven of your choosing that miraculously heals the wounds of the past, future, and present like Dumbledore waving his wand with a magical incantation or two. POOF! Everything's all better. One of the more grotesque examples of the bane of forgiveness is how pedophile priests were officially forgiven their crimes by their brethren of the cloth, which allowed them to continue abusing children. The mind boggles and the stomach turns.

Kim Davis -- the Kentucky clerk who refuses to issue same-sex marriage licenses on account of her (newfound) religious beliefs -- is one of too many examples of a growing trend in the United States that I'm calling gateway fundamentalism.

According to Snopes, Mrs. Davis has been married four times to three different men, and she had two children out of wedlock after her second divorce. Somewhere between her third and fourth marriages she "found God" and from hence comes her reborn piousness towards the sanctity of marriage. Because through her conversion all her past sins were forgiven, she now -- without a hint of irony -- vows to uphold the sanctity of her (recent) religious beliefs.

Kim Davis's selective reading and enforcement of scripture is a troubling indicator of her personal brand of gateway fundamentalism. The Independent did a horrifying breakdown of what marriage would look like if we actually followed the Bible, and it is not pretty. Will Mrs. Davis hold herself accountable to this particular tenet: "A marriage shall be considered valid only if the wife is a virgin. If the wife is not a virgin, she shall be executed," (Deuteronomy 22:13-21)?

The kind of gateway religious fundamentalism espoused by Kim Davis in her role as an elected secular government official is part of a disturbing pattern in the United States that directly violates the separation of church and state.

Another frightening example of gateway fundamentalism is allowing government-funded public schools to teach "creationism" -- currently there are 14 states that permit this religious catechism in public schools -- demonstrating a permeating Christian fundamentalist mentality, one that rejects the validity of science and attempts to promote Biblical mythology as fact.

The congressional recent ruling to de-fund Planned Parenthood is yet one more terrifying example of gateway fundamentalism which, if left unchecked, will certainly lead to the kind of religious fundamentalism the United States claims to be fighting in the form of ISIL and others in the Middle East. Nowhere else in the developed world are women not in charge of their own bodies by law, and in particular when it relates to pregnancy or contraception. And most especially, nowhere in the developed world are rape or incest victims forced to carry pregnancies to term or do rapists have access rights to rape babies.

Earlier this year, an Indiana woman was sentenced to 20 years in prison for having a miscarriage, or as the gateway fundamentalists called it: "fetuscide."

As Wendy Davis recently said about abortion, "It is a constitutionally-protected right, like the Second Amendment [the right to bear arms]. ... We're literally forcing women into being childbearing vessels." You know who else on this planet treats their female citizens this way? The Taliban and ISIS. Let that sink in for a good moment.

When asked "Should your faith matter to voters?" Republican presidential candidate Ben Carson replied: " I guess it depends on what that faith is," and went on to say "I would not advocate that we put a Muslim in charge of this nation." Another Republican candidate Bobby Jindal said, "I'd support a Muslim candidate who'd swear on a Judeo-Christian bible." Once again, without even a hint of irony.

Just the other day I was at Whole Foods and the cashier began talking to me about her church and things her pastor says. I was politely puzzled and couldn't figure out quite why the interaction bothered me so much until a friend observed, "In light of recent events, more Americans are thinking that freedom of religious expression means they can bring it into the workplace. So long as it's the right religion, of course, and none of those filthy foreign ones."

Under the guise of Christian religious freedom -- a religious freedom that certainly does not apply to Native Americans, Muslims, Sikhs, pagans, and other religions in the same way -- our secular government institutions are being slowly but actively taken over by fundamentalist factions, that are in particular affecting the human rights of women, children, ethnic minorities, the LGBTQ community, and non-Christians, when it comes to access to education, healthcare, human rights, and so much more.

Fundamentalism is a problem regardless of the religion to which it pertains, since it brings with it a highly conservative mentality that only benefits a few. Gateway fundamentalism is the slow and steady encroachment of religion through once-secular government and democratic processes.

If we're so quick to respond to stamping out religious fundamentalism and extremism in the rest of the world, then why aren't we doing the same here at home?

This hypocrisy -- personified by Kim Davis, every member of Congress who voted to defund Planned Parenthood, Republican presidential candidates, and too many others -- needs to end before the United State's gateway Christian fundamentalism graduates to full-blown.