These last two days, I've been sitting down with British Foreign Secretary Philip Hammond, and this morning at the crack of dawn we left Washington and headed together to my hometown -- Boston -- to help ring a global alarm bell and focus on an issue that doesn't just animate President Obama and Prime Minister Cameron, but an issue that demands urgent attention from all of us: global climate change.

Seven decades later, our two countries are confronting danger -- and defeating it -- not just on the battlefield against ISIL, but we are also together confronting the kind of "gathering storms" Sir Winston also warned about -- and global climate change is one of the most critical. (Make no mistake -- big countries have to know how to walk and chew gum at the same time: we don't have the luxury of tackling one issue at a time, because the world doesn't stop turning.)

The good news is that together our countries both recognize that never before has a threat like climate change found in its solution such opportunity -- the opportunity to unleash the clean-energy economy that will not just meet the challenge of a changing climate, but take us toward a safer, more sustainable future. 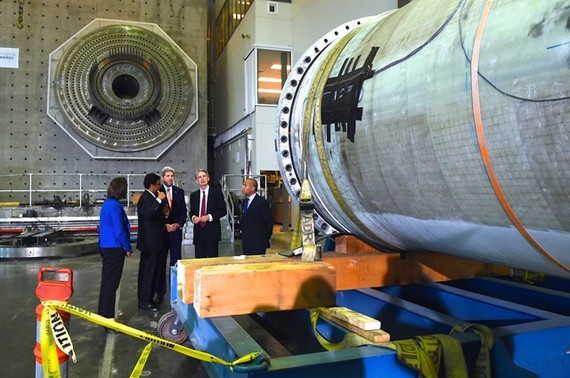 Shame on all of us if we don't act now to confront this "gathering storm."

After all, there aren't many big global challenges accompanied by decades-long "heads-ups."

It's even less often that the warnings you receive are verifiable -- rooted in scientific evidence.

But with global climate change, that's exactly what we have.

Decades of observation, monitoring, and research have demonstrated beyond a doubt that the Earth's climate is changing, that greenhouse gas emissions from human activities are to blame, and that the consequences will be devastating unless the world gets serious about reducing emissions.

This is not a distant or future challenge. Climate change is affecting millions around the world right now -- today.

This summer the planet experienced the hottest August in recorded history. Countries in Central America have been battling the worst drought in decades, and as a result, hundreds of thousands of families in rural areas are facing food shortages. And because of the rapid melting of glaciers and ice sheets, scientists predict that by the end of the century, the sea could rise a full meter. A meter may not sound like all that much, but just one meter would displace hundreds of millions of people worldwide and threaten billions in economic activity. It would put countless homes, schools, parks and beaches -- entire cities and even countries -- at risk. 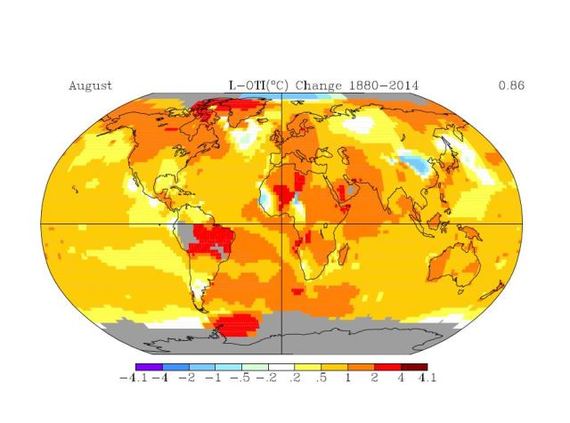 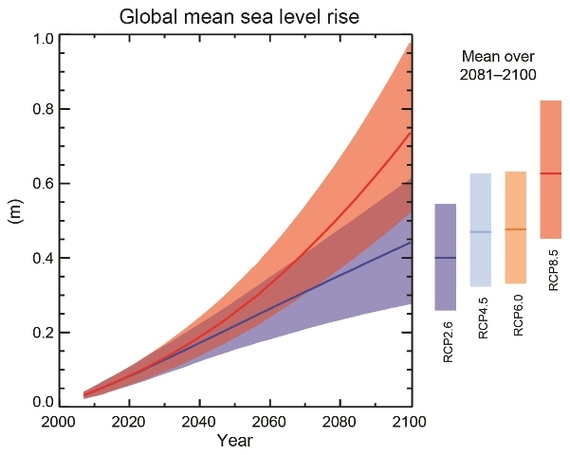 Climate change also impacts the world in ways that are a bit less obvious -- but just as devastating. Make no mistake, long-standing political, economic, religious, and ideological disputes are all the major drivers of conflict.

But those factors are no longer acting in isolation: drought and water shortages, ineffective watershed management, and the growing influence of climate variability have all played a direct role in deteriorating the economic condition and fanning the flames of conflict across places like Syria. Recently, the impacts of climate change have even been transformed into a weapon of war: In Iraq, ISIL has taken advantage of one of the worst droughts the region has seen in decades. In yet another example of its barbarity, the terrorist group closed off a major dam gate, exacerbating the shortages and forcing even more families to go without water.

So when we talk about climate change, we're not just talking about a threat to our environment. We're talking about direct challenges to national security, global stability, and so many more of the things we work to protect every day.

Don't take my word for it:

Vice Admiral Lee F. Gunn (Ret.), the president of the American Security Project, wrote that "addressing the consequences of changes in the Earth's climate is not simply about saving polar bears or preserving the beauty of mountain glaciers. Climate change is a threat to our national security. Taking it head on is about preserving our way of life."

General Gordon R. Sullivan (Ret.) -- the former Army chief of staff -- said that "climate instability will lead to instability in geopolitics and impact American military operations around the world."

Brig. General Bob Barnes (Ret.) wrote that "while most people associate global warming with droughts, rising sea levels, declining food production, species extinction and habitat destruction, fewer connect these impacts to increasing instability around the globe and the resulting threats to our national security. But the connection -- and the threat it poses -- is real and growing. And while many in the press and public have not yet focused on these threats, the U.S. military most certainly has."

Vice Admiral Richard Truly (Ret.) said, "The stresses that climate change will put on our national security will be different than any we've dealt with in the past."

General Paul J. Kern (Ret.) -- a former Commanding General for U.S. Army Material Command -- said that "military planning should view climate change as a threat to the balance of energy access, water supplies, and a healthy environment, and it should require a response."

And recent report from a panel of former Pentagon leaders declared that climate change has already become "a catalyst for conflict" against a backdrop of increasingly decentralized power structures around the world. This isn't just an issue for environmentalists or energy ministers to worry about -- it's an issue that must be a priority for foreign ministers, defense ministers -- even heads of state.

The science is clear, the threat is present, and the impacts will be felt in every corner of the globe.

The good news is that, science hasn't just given us ample warning on climate change; modern technology and innovation on both sides of the Atlantic have also provided us with the solution. Unlike many of the other global challenges we face, we know exactly how to address climate change. The answer is clean energy. It's as simple as that. The technology is out there. The policies aren't complicated.

But there's one thing that's standing in our way -- all over the world -- and that's the political will globally to make the tough choices that will bring about the clean-energy future we need.

It was inspiring to see so many people take to the streets as part of the Climate March in New York City last month, while world leaders gathered for the United Nations General Assembly. It brought me back to the first-ever Earth Day back in 1970, which was my baptism by fire as a foot soldier in the environmental movement at home Massachusetts, a national movement which ultimately led to a sea-change in environmental protection in the United States, including the creation of the U.S. Environmental Protection Agency, the Clean Air Act, the Clean Water Act, and all the landmark environmental protections we take for granted today. 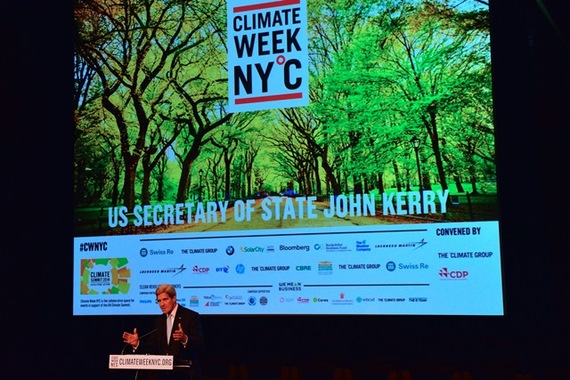 It really matters that so many are making their voices heard. I cut my teeth in grassroots politics as an activist, and I finished in politics with 29 years in the United States Senate: believe me, I know it matters -- people in public life hear those voices demanding something, and that's how an agenda -- good or bad, but never indifferent -- gets set and debated.

But now is the time for voices calling for climate action to get even louder. Speak out. Make your message echo in every city on Earth. Make this an issue that no public official can ignore another day. Make a transition toward clean energy -- through smart investments -- the inevitable, not the impossible.

At the State Department, we'll make sure climate change is front and center the broader context of international diplomacy, including by doing all we can to ensure that the world comes together around a global agreement at the Climate Conference in Paris next year. A good global agreement will not single-handedly eliminate the threat of climate change -- but the fact is, it's sure as hell hard to solve this problem without one. 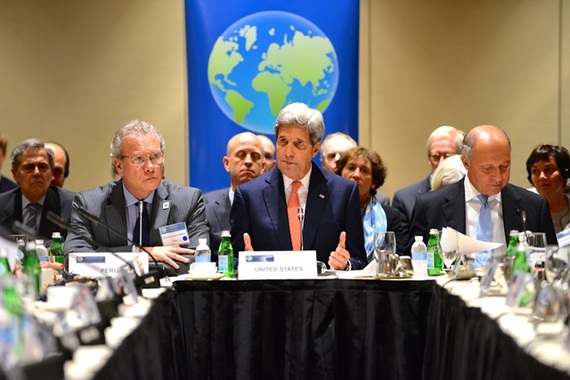 Whether we're able to address this threat will be a real test of global cooperation -- and global leadership. But we couldn't have a stronger stake in the outcome. If we put the future of the planet that unites us ahead of the issues that divide us, we can meet this challenge, and leave future generations the healthy, sustainable planet they deserve. Onwards.