The recent terrorist attacks in Brussels are telling us that terrorist attacks motivated by a radical interpretation of Islam are rapidly becoming part of normality in the Western world and especially so in Western Europe. This is an alarming trend, but it is one which will likely continue to confirm itself for some time to come. We now live in a world where we somehow need to accommodate the feeling that terrorist attacks can happen anytime and anywhere.

Let us therefore take a closer look at the opinions and attitudes that exist in European Muslim communities with regards to their relationship with the Western world. They could be described as 'Sentiments Towards Western Culture', 'Perceived Respect from Western Towards Muslim Culture' or a 'Sentiment that Muslim Culture Needs to Protect Itself from Western Culture'. When we depict a score for every individual of these communities on a continuum of sentiments, we create a distribution, which, for the sake of argument, we assume to be a Gaussian distribution around a mean (the reasoning also holds for other types of distributions).

This means that very few people have extremely positive or extremely negative sentiments towards Western Culture, while a large majority has mixed sentiments. Indeed, in the aftermath of the terrorist attacks you could see young Muslims marching to the streets of Brussels to protest and throw bottles at the police and journalists, but you could also see Muslims speaking out on how we should be tough on young Muslim fighters in Syria returning to Europe. Those with extremely negative sentiments exceed a 'terrorist threshold' and may start to seriously contemplate the possibility of attempting a terrorist attack.

While the people at the extreme left end of the Gaussian distribution are the problem, they are not the key to the solution. Government security services are working hard to detect and dismantle extremist groups and they most certainly need to continue doing so. A society can never accept the primitive cruelty that is terrorism. However, in the long run, these actions alone will never solve the problem. Every time the extreme left end part of the Gaussian distribution is erased, it will automatically refill itself, like a fluid, meaning that there will always appear new terrorists to replace the ones that have been caught. Even worse, anti-terrorism actions have the potential of generating more antagonism, moving the entire Gaussian further to the left and causing even more terrorist threats.

This image can also help us understand where the relatively recent phenomenon of terrorist attacks involving second or third generation European Muslims comes from. Something must have changed for this to start happening. In the simplest scenario, we could imagine that in the past few decades the center of the Gaussian distribution has moved to the left, meaning that the average sentiments in European Muslim communities towards Western Culture have become more negative. The causes of this are many, but certainly they are related to the military involvement of Western countries in Muslim countries and the difficulties related to the integration of Muslim communities in Europe. With the center moving to the left, the whole distribution has moved to the left, and some people have now exceeded the 'terrorist threshold'-thus creating the situation we occupy today. 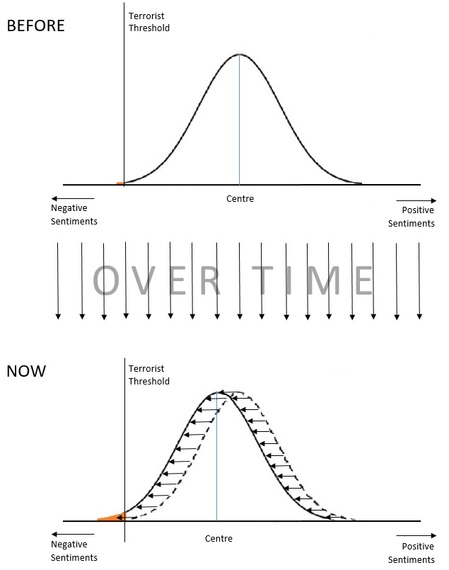 If this analysis is true, it also holds the key to the solution, because it implies that we need to engage with the people at the center of the Gaussian distribution and see how we can move these people back to the right, in the direction of more positive sentiments towards Western culture. This is good news, because contrary to terrorists, the people in the middle of the distribution are very much part of Western societies and are certainly more willing to engage in open conversation. The extreme left end of the Gaussian distribution will again follow the center, but this time towards the desired side of the 'terrorist threshold'. How can we achieve this?

The answer is simple, although it goes against some deeply embedded instincts and is becoming more difficult while we are being antagonized by the terrorist attacks. Nevertheless, the need for this answer is more pressing than ever. As non-Muslim Westerners, we need to show more respect for the virtues of Muslim culture and invest more actively in an authentic engagement with the Muslims in our communities. We need to be humbler about the merits of our Western culture and develop a better understanding of what our culture looks like from an outside perspective. We need to appreciate more that there are important and profound things we can learn from other cultures, including Muslim culture.

In a perverted but profound way, the terrorist attacks are questioning the truthfulness of our Western values. What are they worth once the pressure is on? The answer will lie in our actions. If we manage to keep our minds open and defend the universality of our values in this time of adversity, we will prove that Western culture truly has something to contribute to a globally advancing humanism. If we do not, then the terrorists got the answer they already knew, that once the going gets tough, Westerners will abandon their values and happily trade them in for self-protection and self-interest.

Evidently, a similar reasoning holds true for the Muslim communities living in Europe. They also will need to commit themselves and engage more actively with moderate non-Muslim Westerners. As I argued before, we will not get over these difficulties without expanding what we now accept as our individual responsibility as a citizen. Over time, inevitably, European Muslim and Western culture will learn from each other and adapt to each other. It is up to all of us to decide with how much friction we want these tectonic culture movements to happen.

Stefan Jansen, PhD is Belgian and works as a Senior Researcher at the University of Rwanda. He is Ag. Deputy Director of the Center for Mental Health in the College of Medicine and Health Sciences. He also worked for Doctors without Borders in Afghanistan in 2001-2002. These and others experiences have helped him to see more clearly the boundaries and limitations of a Western understanding of the world.