Now that the Great Recession has been declared dead and gone by everyone who failed to see the possibility of it happening in the first place, it is important to examine the reasons for its demise.

The White House has been busy declaring that its stimulus policies have created or saved 640,000 jobs. We should note that the White House originally claimed credit for 1 million jobs, and only revised them down after realizing that they are spending $234,000 for each job saved. More revisions are sure to come.

It's also important to note that the job number is based on mathematical calculations and is impossible to prove.

One thing that can't be denied is that the stimulus did have an effect on the economy. It's this impact that needs to be examined further.

Getting Rich on Klunkers

The impact of the Cash 4 Clunkers program cannot be understated.

Without the Cash 4 Clunkers program, the GDP number would have come in at about 2%, rather than 3.5%.

A valid way to evaluate the program economically, it says, is to look at how many people purchased cars that otherwise wouldn't have been bought. The firm says that that number is about 125,000 cars. By that measure, the government spent $24,000 to generate each sale of a new car. 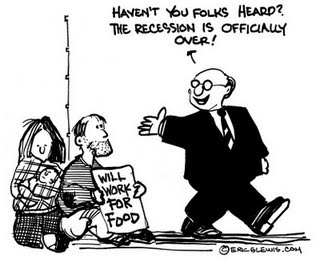 Getting Rich on Bonds

Most people didn't notice the news from the Federal Reserve yesterday. They announced an end to the monetization of Treasury bonds.

The Federal Reserve has created $300 Billion out of thin air over the last seven months to purchase Treasury bonds. This program is now over.

"Some of the reality starting to hit the market: [T]hat the biggest buyer in the world will some day become the biggest seller," said Kevin Giddis, managing director of fixed income for Morgan Keegan & Co.

"These levels can't sustain themselves," he said, referring to bond yields.

The Federal Reserve bought 50% of all new Treasury bonds issued in the 2nd Quarter.

The monetization of these Treasuries has helped keep interest rates low, thus allowing the federal government to borrow at artificially low rates. The cost of this program has been a falling dollar, a cost paid by all the dollar savers of the world.

It has also given the housing sector a temporary and artificial boost. This program won't be there for most of the 4th Quarter.

The Federal Reserve has also been active in buying mortgage-backed securities from Fannie Mae and Freddie Mac in order to prop up the market. The massive $1.45 trillion program is supposed to finish by the end of the year. As posted on Bloomberg news:

The Federal Reserve said it will slow its purchases of mortgage-backed securities and housing- agency bonds while noting that the U.S. economy has strengthened.
...

The Fed's purchases "have been essential," Julia Coronado, senior U.S. economist at BNP Paribas SA in New York, and a former member of the Fed Board forecasting staff, said before the announcement. "Without that liquidity, there would be a much worse outcome in the housing market."

Like the Treasury bond program, the Fed has been the largest buyer of agency bonds, by far.

The Fed has already used most of the money allocated to this program. While the program isn't over, it will be winding down. 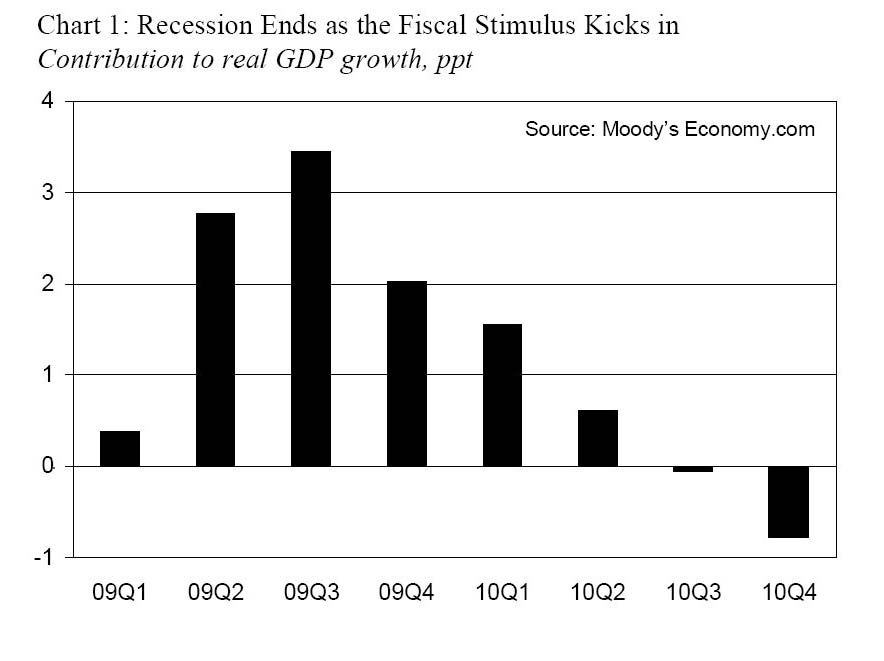 Getting Rich on Houses

Judging from the latest developments, it appears that the Obama Administration is about to OK an extension and expansion of the first-time homebuyers tax credit.

When it comes to assessing the many government programs designed to alleviate the housing crisis, you have to put it into perspective. 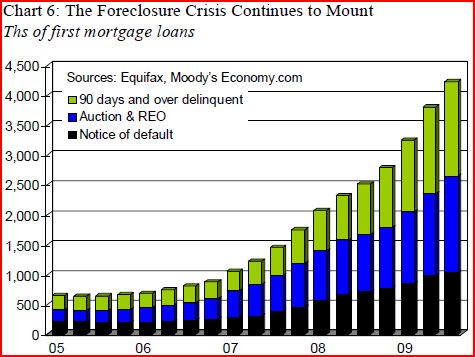 The first-time homebuyers tax credit has many things in common with the Cash 4 Clunkers program. For instance, it steals future home purchases from the future.

"The buyers I'm working with were looking at apartments and debating whether to buy," said Adina Greenberg, a real estate agent at The Corcoran Group, the largest residential real estate firm in New York City. "Knowing the first-time home buyer tax credit was ending, they decided: 'Let's do it now.'"

Another thing it has in common is that it is extremely expensive for what it tries to do.

"In about four out of five cases, the tax credit went to people who would have bought a home anyway, so that means the real cost of getting that one extra buyer into the market is five times $8,000 -- about $40,000," said Andrew Jakabovics, associate director for housing and economics at the Center for American Progress, a Washington, D.C.-based think tank.

And like the Cash 4 Clunkers program, it has been plagued with fraud.

Treasury Inspector General for Tax Administration J. Russell George told a House panel that more than 19,000 people filed 2008 tax returns or amended returns claiming the credit for homes they had not yet purchased. Those claims amounted to $139 million and it was not clear that the IRS planned to go back to verify that those purchases actually took place, he said.

George said his office had identified another $500 million in claims, by some 74,000 taxpayers, where there were indications of prior home ownership.

Like the taxpayer bailout of Wall Street last year, Congress threw taxpayer money at a problem without putting even a modest amount of accounting and anti-fraud checks on the program.

Among those claiming bogus credits, at least some of them were definitely first-timers. The credit has already been claimed by 500 people under the age of 18, including a four-year-old.
...

Mr. George said his staff has found at least 53 cases of IRS employees filing "illegal or inappropriate" claims for the credit. "In all honesty this is an interim report. I expect that the number would be much larger than that number," he said.

This tax credit's cost is running about $1 billion a month.

One can only wonder how much fraud we'll see as the program is extended and expanded. We also must wonder how much good would have been done if the money had instead been directed to keeping people from losing their homes in the first place.

Finally, the program's extension will have diminishing effects in the future. The number of people who rushed out to purchase homes to take advantage of the tax credit before the deadline will dwindle, and now people know that there is no longer a rush.

Getting Rich on War 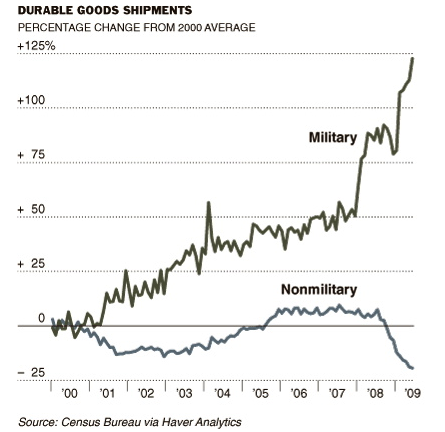 Many people seem to have forgotten that we are currently engaged in two expensive wars. Wars are the traditional way for governments to stimulate the economy (and silence dissent).

America of today is no exception.

To summarize this, we would have had no economic growth in the 3rd Quarter if it wasn't for federal government stimulus spending. "If not for all the government incursion into the economy in Q3, real GDP basically would have stagnated."

Some may think that it doesn't matter how the economy grows as long as it grows. Those people don't understand how things work in the real world.

Whether the recovery becomes self-sustaining or recedes back into recession depends first on how businesses respond to recent improvements in sales and profitability. As the benefit of the stimulus fades, businesses must fill the void by hiring and investing more actively. To date, there is not much evidence that they are doing this. At most, firms are curtailing layoffs and no longer cutting back on orders for equipment and software.

... Unless hiring revives, job growth will not resume and unemployment will continue to rise, depressing wages and ultimately short-circuiting consumer spending and the recovery itself.

It is possible that firms will resume hiring soon. There is historically a lag between a pickup in production and increased hiring. In the past, however, during the gap between increased production and increased full-time hiring, businesses boosted working hours and brought on more temporary employees. None of this has happened so far; hours worked remain stuck at a record low, and temporary jobs continue to decline.

... Businesses may also wonder if demand for their products will soon fade, given that the recent improvement is supported by the monetary and fiscal stimulus and an inventory swing, all of which are temporary.

Some say that the stimulus wasn't big enough. In fact the opposite is true. The stimulus so far has been unprecedented in size and scope.

In all the previous post-WWII recessions before this one, the average fiscal stimulus has been 2.6% of GDP, with monetary stimulus adding another 0.3% of GDP. During the Great Depression the government came up with a combined 8.3% of GDP in stimulus.

So far in this recession the government has responded with fiscal stimulus of 18% of GDP, and another 11.9% of GDP with monetary stimulus. That's a combined 29.9% of GDP, or 10 times the normal average.

And all this has gotten us is GDP growth of a little more than 3% if we are lucky. Or to put it another way, we've added 9 dollars of debt for every 1 dollar of growth.

This stimulus spending isn't free money. It comes at a cost.

I'm not just talking about the burden on future taxpayers yet unborn, although that is the most obvious, and immoral, cost. There are also more immediate costs.

Because of the housing and auto subsidies, the personal savings rate plunged to 3.3% in Q3 from 4.9% in Q2 -- in the past quarter-century, there have been only four other times that the savings rate went down so much in one quarter. If not for that plunge in savings, real GDP actually would have contracted fractionally last quarter. The entire GDP growth was funded by a rundown in the savings rate that occurs less than 5% of the time.

You have to wonder about the wisdom of encouraging people with no savings to borrow more money at a time when there are no jobs. That's like encouraging a habitual gambler to bet his mortgage at blackjack - what if the bet fails? 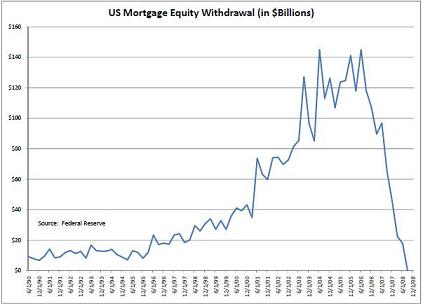 The question has to be asked, if companies, both non-financial and financial, are big believers in this new post-recession V-shaped recovery that seems to have the hedge funds and most strategists excited, why are companies still cutting back in capital expenditures and inventories and why are banks still cutting back on lending at an unprecedented 15% annual rate? 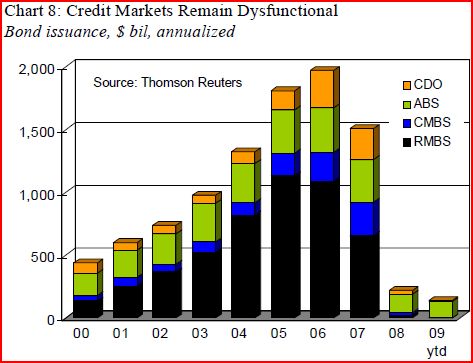 The big money, the smart money, isn't investing on the 3rd Quarter GDP numbers. You should be skeptical too.