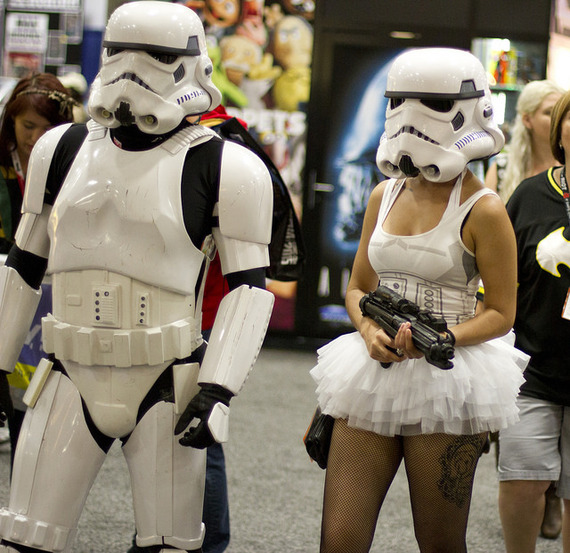 I'm partial to geeks. I am one, actually. Old School science nerd from 'way back.

Which is how I found a research paper about them in a PLOSOne newsletter while browsing a list of peer reviewed articles with titles like "Techno-Cultural Characterization of the MIS 5 (c. 105 - 90 Ka) Lithic Industries at Blombos Cave, Southern Cape, South Africa" and -- I kid you not -- "Application of Network Scale Up Method in the Estimation of Population Size for Men Who Have Sex with Men in Shanghai, China."

That last one was undeniably tempting, until I found this:

"A Psychological Exploration of Engagement in Geek Culture"

I mean, I'm the mother of a girl child who was playing video games online for hours with kids from all over the globe internationally at the age of say, sevenish. I can scat the theme songs of several of those games and anime classics like Cowboy Bebop and Naruto - -binged on all 600 plus episodes of that last one for weeks and weeks and weeks and weeks...

So I know something about engagement in geek culture.

But Jessica McCain, M.S. and W. Keith Campbell, Ph.D. know a whole lot more. And after wading through their painstaking, peer-reviewed research paper, I realized I'd lost a lot of brain cells since I conducted the far less painstaking research that went into my master's thesis over 20 years ago.

So I sent out an S-O-S to McCain and Campbell, who graciously agreed to answer a few questions via email. The first of which was, simply, "Why study Geek Culture?"

"I think it was a combination of three things," Campbell said. "First, it is a booming cultural area. It has taken over a large cultural and economic terrain in a relatively short period of time, but received relatively little attention from researchers in psychology. Second, engagement is geek culture involves a very interesting shift in identity, whether it be role playing a character in a game or a costume in cosplay. This makes geek culture a potentially interesting place to study from a personality perspective. And, third, from a more personal perspective many members of the lab are involved in geek cultural activity. This made the research somewhat fun to do."

The key "takeaway" there is that Geek Culture is, indeed, booming. In fact, many Geek Culture obsessions have gone mainstream. And there are some very important reasons for this. Reasons that parents and the world-at-large may need to be more interested in and concerned about.

"The idea is that narcissism has been increasing over time in our culture," McCain explained. "We tell everyone they have to be 'special' and somehow stand above their peers to be worthwhile. At the same time, the economy has tanked and opportunities to be 'awesome' are becoming more rare, especially for the current generation."

How does an awesome individual cope with this? By entering a comic book or video game fantasy world which "allows individuals who are high in narcissism to feel special."

"In real life, not everyone can be the high powered executive or the adored celebrity," McCain explained. "But in fantasy everyone can be Thor, or a powerful wizard, or whatever they like."

And there's more. In fact, here's the rest of her response as written -- it's that important:

"Another thing that may be dwindling for the current generation is the feeling that they belong. As we lead increasingly individualistic lives, conventional ways of connecting are going away. Instead of talking to our neighbors or joining civic organizations, people may be rallying around what's available, which is media. It also helps that in geek culture, no one cares about your looks or your socioeconomic status, really -- as long as you truly love Dr. Who, or Batman, then you're in...

Our final hypothesis relates to the common belief that geeks are more intelligent and creative and may be bored with mainstream media. We hypothesized that geeks like sci-fi, fantasy, and roleplaying because it is more stimulating and more participatory. Creativity plays a big role in geek culture--for example, in cosplay contests, your costume is more valued if you made it yourself than if you bought it from a store. Coming up with novel costumes such as a 'zombie Stormtrooper' is encouraged."

Where have we heard this before? Only everywhere. Young people feel lost, young people are bored, young people need something to believe in -- we know that. But what can we do about it?

Campbell says plenty. In fact, he believes educators might want to take a lesson or two from Geek Culture.

"I think that there is reason to encourage geek cultural engagement," Campbell said. "Either to use it to teach things -- I use examples of Game of Thrones characters to teach personality, for example -- or even to help students find interest areas, like computer programming, design, etc."

"The number one thing we want to clarify is that we are not saying geeks are pathologically narcissistic or schizotypal," McCain hastened to add. "What we are finding are slightly elevated narcissism and schizotypy relative to the general population, and that's not necessarily a bad thing. Narcissism can be related to positive leadership outcomes and schizotypy is related to creativity."

So, we actually need a few more zombie Stormtroopers to march us toward a brighter--and perhaps smarter--future.

Save the date for that next Comic Con, mom and dad. The force is already with you. Locked in the bedroom. Watching the 400th episode of Naruto. Do not disturb.

Jessica McCain, M.S., is a fourth year graduate student in the MER Lab at the Univeristy of Georgia. In the course of earning her Ph.D. in Behavior and Brain Sciences, she has been a contributing author to nine articles and spoken at the 2015 meeting of the Association for Psychological Science (APS).

W. Keith Campbell, Ph.D., Professor of Psychology at the University of Georgia, is the author of more than 100 scientific articles, chapters and the books, including When You Love a Man Who Loves Himself: How to Deal with a One-way Relationship; The Narcissism Epidemic: Living in the Age of Entitlement (with Jean Twenge); and The Handbook of Narcissism and Narcissistic Personality Disorder: Theoretical Approaches, Empirical Findings, and Treatments (with Josh Miller).