The lady blocks my way as I try to walk into the bathroom, I go to walk around her, she's looking me right in the face and when I try to dodge her she sidesteps into my path again, we do a little dance, her challenging me, me trying to walk in the door, coincidentally I need to pee.

Eventually, she lets me in with a suspicious little squint in her eye and when I'm sitting on the toilet I can see her sensible shoes standing guard outside. For some reason I make sure to pee loudly. She lets me leave and I'm struck with a bad case of the staircase wit, Treppenwitz the Germans call it, where one's mind is suddenly flooded with witty retorts to a situation you've just left. In my head they get more and more aggressive, going as far as remaining silent and just flashing my boobs at her. If anything grants entitlement to the ladies' bathroom, surely they do.

Because that was her problem, she thought I was a man. This isn't unusual for me, it happens all the time. People are just usually less defensive about the whole thing; they'll stride into the loos, see me, stop in their tracks and do a double take on the sign on the door, confirm that they really did see a stick figure with a skirt and then proceed with caution and a few stares as I wash my hands and try not to do anything to make them uncomfortable, like stare back. 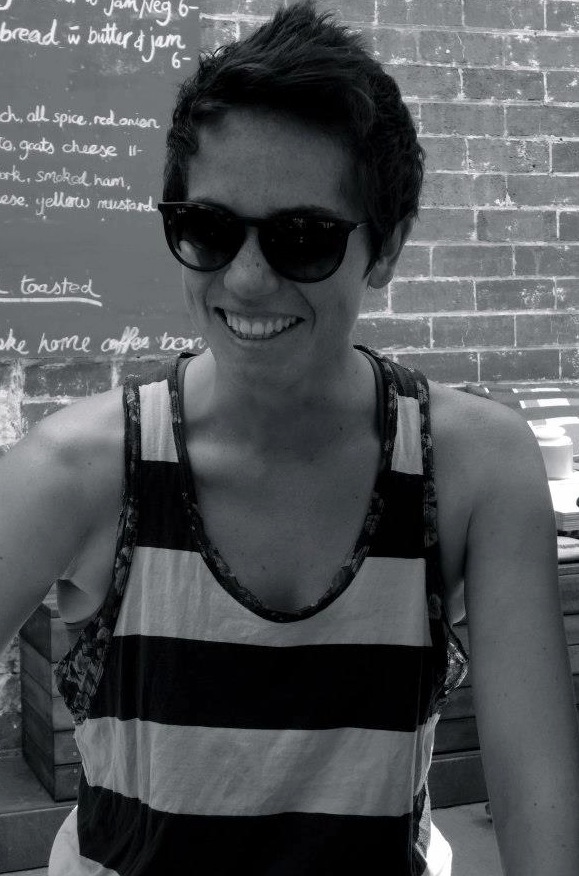 Life is just fine for me in every other aspect of life, I frolic freely in my androgyny and it's not until those moments when your gender is asked of you that confusion ensues. Everyone does the calculations, you have to: He, she, her, him. What shall we call our baby?

There are the odd perks, the airline employee who when inspecting my boarding pass declared I couldn't possibly be Olivia. I am and after a slightly too long pause with a jetlagged sigh told her so. The apologetic mortification that she felt lead to exceptional in-flight service and bottle of wine to take home. Then of course, the times when the ladies' has a line stretching to infinity and I stride with confidence into the near-empty mens'.

The cringe factor is the extreme embarrassment people feel when they get it wrong. They have mistaken your place in the most basic division of humanity. The fact is that the world cradles gender identity at its core, and its only when you hover in the in between that it is blindingly obvious.

So when I see a fellow androgyne it warms my heart.

Although the best feeling, is not having to think about it. Attending a transgender event in Sydney where near everyone there blurred gender in some way, I felt my gender arithmetic fade away and free from everyone else's judgement, I could spread my legs a little wider, allow the armpit hair to flow in the breeze. I'm serious.

Such moments are only an oasis. No matter how comfortable I become with myself, it's nearly impossible to filter out the discomfort of the wider world and it's the placing of otherness on oneself that stays with you.

The worst part is when people want you to change. My driver's license has a very fresh-faced, big-eyed, long-haired version of me on it. The sort of pretty enthusiasm that appeals to a gendered bias in many of us. The pleading look and "Aw, why did you cut your hair?" gets old, fast. Not least because the hair cutting and androgynous appearance is such a deliberated step towards self comfort and away from the gender conventions that have informed my life since I developed a sense of social awareness.

Childhood photos, to the untrained eye catalogue a tomboy growing into a woman, then a shift back to a taller slightly more smart casual version of the tomboy. Whereas for me it reads more as an oscillation between a sense of self and a conformist very unfun kind of drag.

My point is that it is effortful for me to not be as I am. Feminine photos are just stills in time, that belie the reluctance to be that way. With a photo you cannot see the discord between how I dressed and how I moved.

So when I read articles about the wonderful gender non-conformists who refuse to identify as either male or female, I feel happy. I love how they refuse to select the binary asked of them because I know absolutely the space that they occupy.

Not to say that gender doesn't exist or that it is not important. It exists with complete certainty, think about transgender children standing up in the face of everything that's ever been told to them and saying: I am a boy. I am a girl. It is extremely important to them.

I can't very well stand up and say I am a man, but it's almost what I'm doing when I walk into the men's toilet. If I declare my womanhood by walking into the ladies', it's challenged on a regular basis. Gender has to be more than a passing perception.

Gender can be explained on a spectrum, along with sexuality. But what then does the gender spectrum do to the sexuality spectrum, with each end defined exclusively by a choice between genders? What then are we supposed to conclude? That there is plurality in everything? That just maybe we should accept people as they are?