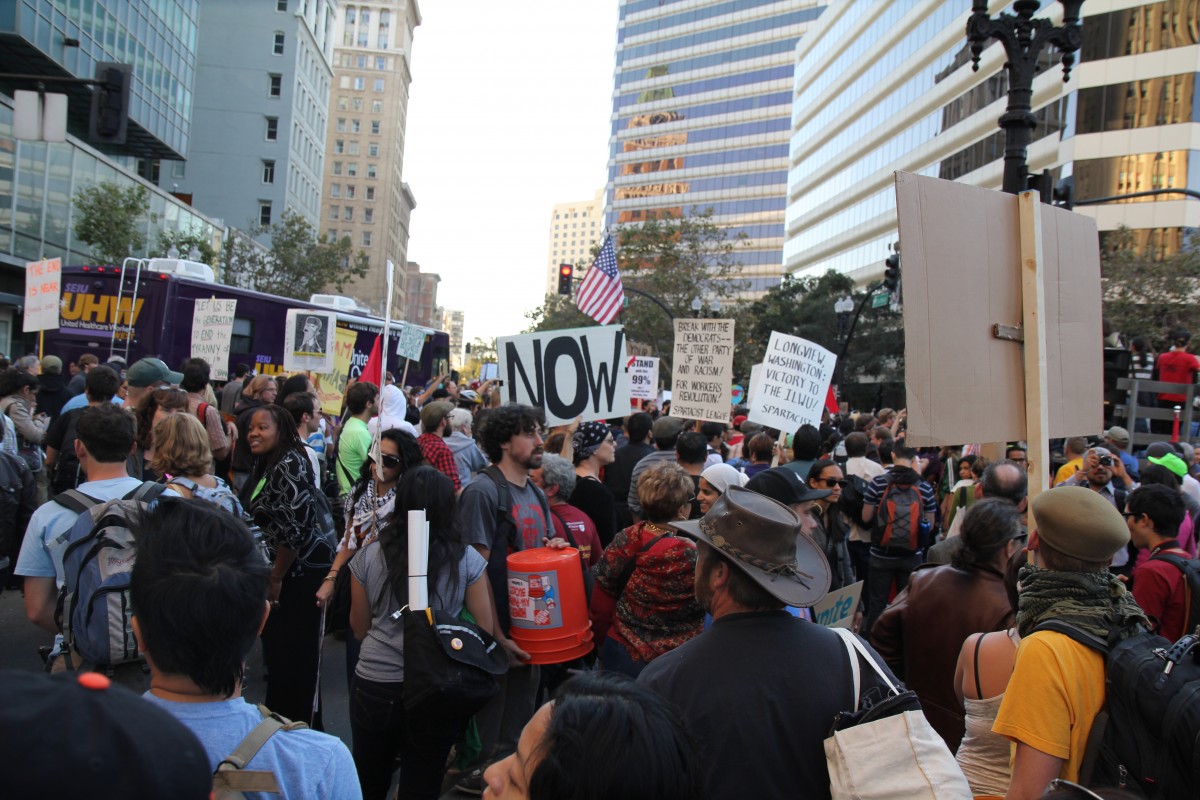 On Wednesday November 2, 2011 an estimated 4,500 protesters joined Occupy Oakland's general strike in Downtown Oakland. There were various ethnic groups represented, as well as all ages, including parents who brought their kids. Turnstyle spoke to Jaime Spector, who brought her two-year-old daughter to the strike and said it was important that every generation be represented there so that the message would resonate broadly.

TS: Why is it important for you to bring your daughter to this protest?

SPECTOR: Well, as we know, there is no movement if it doesn't have all the generations. It's important to have newborns and people in wheelchairs, you know, [people] who aren't walking anymore ...everyone is part of the story and its going to be part of the solution. Whether it's the wisdom of young people expressing themselves to the wisdom of elders expressing themselves, you know everyone is an important part. It's important for her to see and learn and just to take part.

TS: Is it hard to explain to a two-year-old why we're protesting and why are so many people out in the streets?

SPECTOR: Not at all. It's extremely easy. It's very simple, even a two-year-old can understand it. The system doesn't work, whether its people having to work long hours -- why aren't you home if you have to work so long to make enough money to pay back student debt, student loans? She's very perceptive, and she sees if there's homeless people on the street and that they're sitting and they have no home. She sees that, any child can see that, why don't they have a home? I think it's actually pretty elementary.

Another mom attending the march explained to her two sons why they weren't in school that day. Tahira Simon says it's important to explain the strike to kids with a context they can relate to.

TAHIRA SIMON: I tried to relate to the Civil Rights movement and that this is how change happens with public policy. That people have to actually organize and speak effectively and have a true goal...And they understand the concept of money greatly because I am constantly out of work over the last three years and we have had to change our lifestyles significantly. So they gone from having a luxurious lifestyle to we share a one bedroom apartment, we don't have privacy. They see the changes mom has had to make because of inconsistencies in our economy, so they're directly affected and I try to explain to them that this affects the amount of mommy can put towards your college education. At some point our conversations will start to change, as to whether or not college is going to be an option whether or not it will be worth it.