PARIS -- The Palais Garnier was packed last week for the world premiere of a new production of the ballet "Boléro" co-created by artist Marina Abramovic. As the curtain was about to be drawn, ARTINFO France noticed Kanye West seated nearby in the famous plush red seats, as well as Paris mayoral candidate Anne Hidalgo. In the pit, the orchestra of the Paris National Opera, led by the Estonian conductor Vello Pähn, kicked things off, launching into the first drum rolls of Maurice Ravel's "Boléro" (1928), as onstage a tribal army advanced threateningly, its feet thumping to the beat of the music. 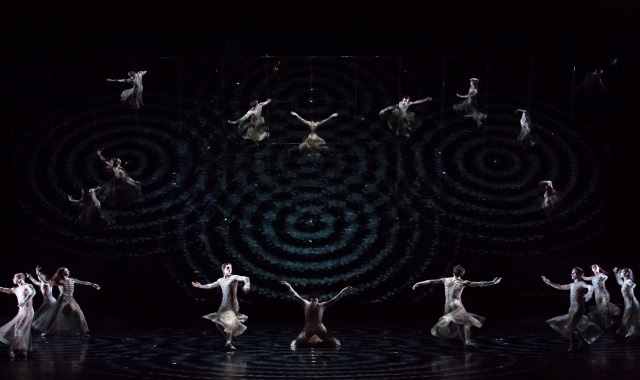 
The military, shadowy, and industrial aspects of "Boléro" have been played up by Abramovic and the ballet's co-creators, Belgian choreographers Sibi Larbi Cherkaoui and Damien Jalet. The performance artist, who had never worked on a ballet before, also designed the set, creating a spectacular design based on a very simple idea: a tilted mirror replaces the back of the stage, creating doubles of the dancers. The temporal and spatial points of reference that are so important in dance became confused. The energy of the bodies was multiplied. And it was easy to recognize, in the dark, mechanical parade of the first seconds, the mark of the Belgrade-born artist. This opening also recalled Ravel's fascination with the regular rhythm of the machines at his brother's factory, which he visited several times while composing "Boléro."

Despite its martial opening, this "Boléro" was incredibly fluid. Black soon gave way to the white of transparent veils. The pounding of the drums yielded to the refrains of the flute. The dancers, most of whom were stars of the Paris Opera Ballet, spun around like whirling dervishes caught in a trance -- but a gentle trance. The bodies were anchored to the ground, supple and sensual, but at the same time almost ethereal, constantly submitted to an upward force.

As so often in Sibi Larbi Cherkaoui's work, the dancing was liquid and wave-like. It was all about turning. The extended arms, the shoulders, and the heads all drew the dancers into a continuous circular movement. This production focuses on the centrifugal force of "Boléro." When the ballet was first staged in 1928, the dancer Ida Rubinstein, standing on a cabaret table, also spun without stopping. But her performance was as furious and demoniacal as this "Boléro" is divine.

The dominant impression was one of exquisite gentleness, floating magic, and hypnotic power, as when solitary spinning dancers formed circles of two or three, like shining constellations on a black background. The couples and trios almost seemed to fly away, like those painted by Chagall on the opera house's ceiling. Although vital, this version is also calm, which may irritate some spectators. But it has the added merit of playing the androgyny card (thanks to clever costuming), which recalls Maurice Béjart's "Boléro" from 1960, in which roles were randomly danced by men and women. This new production has also gotten rid of the hierarchies of the Opera ballet by preferring collective performance to soloists.

At the end, the public applauded lengthily. Abramovic, dressed in black, came out on stage along with Pähn, Cherkaoui, and Jalet, and costume designer Riccardo Tisci. Kanye West looked completely won over.

"Boléro" continues at the National Opera of Paris through June 3.