Known as Germany's most famous swing guitarist, the now 91 year old Coco Schumann has played with jazz greats like Marlene Dietrich, Ella Fitzgerald, Dizzy Gillespie, and Louis Armstrong. Yet until the 1980s none of his colleagues knew of his experience in the Holocaust. Coco didn't speak about "it." Not even his closest friends knew what had happened to him except for the barest of facts Coco volunteered.

"I was in Theresienstadt and Auschwitz," he would say and leave it at that.
But then on a visit to the Bavarian countryside, a group of youngsters were drinking at a table next to him. The more beer they drank, the louder they declared their convictions that the Holocaust never happened. "I'm sorry," Coco injected politely before he got up to leave. "I know better. I was there." After nearly half a century, the encounter forced him to break his silence. Now he knew he had to share his story.

I have known Coco Schumann for more than 20 years, and when I met him he asked me to co-author his autobiography, The Ghetto Swinger, which is now being published in English for the first time. I also give an update on his incredible life story in my new book Bouncing Forward: Transforming Bad Breaks into Breakthroughs.

In 1943, at 19 years old, Coco was turned in by a snitch for being Jewish and playing "forbidden" jazz in underground swing clubs in Berlin. The Nazis deported him to Theresienstadt. In its earlier years, Theresienstadt was not yet a death camp. "It was the flagship-ghetto the Nazis showed the world," says Coco. Much to his astonishment, Coco discovered a coffeehouse shortly after his arrival.

"A coffee house! In the ghetto! I couldn't believe my eyes."

There, Coco found the legendary Ghetto Swingers playing the music of Count Basie and Duke Ellington that the Nazis had long outlawed in the rest of Germany -- a surreal background tune to the cataclysm of the war. Because the Ghetto Swingers' drummer had been deported to Auschwitz a few days before, Coco took his place. They played every day.

"We feigned a normal life. We tried to forget that there was an impenetrable fence all around."

In a propaganda film, Hitler tried to pass off Theresienstadt as a summer camp for Jewish tourists. Kids had to call the camp leaders "uncle" and grumble in front of the cameras about the rich food while the Ghetto Swingers played upbeat rhythms of "You Can't Stop Me From Dreaming." In brand-new black suits (which they had to return the next day), the musicians served as extras in one of the most cynical pieces of Nazi propaganda. The Nazis promised that they would reward all of the participants in the film by releasing them into freedom.

But every illusion of normalcy was a sham. "After the film shooting," says Coco, his voice breaking, "We were all immediately deported to Auschwitz, many of us straight into the gas chamber." Only three of the sixteen musicians survived.

"Take a good look," the commander told them upon arrival, while the emaciated prisoners lined up before him, stripped stark naked. "This is the extermination camp Auschwitz. You've already passed the entrance, and this" -- he pointed to the fuming chimneys -- "is the exit."

Auschwitz had all the elements of trauma in surplus: starvation, torture, random acts of cruelty, mass murder of innocent children and family members and no escape.

Despite being surrounded by the stench of death, commanders competed for the best bands. The death camp was beyond reason and laws anyway, and the camp commanders cultivated their love for the jazz arrangements their propaganda minister had forbidden. Immediately upon his arrival, Coco Schumann was asked to start a band, together with two other members from the Ghetto Swingers. He spent his first evening in Auschwitz jamming popular tunes from the Hamburg red-light district. "The music," Coco keeps repeating, "saved our lives."

Coco had to play for the SS hangmen, "for hours and hours every day, especially when they tattooed the new arrivals, because they considered it such boring work."

Because he was such an outstanding musician, the commanders allowed Coco to pick sturdy boots, an essential tool for survival in the frostbiting Polish winter. Extra portions of food saved Coco from dwindling away like so many of the withered men around him.

"The human is a peculiar creation," Coco ponders. "Unpredictable and merciless. What we saw in those days was unbearable, and yet we bore it. We played the tunes to it, for the sake of our bare survival. We played music in hell."

When the Americans dismantled the camps, liberation reached Coco almost too late: Just a few days before the end of the Nazi regime, he had contracted the dreaded spotted fever. He and one other man were the only ones to survive the sick bay. When he was finally able to return home to Berlin, he learned that his grandparents, aunts, uncles, and cousins had perished in the camps. But he found his parents alive. Coco's non-Jewish father had ingeniously succeeded in keeping his Jewish wife hidden from the Nazis by declaring her dead after a disastrous fire.

When I asked Coco what kept him going after Auschwitz, he said, "I decided I could either live the rest of my life being broken by Auschwitz or be joyful that I survived." 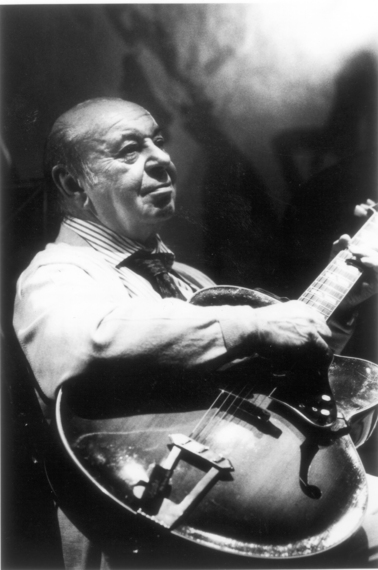 To this day he refuses to be defined by his stay in the death camps. "I am a musician who survived the concentration camp. Not a Holocaust survivor who happens to make music."

All the while, life kept showing its harsh face: his wife of sixty years was diagnosed with Alzheimer's and died a slow death. A heart attack slowed him down. And yet, Coco is one of the most joyful people you could ever meet. He is not the kind of entertainer who puts on a false smile and cracks jokes when in front of an audience, but a truly joyous person through and through. On the wall in his modest track house in Berlin, he has pinned Charlie Chaplin's famous motto, "A day without laughter is a day wasted."

A well-known German newspaper once printed a headline above a profile of him: "Coco Schumann -- the horrible life of a jazz legend."

Coco has a different perspective. "But that's not true. No, my dear, I tell myself, looking at this bright planet, it was a wild and colorful ride, at times too long, but always too short, life has shown me its unbelievably mean and terribly beautiful face. But one thing it was and is certainly not: horrible."