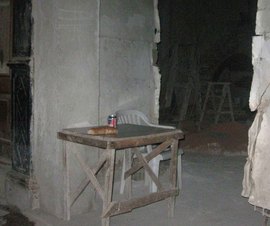 The Ghost of Power Cuts Past has returned across my country. The inconvenient blackouts so common in the nineties have returned because of the international crisis and the dysfunctional Cuban economy. We'd come to believe they were ancient history, overcome by the so called Energy Revolution driven -- five years ago -- by Fidel Castro himself.

In a frenzy to reform electrical generation on the Island, millions of incandescent bulbs were exchanged for energy-savers and thousands of electricity generators were installed throughout the Island. The old Soviet air conditioners were replaced by more modern Chinese ones and the hardy refrigerators from the forties were turned into scrap. Along with these electricity-saving approaches, a stable supply of oil -- coming from Venezuela at a very low price -- helped to eliminate the annoying cuts in electricity. Our leaders pledged in front of cameras and on national television that only a hurricane or an accident could once again plunge us into darkness.

Now the moment has come to trim the illusions but not, this time, because of the high price of fuel in international markets. Paradoxically, the problem has come because of a fall in the value of oil and its derivatives. Cuba can no longer resell a portion of the barrels that come from Caracas and this -- along with the international financial problems -- has forced it to re-impose the cuts. At the same time, a good portion of the state enterprises spend more than they produce, putting pressure on them to become more efficient or shut down. Those who will feel it the most, however, will be the residential sector, which will return to candles and rechargeable lamps for lighting. These days my compatriots are purchasing -- compulsively -- lots of flashlights and batteries.