The sea of unisex orange scrubs in the jury box was overwhelming. I scanned the makeup-free faces, tight pigtailed braids and bed heads, the one in the third row, fourth seat resembled the man I had last seen five months earlier conquering an outdoor ropes course on his 22nd birthday. His long hair had been replaced by a crew-cut and his closely wrapped waist chains accentuated drastic weight loss. That inmate, a felon who had been convicted of a heroin overdose a year earlier, a prisoner who was awaiting sentencing for possessing drugs while on probation, and my first born.

I listened intently to his Public Defender and wondered how it felt to represent strangers. She spoke with an aura of urgency that was difficult to reconcile against the softness of her blue eyes. "Your son could be receiving as many as 22 years but he has been given the gift of drug court." It was like the scene from Poltergeist when the mother enters a portal tethered by a rope to save her child from the beast. I was also dropped into an unfamiliar world to help my child. "Stay away from the light" emphasized the state of confusion as she frantically attempts to find their way back home. When a benevolent lawyer interjected, "Opiate addicts don't make it through the rigors of drug court, and they end up in prison" the movie mom and I were both required to make potentially deadly decisions in hyper speed however, my experience was not a Stephen Spielberg production.

Instinctually I felt it was a mistake to accept a gift that was obviously the wrong fit for my son. The last few years of his life had been marked by achievements during recovery; like him earning his car privileges and exceeding the sales quota at a new job. When his disease was more powerful than his fragile new skill, there were relapses. Fortunately he would persevere and continue learning. As a participant of drug court he would be required to master both the typical and unique challenges of being a four-time felon, without local residence, family, nor employment. He would have to follow every detail of the program for 18 months or be resentenced to extensive prison time.

It was magical thinking to believe that my slight nod and tense smile projected confidence when I caught his eye in the courtroom. I wished for the power to erase the stark, beige walls and the industrial clock from our lives even for a moment. I longed to hug him like after his football games when he'd put his chin on the top of my head and squeeze me so tightly that I couldn't catch my breath. If I had the opportunity, this time I wouldn't push him away.

The inmate's names were called to reveal the darkest snippets of their lives. They approached the podium cautiously, impeded by their leg chains and loose plastic sandals. The common thread between them was a hatred for their accomplices, heroin and meth. Several young women in the jury box began weeping as the judge finalized a 12 year flat sentence for the only discernible adult, a grandmother whose crime put her family at risk. A child-like woman bent sideways, struggling to use the hem of her orange shirt as makeshift tissue but the limits of her waist chains made it impossible to reach her face. The grandmother thanked the judge and prayed out loud that incarceration would alleviate her guilt. She spontaneously turned and addressed the jury box in a jagged voice. "You young people, look at what my life has become, stop doing drugs or you will never be free". I bowed my head in reverence for this woman losing more than a decade of her life. The silence in the room except sniffs and whimpers made my stomachache. 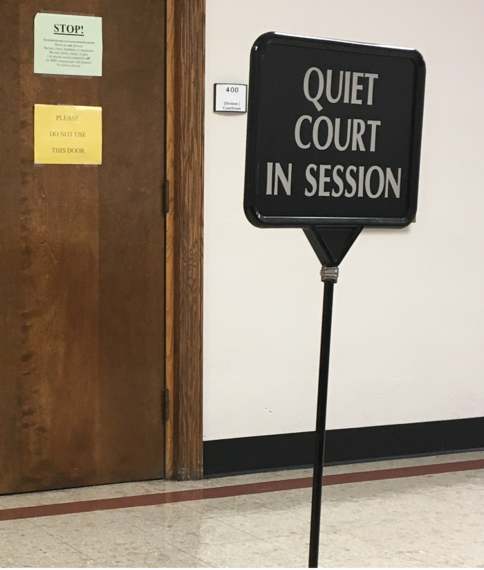 At the lunch break my angel-lawyer reengaged and emphasized "Waive time and request to transfer his probation to your home state". Although I wanted to be optimistic his solution seemed both complex and unlikely, the Public Defender had been in constant motion, supporting multiple inmates in two courtrooms the entire day.

She was jugging folders at the copy machine but agreed to listen while working. "My son," I began, but immediately lost my composure, "...will die if he stays in Arizona". The grief in my voice caused her to pause, she looked me in the eye and for a split second her understanding was palpable. My relief faded as she quickly turned away and cautiously agreed to pursue the approach.

I was praying for my son to be granted access to a path that would substantially increase his chances for success when a small group of male prisoners shuffled by. I unconsciously put my hand to my lips and blew my son a kiss. The shout from the plain clothes officer reverberated across the hallway and startled everyone, "You can't talk to him. You won't be allowed in the courtroom and he will be in trouble."

My experience in Early Disposition Court was an awakening. I learned that outcomes for addicts were standardized and an assignment to be "screened for drug court" was the only alternative to prison, however necessarily the best solution. I realized that instinct and good luck were not enough to be an effective advocate for my son. I exited the courthouse grateful for the sunshine and fresh air on my face, but a nagging feeling of discontentment prevailed. Would my son ever be free from the beast and return home alive?