Holiday season or not, snippets of the devastation in Syria flash across our TVs. It's way too complicated to wrap our minds around and far too tragic to watch, so some of us continue to shop and make plans for our celebrations and try to ignore them.

PHOTO GALLERY
This Holiday Season, Give to Aleppo

But whether we turn off our TVs or not, the brutal dictator Assad - a man who should be tried and hung by the United Nations for his multitude of human rights violations - continues to kill his own people rather than use a modicum of intelligence and military strategy to fight the rebels. There are countless others to blame too, rebels who, rather than choosing peace, continue to wreak havoc across the entire Middle East; Iran and Russia, evil powers who have self-interestedly chosen war over diplomacy; and governments in the West who are quick to express outrage but do nothing to intervene.

These are people, not pixels on our TV screens, and so many of them are children. Recently, some friends and I sponsored a Syrian family to immigrate to Canada. Their apartment in Damascus had been blown up, and they were living in Istanbul while they waited for LifeLine Canada to help them move to Toronto. The family knows several more back home who still need help. He shared this desperate plea with us from his friend Yassen, of the Abu Saeed family who are caring for 28 children in Ghota, the besieged area near Damascus. At the risk of spoiling your holiday mood, I am sharing it with you.

"This family was an example of love and intimacy till this Black 4th September 2012 of this horrible war was came, three of my brothers were killed Said, Samer and Bilal. They were executed by the regime without mercy, they have never been affiliated to one of the warring parties or any political organization. Each of them has large families. The first has six children, the second has four and the third has three children.

After three months the siege began, which prevented the entry of food. There was no food or water. Children cried all time and could not sleep because of hunger. The food was very expensive because it was so rare, so we spent all our saved money within one month in order to feed the 28 boys and girls in the family, all weak from hunger and illness.

Malnutrition is getting more severe and some children like Hajer who was in her third year of school is now unable to walk and her weight approximately 4 kg. The children haven't been to school in four years. Before, my Mom used to cook a big meal for all the family, now no food could be delivered to us, and if delivered we cannot pay for the high price these days, we are human beings under siege. Fighting has intensified over and over, and the long-suffering people are bearing the brunt of the devastation.

Now, the war is approaching its sixth brutal year. The bloodshed continues. The suffering deepens and the situation is still getting worse, without income and with these large expenses, which relies donations and borrowing from friends outside the country.

I do not know if still we have hope? At least we did not die yet.

So this holiday season, instead of filling just your family's stockings and piling up the boxes under your tree, this year make a donation to fill up your heart. Here are three fine organizations that you can give to that are providing desperately-needed aid in Syria: the Syrian American Medical Society, a non-political, non-profit medical relief organization that is working on the front lines of the crisis; The White Helmets, ordinary Syrians who banded together in 2013 to save lives; and Molhamteam, Syrian humanitarian volunteers who took their name from Molham Traifi, a former prisoner of the Assad regime who worked tirelessly to help besieged civilians until he was killed in an attack on the city of Salma in 2012. If you're interested in helping Yassen's family directly, please email me at rana@creativeclass.com.

The Gift of Giving - Help Aleppo
This Holiday Season, Give to Aleppo 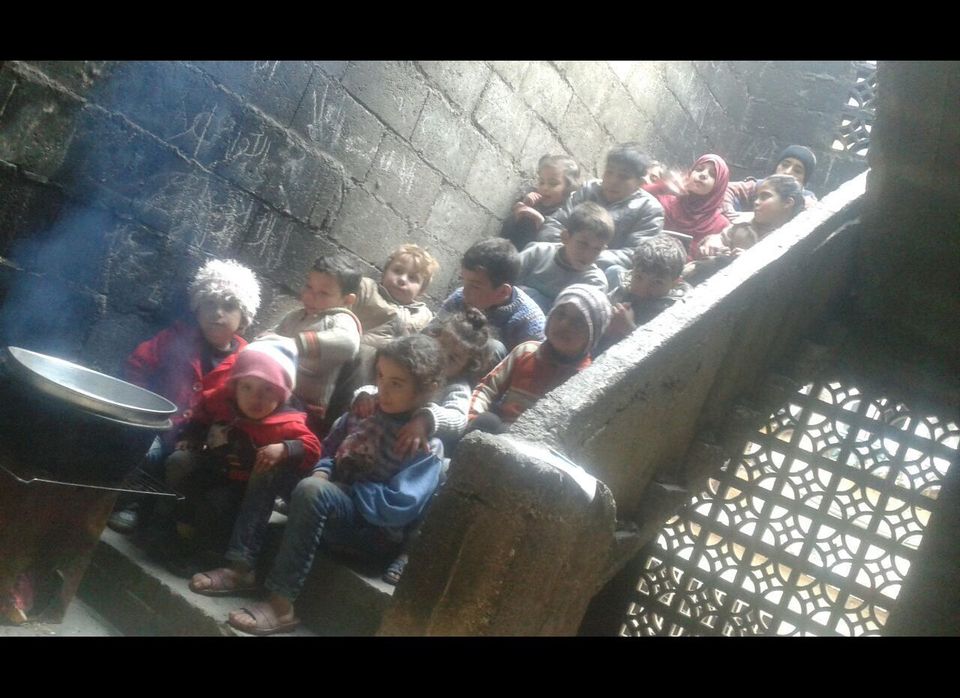