We human beings have a remarkable ability to focus on the negative. Over the past one hundred years the average U.S. life expectancy has increased by 52 percent. Infant mortality has decreased by 92 percent. Real per-person income has increased by 420 percent. And there's now more computing power in a single mobile phone than the entire country used to have.

The United States has become a country where we drive to our protests.

The reality is that we live in one of the most advanced, abundant, and peaceful times in history. Yet many people are miserable. As Louis C.K. says, "Everything's amazing but nobody's happy."

Where you focus is where you go. Given half a chance, the voice of "Hell No!" can easily take over the show.

As strange as it may sound, a big part of the problem is that we no longer have that many things to be genuinely frightened of in our life. It's becoming ever harder for the voice of fear to do its real job, and so it tends to create unproductive "make-work" instead. Having no real and present dangers to respond to, it obsesses over little, niggly, or even imaginary issues.

The voice of fear is anchored in our reptilian brain. It's a hardwired response that's evolved over millions of years, and it has the capacity to provide us with intense bursts of energy.

Living in the wild, an animal will see a predator, go into fight or flight mode, escape the danger and then rest. When we're responding to real and present dangers, such as a speeding car or a mountain lion, the voice of fear turns on, gives the body extra energy to get through the crisis, and then turns off.

However, there just aren't that many real Tigers for us to face anymore. Instead, we create endless little things to worry about. "Were we overcharged for our car repairs?" "Am I answering enough of my emails?" "Are the kids eating enough greens?" "Do I look fat in this outfit?"

Without those occasional big Tigers to deal with, we seem to come up with a million mirages to get alarmed about instead. And since these fears are primarily self-generated, there's nothing we can do "out there" to make them go away. We can never run fast enough to get off this particular treadmill.

In contrast, gratitude serves us well. It's both a gift and a practice. And along with growth and service, it's one of the most effective tools for making the shift to a higher level of consciousness, from scarcity to abundance.

When faced with a choice between love and fear, between acceptance and judgment, or between gratitude and anxiety - choose up. 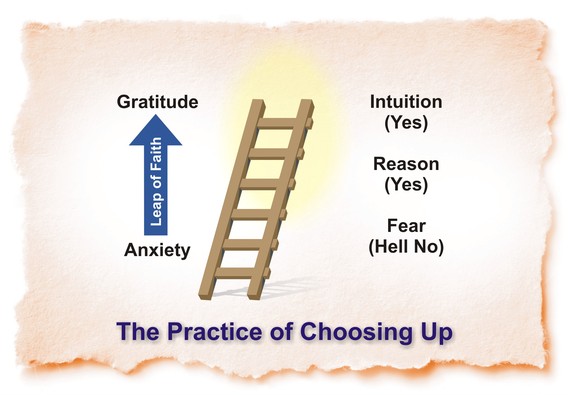 This may sound simple, or even trivial - far from it. It takes strength to face your fears and redirect your energies. It takes acceptance to listen to negativity without either feeding it or fighting it, without making it right or making it wrong. And it takes faith to reach for the light when you feel surrounded by darkness.

Gratitude is foreign to the voice of fear. It's a program that doesn't compute. "If I stop being afraid, then I won't have any power." "If I'm grateful, then I'll stop growing. "If I focus on the positive, then I'm being irresponsible." "If I let go of my fear, then I won't be able to make a difference."

From a place of abundance, these statements sound ridiculous. It's just obvious that wallowing in negativity makes everything worse. But when you're in a place of scarcity, fearful thoughts sound like truth. To the voice of fear, only fear makes sense.

Leilanna is our joy baby. She has so much enthusiasm for life that she can barely contain it. Literally. When she was eight months old, she'd sometimes start laughing so hard that she'd lose muscle control and start thrashing around on the couch. While giggling. It was like a joy seizure.

In contrast, my email inbox seems like a perpetual war that I keep losing. This stresses me out. It triggers my fears of failure, unworthiness, and more. It's like all those emails are just sitting there, taunting me, telling me that I should have responded to them days ago. When this happens, my default response is to push harder - to focus on the negative, increase my stress, and try to use this to amp up and plow through them all. Yet this rarely works.

Thankfully, I've got a joy baby in the house who reminds me of how silly my fears can be. So I'm learning to breathe, acknowledge my fears, and just be with them. Then as they start to release, I shift my focus to the many, many things I have to be grateful for.

And suddenly, that overfull inbox just doesn't upset me the way it did before.

I invite you to turn this into a practice: love your fears, focus on the positive, take a leap, connect to some of the many things you have to be grateful for - and watch how your life changes as you do.

This article was created as an excerpt from Yes Yes Hell No! The Little Book for Making Big Decisions. To eliminate your insecurities, transform your fears, and develop total trust in your ability to make big decisions, purchase the book on Amazon or download the first five chapters for free.

More:
healthy livinggraceConsciousnessgratitudespirituality
Newsletter Sign Up
The essential guide to taking care of your mind and body
Subscribe to HuffPost’s wellness email
Successfully Subscribed!
Wellness delivered to your inbox