Hoo, boy. When Dana Perino took back the press room podium from Health and Human Services Secretary Michael Leavitt this afternoon, she sure imagined herself to be cock of the walk! 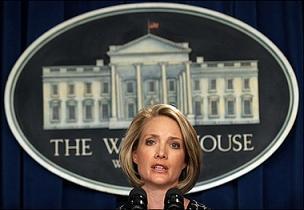 Addressing the issue of the Water Resources Bill veto override, Perino was full of snippy vinegar. "We've anticipated the override and we expected it, and the President is fine with being overridden on this bill," she huffed, and she spoke with spry dismissal of the Democrats: "We'll see about that... I don't know if I would be proud, as a member of Congress, to be overriding the President in spending... Well, that's rich coming from the Democrats..." Her overall depiction of the President (which depended heavily, of course, on one's willingness to suspend your awareness of his own profligate spending) was one of power and swagger:

I will tell you that this President, who held the line with budgets in the first administration -- and yes, he has increased the number of veto threats that he's put out since the Democrats have been in office and in the majority, but that's because they wanted to add new spending, new taxes, and fiscally irresponsible ways of paying for new programs that the President doesn't think is the right direction for this country. And that is why he has vetoed the bill. Anyone who thinks the President won't veto those bills I think has been proven wrong.

Unfortunately for Perino, the next question had to do with Pakistan. And that's where she went right off the rails:

Q Why is the President dodging a personal phone call to Musharraf?

MS. PERINO: The President has had his Secretary of State --

Q I'm asking you directly why doesn't he call him?

MS. PERINO: The President feels very strongly that President Musharraf knows exactly how he feels about the situation.

Q That isn't the point.

MS. PERINO: It is the point.

Ahh, she wishes that was the point, because it didn't take long for someone to ask the $64,000 Question:

Q Can you concede that the U.S. doesn't have the leverage that it once did over Pakistan? And perhaps the reason the President isn't picking up the phone is because it's easier to point out that Musharraf turns his back on Secretary Rice than it is to point out that he turns away from the advice --

MS. PERINO: No, the President feels strongly that he and Musharraf have had a good relationship in the past. They have worked well together to help prevent terrorists, as well as the President has helped him on the way to establishing a free and fair Pakistan, one that is democratic.

The United States is certainly a powerful country, and the President feels very confident that his feelings are well known by the Pakistanis, especially President Musharraf.

Wow. Perino, to her credit, stopped that question just in time. But it says a lot that minutes after spinning a veto override as some sort of evidence of Bush's potency, Perino has to stop and pleadingly remind us that "the United States is certainly a powerful country!"

Hey, the news isn't all bad! Bush got Mukasey through, after all. Of course, he had Chuck Schumer and Dianne Feinstein to thank for that.

So, in a final analysis, let the record show that today wasn't a very good day for presidential power.