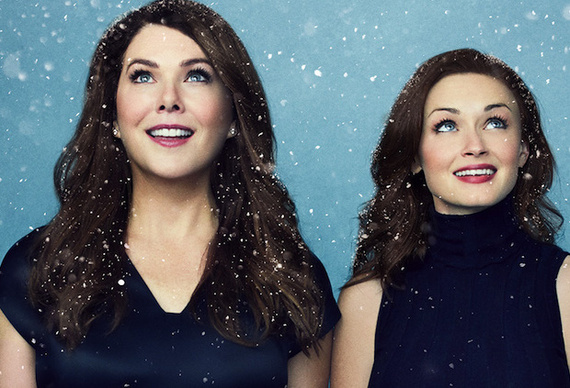 This review was originally published at Wear Your Voice Magazine.

*Oy with the spoilers already!*

Haley Mlotek of The New York Times coined the phrase "emotional speculative fiction" to talk about Gilmore Girls, and that is still the best description of the show to date. As someone who doesn't have a hometown, Stars Hollow has always offered me a special kind of comfort in imagining what it would be like to live and grow up in one place.

Even though I was born an American citizen, I've always been an interloper in America; my biracial appearance has always coded me as "other" in spite of all the linguistic and cultural work I've done to perform my right to belong here. I often find myself judging other Americans on whether they've seen American classics like The Graduate or read Hemingway. (In this, yes, I am Rory Gilmore.) I've been forced to relate to stories on an emotional level for as long as I can remember, even if the characters look or are nothing like me. I had no other choice.

While the Gilmore Girls' diversity and inclusiveness problem persists -- there are very few people of color on the show, and they are often presented as caricatures, like the indomitable Tiger Mom Mrs. Kim and Emily's new Hispanic maid, Berta -- I'm not going to focus on that. This year has been one of the ugliest ever, and what little magic is left, I am fighting to hold dear. So yeah, it's really weird that Mr. Kim finally makes his first brief appearance (um, WTF?), that Lane's and Jess's arcs are vastly underdeveloped, and why don't we meet Michel's husband? These and others are issues I hope some other cultural commentator will tackle, so hopefully in the next Year in the Life, these problems won't distract from the pure wonder that is the town of Stars Hollow and its denizens.

Charming Stars Hollow, the living snow globe of a town that has enchanted us for years as Lorelei and Rory Gilmore's story has unfolded, is not all quirky town meetings and gazebo festivals in the new Netflix revival of the show Gilmore Girls: A Year in the Life. A far more down-to-earth Lorelei finds herself in a rut with her Dragonfly Inn sans Sookie, as well as at an emotional standstill in her relationship with Luke. Rory is out of work and floundering -- even after some major writing success -- and entangled in an affair with an engaged ex-boyfriend. And their mom/grandmother, Emily, is devastated after the death of her husband of 50 years, made all the more poignant by the actual passing of the actor who played him, Edward Hermann, in 2015.

It's not just the Gilmore women. Virtually everyone in town is going through something uncomfortable -- from Lane's domesticity and Zach's unhappiness with his soul-crushing day job to a grey-haired Kirk who still hasn't managed to get a semblance of an adult life together. Michel's husband, Frederick, has suddenly decided he wants children, and Michel wants nothing more than to make him happy in spite of the fact that he despises kids and never wanted them. Paris and Doyle are in the middle of an ugly divorce, although Paris is at the top of her game professionally, owning the best fertility and surrogacy clinic in the western hemisphere.

Stars Hollow Mayor Taylor Doose has initiated a campaign to install sewers in Stars Hollow, offering us viewers several choice anecdotes about crappy mishaps -- the perfect metaphor for how different a place this updated Stars Hollow feels than the one we said goodbye to in 2007. Shit has gotten real.

I was surprised at the generally melancholic tone of each episode. The brief moments of levity weren't quite enough to pull us into that happy-happy-joy-joy Stars Hollow of the television series. There was something simultaneously sacrilegious yet appropriate about how all these quirky characters -- whose struggles used to be comedic plot points -- get dark moments of self-reflection, frustration and even depression because their lives haven't ended up where they hoped. For once, we could actually relate with the characters' difficulties, instead of escaping into their fantasy world of snappy dialogue problem-solving.

Lorelei's initial grief over her father's death focuses on all the times her father neglected and abandoned her, and it takes her a good part of Year in the Life to remember there were things she loved about him, things they did together that made her happy and finally come to some peace with his passing and all those things that went wrong between them. Richard's sudden death also spurred Lorelei into reflecting on her relationship with Luke, which was in a limbo of their own making. And it also helps her realize that her own career dreams have been too small, and what steps she needs to take to grow her own empire. Richard would be so proud.

Emily Gilmore's arc over the year is one of the best things I've ever seen on television, and I hope Kelly Bishop gets nominated for her work in it. Watching her go from an uptight WASP matriarch to the woman who lets her maid's entire family live in her home without complaint, and who gives the most stunning tongue-lashing to those snooty broads at the Daughters of the American Revolution, was outright cheer-worthy. Never in all my life would I imagine Emily even thinking a swear word, and to hear her say several mouthfuls was absolutely glorious. Richard would have first been shocked by her incredible about-face, and then I think he would have thrown his bow tie into the fireplace and joined her. #BULLSHIT

It was heartwrenching to see that Rory hadn't grown much in the years since we last saw her, and her special snowflake-ness is no longer a boon -- it's the thing keeping her from really going for her dreams. It's easy being a big fish in a small Stars Hollow; quite another to be a big fish out in the world with much bigger, faster and more talented fish who are way hungrier than you are. And the fact that she's once again entangled with an ex-boyfriend who is engaged to someone else was pretty much UGH.

Then again, there are a lot of people Rory's age who are going through exactly the same thing. They can't find jobs in their chosen fields because there are no jobs or the jobs don't pay like they used to, dating is complicated and there's a general sense of floundering that even older 30-somethings like myself can relate to.

All Luke ever wanted was to be with Lorelei, and it was dispiriting to see how just wanting someone for so long and so profoundly isn't going to be enough to keep the relationship on an even keel. Also, it turns out Luke broached the subject of having a child with Lorelei in such an obtuse way that Lorelei didn't even realize that's what he wanted. Now it's too late for her -- and, ultimately, both of them, as their surrogacy research takes an awkward turn. "Nobody gets to have everything they wanted in life. All in all I did pretty good," he says, sounding so defeated.

In spite of painful realities bleeding into the world of Stars Hollow, these were 12 of the best hours I've had this year.

For people like me in America right now, this is a terrifying time. We are scared for our lives, we are scared for our futures in this country. And legitimately so. Nobody knows what will happen. Nobody knows how bad things will get. But if history is our teacher, the direction we're going ends in concentration camps. I didn't know how badly I needed this new iteration of Gilmore Girls for some solace and some laughter through the tears. It's the most real the show has ever been--our imperfect world has bled into theirs. Where in the past it comforted me to escape into the Gilmore's world and the Stars Hollow community, this time it comforted me to know that things are messed up everywhere.