It's no longer a man's world. Here are just some of the inspiring women forging a career for themselves as guides and rangers in the African bush. 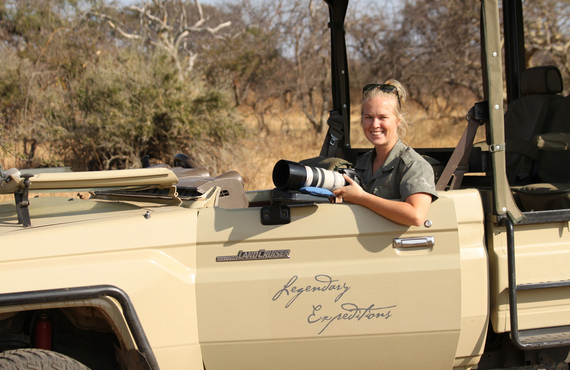 When Jennifer Denton started applying for guiding jobs after completing her Anthropology and Environmental Science degree, the response wasn't entirely positive: "I got a lot of doubtful responses, especially from older men, stating that guiding wasn't a job for women and warning me that I was entering a man's world," Jen recalls. "Some even went so far as to tell me I would not be doing it for very long and should start thinking of other things to do with my life.

"Luckily I am a 'I'll prove you wrong' kind of girl and this is what I strive to do: show the world that I can follow my passion and as difficult as it is, I can break into 'a man's world' - and not only do this, but succeed at it too."

Fast-forward a year or so and 23-year-old Jen has done just this: she currently works at Mwiba Lodge in Tanzania as their Guide Trainer and Anthropologist.

"I do think that the safari industry is becoming more receptive to women guides. However, I think that you still have to work really hard for it; you have to prove yourself and earn respect from your male counterparts," Jen says.

"I find that worldwide, in all industries, women are now being given the opportunity to pursue their passions as careers", she continues. "I am so grateful that I was able to get into the safari industry at a time that there is a growing female community of guides, and I encourage any women not to be discouraged, but to throw themselves into their passions and say: 'I'll prove you wrong'. Your work is your life, so why spend your life doing something not worth living for?"

Jen - profiled below - is not the only woman breaking stereotypes in Africa. Here are some of the other women making tracks as guides and rangers in Africa. 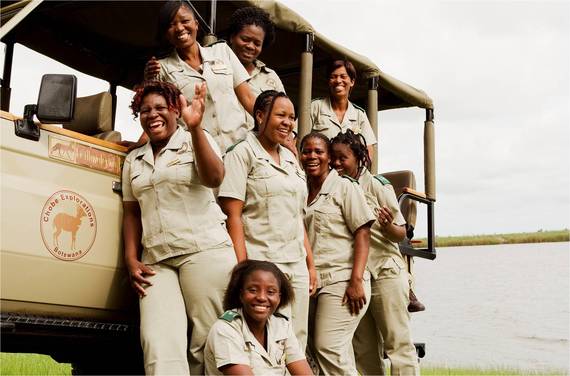 Back in 2005 - a mere ten years ago - there were less than 10 female safari guides in all of Botswana. Today, however, there are 14 that make up the guide team at Chobe Game Lodge - the first all-female guiding team in Africa.

The 'Chobe Angels', as they're known, were recruited after the lodge realised that female guides seemed to be more in tune with their guests' requirements, as well as being more careful drivers than their male counterparts. They found that having female drivers meant that 'vehicle maintenance costs went down by about a third over a five-year period, fuel consumption dropped and [there were] less carbon emissions.'

70% of their guides were trained at Chobe Game Lodge and there is an emphasis on constant training with twice yearly refresher courses.

'Chobe Game Lodge wanted to set an example for the industry and achieve what everyone, including most of the staff at the lodge, thought impossible,' the lodge stated last year in regards to their all-female team of guides.

The lodge says that they have set a precedent for the industry to 'break out of the mould and provide equal opportunity.' You certainly can't argue with the figures: there is now at least three times the amount of female guides in Botswana as there was in 2005. 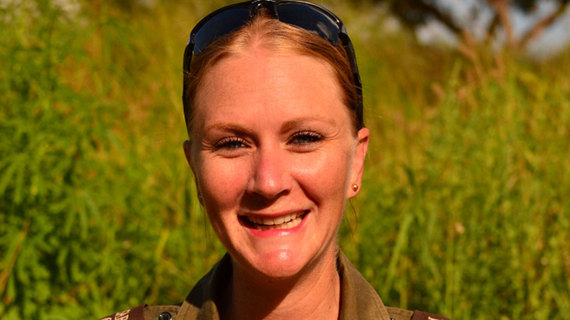 When Sabi Sabi invited the Michelin-starred chef Eric Chavot to guest chef at Earth Lodge, they probably didn't expect him to become quite so attached to his guide, the Assistant Head Ranger at Earth Lodge, Michell Steinberg. He now refuses to be guided by anyone else. Of Michell, Chavot said:

Michell was an adventure guide before training at the reserve. She has a National Diploma in Adventure Tourism Management, an FGASA level two, and also a back-up trails guide qualification.

Sabi Sabi says that 'anyone - regardless of gender, colour or creed - is welcome to apply to become a field guide'. The private game reserve was the first to employ a female guide within the initial ten years of its founding, and Michell is one of four female guides currently working at Sabi Sabi. 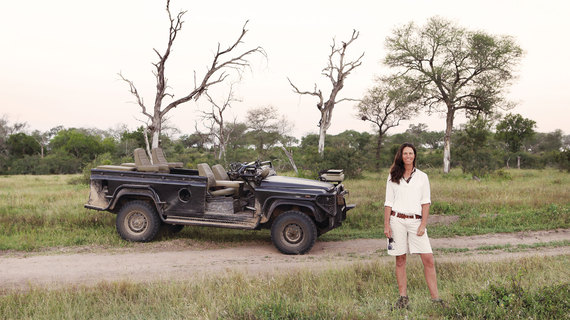 Kate Imrie is the Head Ranger at Londolozi and is also in charge of training guides. She has been guiding for over ten years and lives at Londolozi with her husband and two children.

Kate says that even though the environment at Londolozi made it easy for her to fit in, it's the physical challenges that can often make guiding tough for women - not to mention being judged for their driving.

Despite that, Kate's advice to young women thinking about starting a career as a guide is: "take the risk." She also advises that they choose somewhere with a "strong, positive culture", such as she found at Londolozi. 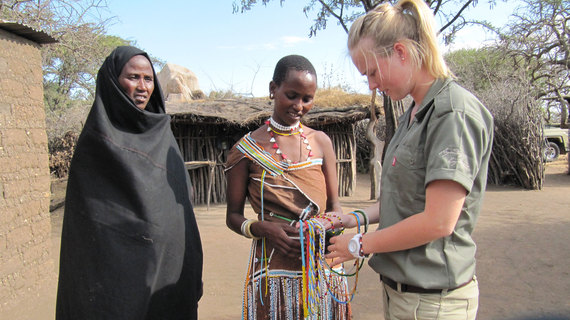 Jen Denton admits that as a blonde 23-year-old, she's not what guests expect of a guide trainer. However, when Jacada Travel's Tess met Jen - who is also the lodge's anthropologist - at Mwiba Lodge in 2014, she was blown away by her enthusiasm and knowledge:

"She really impressed me! Jen is on another level with her enthusiasm and understanding of local cultures - she was in her element when chatting to the elder of the Datooga tribe."

Jen didn't originally plan to become a guide, but started training as a 'safety net' after graduating with no idea of what she wanted to do with her career. "Within a day or two I was hooked and realised that this was something I could do where it involved working with people from all over the world, local peoples, and of course, our amazing African wildlife."

She admits there are some challenges, including tasks like cutting down trees, fighting off elephants, getting vehicles unstuck, but also "proving to guests that they will survive with a female guide instead of a hunky, rugged male fresh out of the African bush."

The positives are evident, too: "I find that as a female guide, guests tend to be more open and interactive, as possibly they feel less intimidated," she says, echoing the findings of Chobe Game Lodge.

"Female guides tend to focus on the finer, delicate details and the prettier things in the bush: the wildflowers, the baby birds in the nest, the little dik-dik that they want to take home as a pet, and not always the more obvious animals. I find that I am able to open guests' eyes to the interesting facts about the lives of the less obvious smaller animals, as opposed to [just] the big and dangerous." 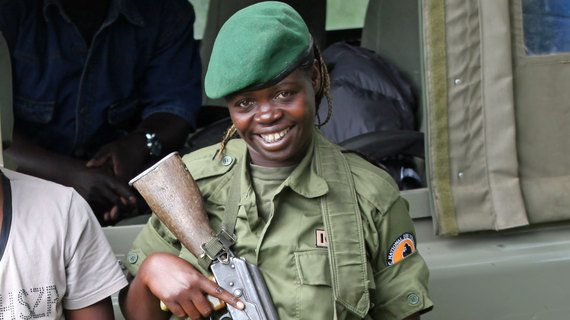 It seems an unlikely country to be featured in an article about equal opportunities, but 27-year-old Francine Bwizabule Muhimuzi is proof that the situation in the oldest national park in Africa, Virunga, is increasingly positive.

Francine is a ranger in Virunga National Park and one of the first women to complete the brutal training course; run by former Belgian commandos, both women and men follow the same programme. The training needs to be tough: over 150 rangers have died protecting the land from armed poachers and rebels from the nearby conflict zones.

Some of the benefits afforded by working in such dangerous conditions are above-average pay (the rangers are paid twice the amount the government allocates the park, due to support from donors); their long hours are balanced with formalised holidays; and the park even includes maternity leave in the female rangers' contracts.

Byron Thomas, Jacada Travel's Head of Africa, was paired with Francine on his trip to DRC at the end of 2014:

"After crossing the border into Goma - one of the more interesting cities I have visited in Africa - I felt immediately secure when I picked up Francine at the ICCN office. She looked after me so attentively, getting out of the car each time I did, for instance. While her second language is French, she was determined to learn English and, with her beaming smile, I was immediately enamoured. The DRC is quite a place, and Francine added a professionalism that more than surpassed my expectations of the destination."

There are currently 14 female rangers working in Virunga National Park, an uplifting sign in a country in which equality is far from the norm.