There's plenty of talk about the need to support women in tech, and in particular math and science education for girls as they move from middle school into junior high.

But for at least one high profile woman in technology -- there's a reasonable argument to be made that education should be 'blind' to gender.

To understand where this comes from, you have to hear her story.

Last week at the 92nd Street Y, Marissa Mayer kept a packed house glued to the story of how a young girl growing up in Wisconsin could be essentially a 'geek' while at the same time being on the dance squad.

Mayer grew up in Wausau Wisconsin, a city of 40,000 about 3 1/2 hours northwest of Milwaukee. She was one of the top debaters at Wausau West High School. But she joined the dance squad as well -- a geeky teenager who wanted to show that cheerleaders could be smart.

But Mayer is quick to point out that all through high school, her achievements were never characterized as 'good for a girl.' In fact, she is quite sure that being treated as a student, even a very smart student, rather than as the unusual girl who's good at math and science, was critical in her success.

She went from Wausau to Stanford University, thinking that her future was in medicine. But after returning home for a break, she compared her chem and bio class work with her peers, and realized she wasn't getting anything different than they were in various pre-med programs. She went back to Stanford looking for something unique, where she could excel and get an extraordinary education. She found herself drawn to Symbolic Systems -- and ended up getting both her B.S. and M.S. in Computer Science from Stanford University, specializing in artificial intelligence.

If being a girl in CS at Stanford was hard, Mayer says she didn't really remember. In fact, it wasn't until she read the student newspaper one day, that it became clear that others DID notice her for more than her brains. 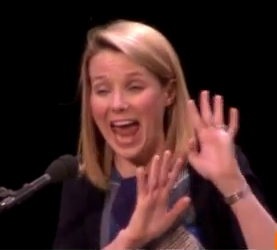 "There was this columnist at The Stanford Daily that I really liked. One day she wrote this column about campus icons, meaning people you recognize but you don't know their name, like the crazy guy in the plaza who yells at you when you bike past him. So she had this list, and I was reading through her column and kind of chuckling to myself about these people, and then there was someone on the list that was 'the blonde woman in the upper-level division computer science classes.' And I was like, 'Who is that?' And then I'm like, "Oh, it's me!" so I guess I realized at that point that I was somewhat unusual."

So, for Mayer -- looking at the world without the filter of gender was an important part of her excelling on her own terms. She says it may be better not to ask the question: is this student a girl or a boy.

"Asking the question, I worry, sometimes can handicap progress," she said. "I lived in a bubble. I was really good at chemistry and biology [growing up]. No one ever said, 'Wow, you're really good at this for a girl."

"If I felt more self-conscious about being a woman it would have stifled me more."

That said, Mayer is clearly proud of the fact that Google has more female engineers than many of the companies in the Valley. More than 20% at this point. But she's clearly not hiring based on a quota or a goal. At Google, she just wants the very smartest people who are willing to work very very hard.