I was married, for the first time, in a strip mall on a sunny Friday morning in late October, 1999. I was not quite 21, and all the world was still unknown to me, wonderful and inviting. I did not care that there were murmurs of discontent among the guests. I did not care that I knew nothing about marriage. Does anyone, ever, know what marriage is until they experience it?

It made sense to us, my boyfriend and I, as we had lain in our apartment together in early October. Why not? We should do this. A few telephone calls, a short drive to the chapel, which was nestled near a flower shop and a Subway restaurant. I had a turkey sub, we paid extra for the photography deluxe package. It was all arranged.

Nine days later, as I walked down the aisle of that little chapel, the eyes of the oddly assembled guests shifted to my mid-section. Unasked questions floated in with the vows and parental discontent. She's only 20, why now? Is she pregnant?

Until 10 months later, when I was.

And that is where the story of my marriage begins: its ending.

Or maybe it was over before it began?

I drove by the strip mall the other night with my teenager in the front seat of my mini-van. The wedding chapel was gone; there's a yoga studio now. A Starbucks. A store that sells cellular telephones. It looks wholly uninteresting and non-descript.

"Your daddy and I were married there..." I told her, pointing.

"There? Where?" My daughter peered out the window, uncertainly.

"In that shopping center. There was a chapel there. But it's long gone now."

That marriage, that husband. That's long gone too, I think.

"You got married in a strip mall?" She seems incredulous and I wonder what she imagined from the pictures she had seen in the photo albums. She sucks in her breath and sounds a little defiant. "That is incredibly lame."

Those photo albums are in the back of the closet now. I was 20 when I married, 33 when I divorced. When the marriage ended after 13 years, I realized how much growing my husband and I had done in the intervening years. And how as we grew up, we had grown far apart.

As I sit at the light near the strip mall, with my teenager beside me, there's a different grown up husband at home waiting for me at home, standing in the kitchen, putting dishes in the dishwasher. A different husband chosen for different reasons, at a different time in life. I drive a minivan and drink red wine, now. My 20-year-old self would throw her head back and laugh at me.

No one, especially not 20-year-old girls, say "I do" with the intention of changing their mind. And before I judge her too harshly, that younger woman, there with the white roses in her hair and that irascible certainty, I have to stand back and admire her just a little.

That girl was something.

Aren't we all something when we are on the edge of the unknown?

My daughter, sitting beside me in her unlaced boots and varsity letter jacket, will never know very much about the girl who married a boy in a shopping mall.

I suddenly wish that this almost-grown daughter of mine COULD know that part of me. I want her to know that I once lived on the edge of things. That I took chances and wore my confidence haughtily. That I understand how it feels to know everything. To need little. To love desperately.

Divorced, after more than a decade of trying to fit a square peg into a round hole, pounding away with hopefulness that if I was just a little stronger, a little more pliable, I would make it work.

She was foolish. But happy, for awhile anyway. Drunk on the curses and the curiosities of being young. That is not something to be ashamed about. I want to tell my daughter that too.

I blink a little as we roll past the shopping center, squinting at the storefronts.

I look at my daughter, flipping through the radio stations. Her face is brightly beautiful in the bluish glow of the dashboard dial. I am caught up in the sheer possibility that is stretching out between us, toward her. Away from me. There's a lot I have to warn her about, I think. But there are so many things I have to let her live to understand, too.

Where is that girl, that I once was, now?

I stare into the rearview mirror of my car as the shopping mall fades and buildings fly by. She's not there, she's not there. Not. There.

And suddenly I catch a glimpse of that girl, in the corner of my eye. And I am terrified and thrilled, all at once.

Because just when I thought that girl was gone forever, that there was nothing of her that remained in my world, I looked over and saw her, just waiting for the world to begin.

Her face was lit up in the dashboard glow.

I held my breath, in fear and wonder, because that girl was sitting right there beside me. 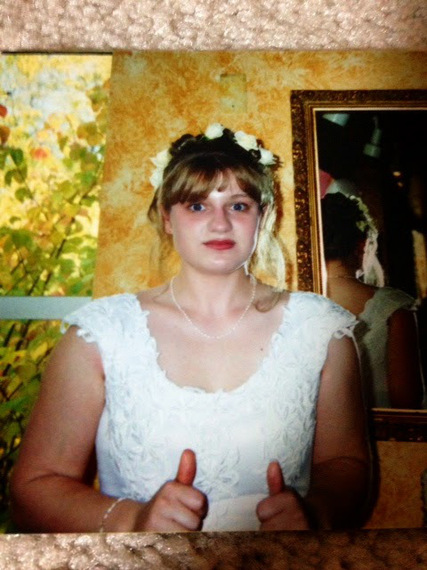