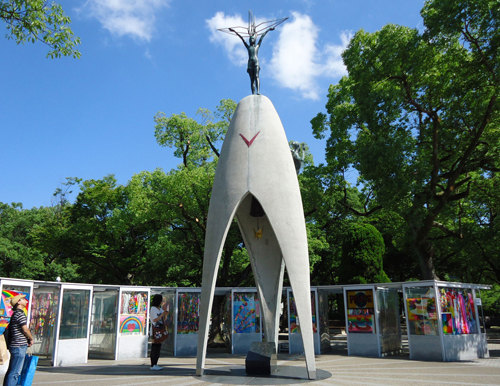 This week marked the 68th anniversary of the surrender of Japan bringing to a close the hostilities of World War Two. But signing the truce didn't stop the death of many who were exposed to massive amounts of radiation during the atomic bombings at Hiroshima and Nagasaki. One victim, a twelve year-old girl, Sadako Sasaki, died of radiation induced leukemia in 1955, ten years after the bomb had fallen near her home in Hiroshima. Her story has inspired millions around the world and her memory transformed the origami crane into an international symbol of peace and hope. 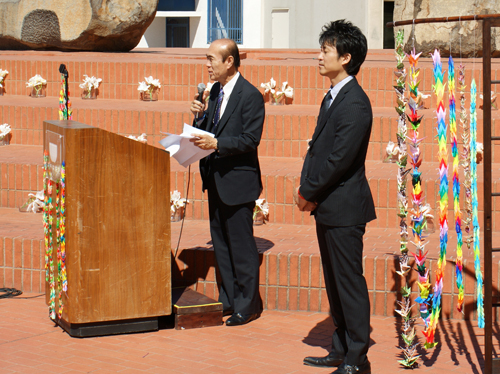 Her brother, Masahiro Sasaki, and his son, Yuji, came to Los Angeles for a special event at the Japanese American Cultural and Community Center (JACCC) on Aug. 6 (the anniversary of the bombing in Hiroshima) honoring her memory and to promote peace and understanding between Japan and the United States.

His goal is to make sure, "that humans never experience that day again," said Masahiro, board chair of Sadako Legacy.

He's guided by what President Kennedy said in a speech to the UN General Assembly in 1961 about the potential for destruction posed by nuclear war, "Mankind must put an end to war--or war will put an end to mankind." 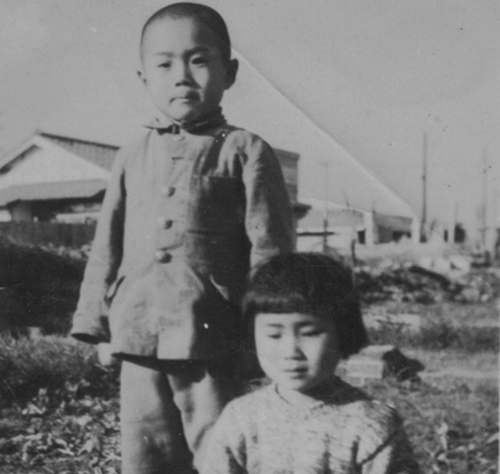 Masahiro was only four years old, and his sister was two, when the bomb was dropped on Hiroshima in the morning of Aug. 6, 1945, its blinding flash, the "Pika" (Japanese for blinding light) followed by the boom, or "Don" (thunderclap) is forever etched in his memory.

He described that morning as we talked over tea with the help of Japanese journalist, Naofumi Okomoto, who'd encouraged them to visit Los Angeles.

Masahiro and his two-year-old sister, Sadako were at home with their mother and grandmother, just over a mile from ground zero. Their father had already left for work. "It was a beautiful morning, blue sky, not a cloud," said Masahiro. His grandmother called them inside saying, "it's time for breakfast."

They never heard an airplane or an air raid warning. Just as they sat down on the tatami mats near the kitchen of their modest, two-story home and started to eat "the blast came in," he said. "We were pushed to the wall," and "I was underneath the table covered by the tatami mats," said Masahiro.

His mother and grandmother were also still inside and appeared to be unhurt but Sadako was missing. She'd been "blown outside the house," and was "sitting on a box in the yard." Her clothes were burned and torn. She was dazed but not injured. "No one understood how she ended up there," he said.

They didn't know what had happened. The blue sky had turned a very dark and forbidding gray and it was suddenly quite hot. His mother and grandmother decided to leave the house and take the children to a nearby river. The bridge there might provide cover from another blast. Along the way they saw the smoke from the many fires that were now burning throughout a city that had been turned into a charred landscape. But it's the human toll he remembers most, especially a woman they walked by who was "holding a dead baby in her arms," he said. "There were people with their skin peeling off and they were totally in shock."

When they reached the riverbank he saw "lots of dead bodies floating by and people jumping in to cool off and dying."

Their grandmother decided to go to back up to the house. The children never saw her again but a few days later their father found her body in the well in front of their home. "Obviously she wanted water badly," said Masahiro.

A heavy, thick rain started to fall and cover them while they waited by the river not knowing where to go or what to do. This was the "black rain" that formed as a mix of irradiated debris from the fires whipped together by the tremendous heat and air currents fueled by these raging firestorms throughout the city. They were all exposed to a massive amount of radiation from this dark, thick and dangerous radioactive water. Breathing or swallowing the water or any food it touched could result in radiation poisoning.

They had "nothing to eat and were almost naked," because their clothes had been burned by the blast, said Masahiro. No one knew what had happened or where to go. After being there for about five hours they saw a friend coming down the river in a boat. He pulled over and they had to decide if they should wait for their grandmother to return. They climbed aboard. "It was a miracle," remembered Masahiro.

They sailed for about four hours and finally found a community shelter. Their father eventually found them and the family was reunited. It would take years for things to begin to return to normal. 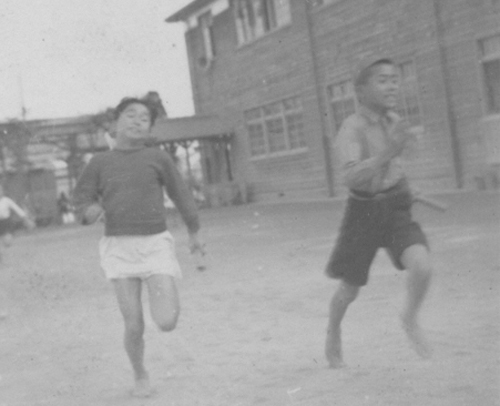 Like so many of their friends, Masahiro and his sister, Sadako, put the horrors of that day behind them. She grew into a vibrant young woman, an outstanding runner who excelled at gymnastics. She was a bit of a "tomboy" with a good nature. She had an active life and dreamed about her future. Of course, her older brother always annoyed her.

They both thought they were fine but in October of 1954, just short of ten years after the bomb exploded, his sister noticed she had swollen lymph nodes and was sent to the doctors at the American run Atomic Bomb Casualty Commission. They diagnosed her as having leukemia brought on by the radiation. 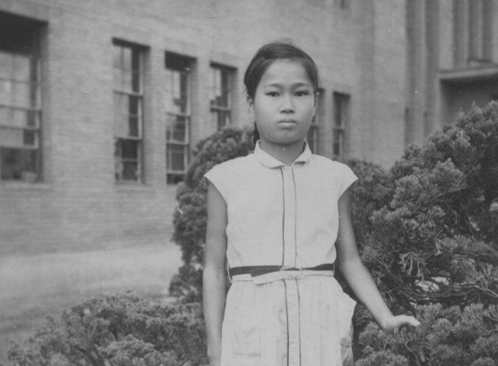 Sadako after being diagnosed, photo courtesy of Sadako Legacy

The disease progressed rapidly. She was confined to the hospital just one month later. Her parents never told her she had leukemia and she never told them that she knew. They all wanted to protect the feelings of each other.

She knew the prognosis wasn't good and she didn't want to die. Her father told her a Japanese legend that said if you folded one thousand paper cranes you would be granted a wish. She began furiously folding cranes.

She made 1,000 and started on a second batch. Her classmates, family and friends pitched in. But unfortunately, she was only able to fold 644 more cranes and died Oct. 25, 1955 -- not quite a year after being diagnosed.

She put up a brave front until the end.

She only cried once. As her symptoms were getting worse and worse, she asked her mother to stay with her overnight. She had never asked her mother to stay in the hospital with her. But her symptoms were getting unbearable and she couldn't eat anything. Her mother held Sadako close to her chest, as one would hold a newborn baby, as she listened to story after story. The next morning her mother had to go to work. Sadako was dragging her pained body, and her legs to the front of the elevator. She knew this was the last time she would see her. She understood the limitation of her life but she told her mother she was fine and to go to work. As the elevator doors closed, Sadako began to cry. She died that day.

Her classmates continued the folding and created 356 more cranes so that she was buried surrounded by 1,000 cranes. 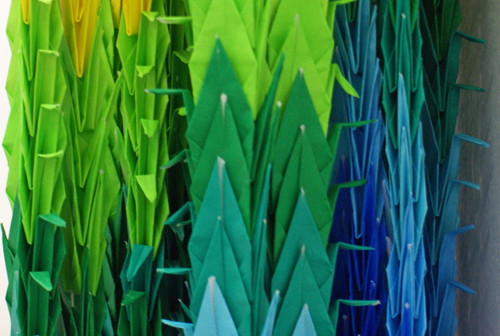 Her story captured the imagination of the country and the world. Today, we immediately recognize the crane as a symbol of peace and hope.

Her friends started to collect money to build a statue in her memory. In 1958, the statue of Sadako holding a golden crane was erected in Hiroshima's Peace Park. A plaque on the statue reads: "This is our cry, this is our prayer, peace in the world."

Masahiro hopes we can learn a lesson from Sadako's short life.

"Her death gave us a big goal. Small peace is so important with compassion and delicacy it will become big like a ripple effect. She showed us how to do it. It is my, and the Sasaki family's responsibility to tell her story to the world. I believe if you don't create a small peace, you can't create a bigger peace. I like to gather those good wishes and good will and spread to the world," said Masahiro.

As part of his "goal" to spread Sadako's message, Masahiro will be presenting one of the last origami cranes she folded to the USS Arizona Memorial on Sept. 21.