One historian suggests she was actually the artist who painted a fifth of the works attributed to Vermeer—his daughter. 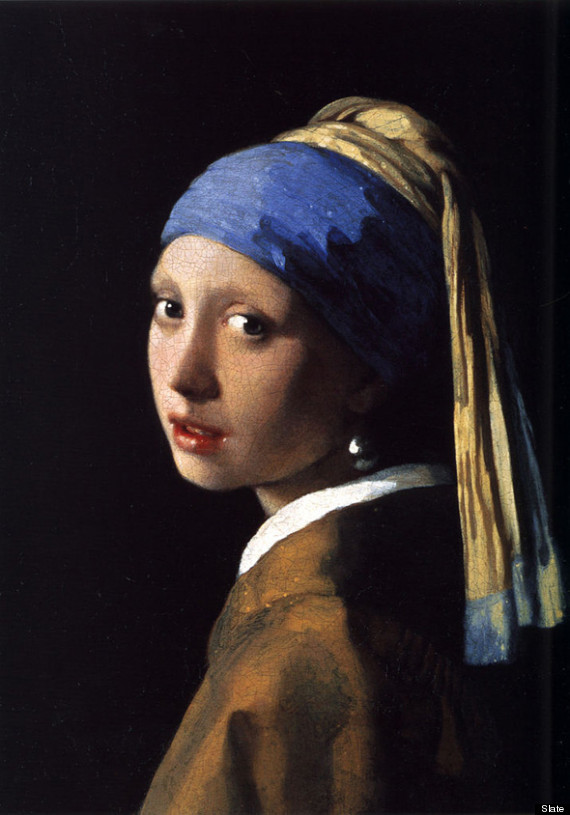 Johannes Vermeer’s iconic Girl With a Pearl Earring has arrived at the Frick Collection in New York, drawing unprecedented crowds. We might therefore ask: Who was she? Several authors, ranging from Marcel Proust’s friend the journalist Jean-Louis Vaudoyer to New Yorker writer Lawrence Weschler, have suggested she might be the artist’s eldest daughter, Maria. Many Vermeer scholars dismiss that notion as a Romantic anachronism, a projection onto an earlier period of a modern view of art as a reflection of the artist’s circumstances. In the wake of this denial, Tracy Chevalier’s novel Girl With a Pearl Earring provided an alternative, fictional answer: She was the family maid’s assistant, Griet (played by Scarlett Johansson in the film), who became Vermeer’s love interest.

But the evidence suggests Vermeer’s daughter Maria was his likely model and a crucial part of his art. More provocatively, I believe that Maria Vermeer was also a gifted artist who painted roughly one-fifth of the works currently assigned to her father.

Vermeer was the greatest of the Dutch genre painters, who took their subject matter from everyday life. Rembrandt had already used himself and other family members as models for historical roles, and such models were even more appropriate for genre scenes. Another factor was the rise of optical naturalism, including the aid of the camera obscura, a forerunner of the modern photographic camera pioneered by Carel Fabritius (also represented at the Frick), Rembrandt’s most gifted student and Vermeer’s primary influence. But Vermeer did not simply “record” the world around him; rather, he carefully crafted poetic constructions based on what he observed. The more closely he relied on the life around him, the more compelling was his art.

Vermeer himself tells us this in his Art of Painting, his visual testament to his ambitions. The composition shows a painter seated at his easel from behind, dressed in an old-fashioned Netherlandish costume, painting a young girl adorned with laurel and holding a trumpet and book. The painter is often identified as Vermeer based on his comparable hair and costume in his Procuress of 1656.

Since 1949, the girl has been called Clio, the muse of history writing, following the conventional notion that history was the highest category of art. But the mature Vermeer did not paint history. Scholars have also mistranslated documents in which Vermeer’s widow and mother-in-law described a painting “in which ‘Painting’ is being depicted [uytgebeeld, which also means performed as a role, or personified as a character on stage].” The girl personifies Painting [Pictura], holding attributes associated with Painting, while others are arrayed on the table before her. These include a blue and yellow “garment of changing color,” likely the same textile artfully wrapped around her head as Vermeer’s Girl With a Pearl Earring, who therefore might also personify Painting. In neither case does she take her job very seriously. In place of “high” historical or allegorical content, Vermeer characterizes Painting through his playful relation to his model as a particular individual that he knows intimately. As a painter of modern life, Vermeer’s greatness lies in the domestic, familial character of his art.

It is the more conservative scholars who apply an anachronistic, premodern paradigm of art as illustrating an institutional (historical) message. Vermeer was instead a pioneer of the modern paradigm of art as expressing the artist’s unique circumstances, experiences, and sensibilities, a paradigm first articulated in texts from the Romantic period. The same period witnessed the founding of the modern discipline of art history, which began to gather individual artists’ oeuvres, relevant facts about their lives, and diverse interpretations of their works, and first “discovered” Vermeer as an unrecognized genius. We continue to pursue these goals today.

Surprisingly, given the number of monographs devoted to Vermeer’s relatively few paintings, no scholar put forward an account of his gradual painting-by-painting development before my 2009 book. Several authors identified the figures who appear repeatedly in his compositions as Vermeer, his wife, his gradually ageing eldest daughters Maria and Elisabeth (Lijsbeth), and even the family maid in Vermeer’s Milkmaid (the suggestion of the historian J.M. Montias and likely inspiration for Chevalier). But no one sought to address Vermeer’s use of family models in a systematic way, and some rejected the possibility altogether.In his Art of Painting, Young Woman With a Pearl Necklace, and Girl With a Pearl Earring, scholars recognized the same beautiful young model who resembles Vermeer’s wife in earlier compositions. Maria was born around 1654 and would have been 13, 15, and 16 if the paintings in question are dated 1667, 1669, and 1670, respectively. The plainer model in Vermeer’s Girl Writing, Girl With a Guitar, and Lacemaker, who resembles Vermeer in his dated self-portraits, would have been his second daughter, Lijsbeth.

Another crucial dimension involves roughly a fifth of the paintings currently assigned to Vermeer—five in New York City alone—that were based on the same models, objects, and interiors and adapt or combine elements of Vermeer’s compositions but do not correspond to his level of technical mastery, characteristic approaches, or logical development. The failure to identify these “misfit” paintings, which possess their own divergent appeal, has precluded the recognition of Vermeer’s painting-by-painting development and vice versa. Dates now assigned to Vermeer's paintings are also often too early, because they are not based on a painting-by-painting account of his development, include the misfit paintings, and do not take into consideration his models and their approximate ages. Earlier authors had questioned each of these misfits as possibly painted by a pupil or one of his children but did not pursue that possibility or the paintings as a group. Vermeer did not register any pupils, but his follower could have been one of his children, whom he did not need to register, most plausibly Maria. Two misfits, Mistress and Maid in the Frick Collection and Woman With a Lute, were also traded against a huge debt to a baker after the deaths of Vermeer and his patron, who bought Vermeer’s Lacemaker, his last painting. That is, the paintings were sold and possibly produced as forgeries to alleviate the family’s financial straits. Maria’s apprenticeship must therefore have been a family secret. Perhaps partly because of these circumstances, she does not appear to have pursued painting after her marriage and her father’s death.

Most intriguingly, two of the misfit paintings, Girl With a Flute and Girl With a Red Hat, have been associated with or even identified as self-portraits, and together with a third, Girl Interrupted, also in the Frick, appear to portray the same model as Girl With a Pearl Earring. Since the Frick paintings cannot travel, the present exhibition offers the only possibility of comparing the originals in proximity. Did Maria portray herself in these works? If so, despite her technical challenges, she surpassed her father in psychological intimacy. Girl With a Red Hat, which would portray her at about 18 around 1672, also offers an astounding virtuoso display, including what may be the most fascinating (albeit implausible) headgear in the history of art. Her precocious masterpiece, if that is what it is, further mirrors and thereby transforms our experience of her father’s earlier Girl With a Pearl Earring as not just a pretty face or even an image of Vermeer’s daughter, but a portrait—another portrait—of the artist as a young woman.

These ideas, the subject of an all-day symposium at the New York Institute for the Humanities at New York University last spring, are admittedly speculations. Yet no one has previously sought to identify the models in these paintings in a systematic way, account for the misfit paintings, or explain Vermeer’s painting-by-painting development. These factors are inextricably linked in the ongoing process of understanding Vermeer’s work, including Girl With a Pearl Earring and might ultimately lead to the discovery of another unrecognized genius.

Update, Oct. 30, 2013: Due to an editing error, captions for the three paintings in this piece featured the dates commonly believed to be the original dates of Vermeer’s work. We have updated the captions to reflect Binstock’s theory of their order.

Benjamin Binstock is a specialist in Renaissance and Baroque art and art historical method. He is completing a book on young Rembrandt.

See the original article on Slate.