Agnes refused her parents demands to marry at the age of 13, so she was sent to a brothel to live out the rest of her days. As she walked along the streets, stripped of her clothes and dignity, her hair grew down to her ankles, protecting her from onlookers.

This is not a supernatural tale in the vein of zombies, werewolves, witches or vampires; this is the story of Saint Agnes, born circa 291 A.D. Young adult stories are all the rage now with "Twilight" and "The Hunger Games," but the first YA stories ever told were the stories of saints. It's rich fodder, and inspired me to write a teen series reimagining three saints as modern-day Brooklyn teens.

The way I see it, the early saints and martyrs were the first real teenage superstars. Icons in the truest sense of the word. Regardless of whether you believe the legends are true and accurate is almost irrelevant. The saints and their stories have been influential not just to believers, but on Western Civilization and have far outlasted the 15 minutes of fame generated by today's tabloid celebs who score a fragrance or a denim line at Kmart. These saints were teenagers themselves, and were inspiring teens and adults alike.

So what do saintly tales of death and divinity, gruesomeness and glory have in common with today's YA fiction? For starters, the martyr legends are love stories. Divine love, to be sure, but love stories nonetheless. Young women, barely teenagers, devoted to a supernatural being, consumed by a forbidden love, against the wishes of authority, be it their families or society at large. Sound familiar? Rose of Lima was so beautiful that it was almost impossible to ward off potential mates and keep her love true. She was so determined that she nailed to her head a wreath of flowers, the one her mother made her wear to attract even more attention, and then scrubbed her face with pepper until her face blistered so she would be less attractive to possible suitors. All in the name of love.

Secondly, the martyr legends feature very strong female characters, chock full of badassery. Having been raised Catholic, I'd always had the impression that the men and women who'd sacrificed themselves for their faith were passive, indifferent to the material world, but nothing could be farther from the truth. In their world, at that time, refusing to deny yourself, your beliefs, was the ultimate act of defiance. They seemed to posses an inner certitude and confidence unswayed by the opinions or demands of others. Some might call it faith, others call it madness. I call it being a teenager. Lucy, Patron saint of the blind, is a great example of this. One take on her legend is that she gouged her own eyes out so she would be less attractive to men. Her refusal to be objectified is the subject of story, song and iconic art. When you see paintings of Lucy, she is always holding her eyes on a plate, a reminder of both her self-inflicted suffering and obstinance. Nothing more punk rock than that.

Thirdly, martyr stories, like a lot of YA lit, are as much about death and immortality as they are about love. Not so much "till death do us part," but more like "till death do we start." They are misfits in every sense of the word. Not really fitting in with the living or the dead. To willing seek out a heroic sacrifice -- the very definition of a martyr -- is a time-honored theme dating back to our earliest myths. The sacrifice itself is always fatal and always motivated by love -- human, immortal or divine -- placing the saints and today's waking undead (thought separated by centuries) in the same macabre boat. Whether it's the bite of the vampire or zombie or the welcomed sharp edge of the executioner's blade, death is the path to immortality though of a very different kind. Saint Cecilia, the patron saint of musicians, survived three attempts at beheading, and even after the last successful attempt, she continued to sing for three days after. In YA, the immortal lovers are bound together through all eternity but their souls are burdened, having traded peace for eternal passion, where the martyrs are liberated by death, their souls free at last to fly to the object of their obsession and live together in holy harmony. They live to die, or live a life of death, so to speak.

Lastly, saints are supernatural problem solvers. Like every main character's best friend, they are there to help, to comfort in times of trouble, or just to listen. Lose something? Broken-hearted? Possessed? Depressed? Suffering from plague or an STD? On your deathbed? Yep, there is a saint for that. A few heartfelt prayers and a sincere request for intercession and help is on the way. From animal attacks to anorexia, magic spells to mental illness, insomnia to insecurity, obsession to oversleeping, slander to sexual temptation, the saints have got your back, and are always there for you to talk to. With that in mind, I've created a guide for those who could use a supernatural BFF in their corner. No matter what the problem, likely, there's a Saint for that! 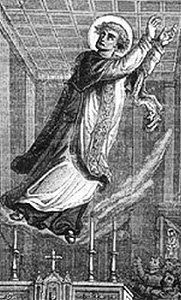 1 / 16
Saint Joseph
Have a test coming up and need a little extra help? St. Joseph of Cupertino is the Patron Saint of taking exams.
WikiMedia: