The opening of The Giver invites us into an ordered black-and-white world, peaceful but devoid of color. Compared to the images of carnage prevalent on our TV news, this polite, monochrome, homogenized society can seem seductive. But is the absence of desire and love too high a price for the eradication of violence and war?

Director Phillip Noyce explores this question in the film adaptation of Lois Lowry's novel. The Giver is a dynamic cinematic rendering of a dystopian world whose young hero Jonas (Brenton Thwaites) defies the rules. When he is named "Receiver of Memory," he learns from "The Giver" (Jeff Bridges) that free will exists. Glimpses of the past reveal that the price for beauty and creativity is chaos and conflict. After he secretly stops accepting the daily injection that deadens desires, he takes action to rescue his society from numbing conformity.

The Giver invokes films from earlier eras. Perhaps because this is the 75th anniversary of The Wizard of Oz -- about which I was invited to speak on CBS This Morning August 12 -- the transformation from a black-and-white world into one of color links the 1939 classic to The Giver. But on a deeper level, their title characters are mysterious men who may -- or may not--be the agents of salvation. 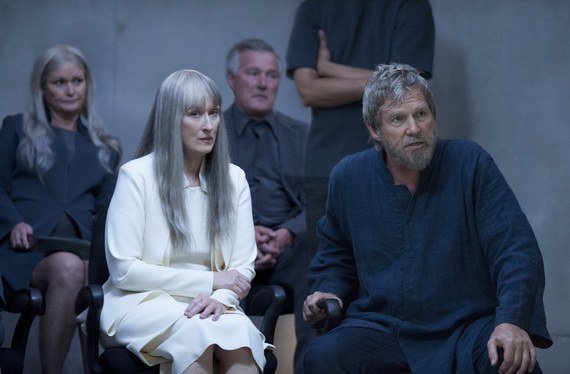 Both films are about adolescent rites of passage, which include rights of passage such as defying authority. Judy Garland's Dorothy learns quickly enough how to distinguish between a wicked witch and a good one. It takes longer for Jonas to grasp that the "Chief Elder" played by Meryl Streep is far from benign and needs no broomstick: she transcends space by being beamed down into various rooms.

The "Wizard" played by Frank Morgan is a quintessentially American character -- a mere mortal, a charming charlatan that goes back to Melville's Confidence Man and extends to James Franco's endearing huckster in Oz The Great and Magnificent of 2013. The message of The Wizard of Oz, therefore, is that miracles lie not in the stars or some external deity, but in human courage and compassion -- what you had in you all along. The answer is not in Oz, but in us.

As played by a gruff and grizzled Jeff Bridges, the Giver is closer to a real wizard: this mysterious, solitary man is the only one who knows human history (and the sole citizen who has permission to lie). When he transmits images of this knowledge to Jonas, he enables him to transcend their self-enclosed community. Jonas's journey enacts the yearning articulated in "Somewhere Over the Rainbow": flying "over the chimney tops" to the forbidden "Elsewhere" of The Giver, he moves ever closer to what resembles a traditional home. 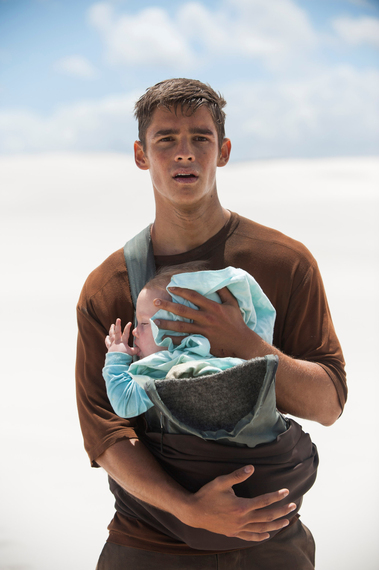 Photo: Brenton Thwaites as Jonas in The Giver. Copyright: © 2014 The Weinstein Company

But perhaps both films share a questioning of what "home" means. Salman Rushdie perceptively proposed that The Wizard of Oz is not about the closing line, "there's no place like home," but the dream of leaving, the celebration of escape. As in that "road movie" of 1939, Jonas must enact the combined courage, brains and heart to abandon the placid familiar for the dangerous unknown.

At the premiere party for The Giver on Monday evening, Meryl Streep told me she found it surprising that different ideological camps are claiming the film. If The Giver has found fans on the political right as well as the left, this is not so different from the response to Invasion of the Body Snatchers in 1956: Don Siegel's film was embraced by those who feared "Commies" as well as others who rejected Senator Joe McCarthy's fear-mongering red-baiting.

That cautionary tale posits a scenario similar to The Giver: human beings can be taken over by "pods," doubles of ourselves who have been drained of emotion. Philip Kaufman's Invasion of the Body Snatchers (1978) is even more chilling. The psychiatrist played by Leonard Nimoy says soothingly, "You'll be born again, into an untroubled world," painting a seductive and therefore frightening portrait of those who do not question their surroundings. Kaufman set his version in San Francisco, culminating in a memorable final shot that undercuts audience desire to identify with a hero.

Despite the exhilarating pyrotechnics at the end of The Giver, its message cannot be reduced to an adolescent becoming an action hero. Rather, Jonas learns from Bridges' character the value of difference and of choice, especially when the Giver makes an important distinction between feelings (superficial and temporary) and emotions, which are deep and rooted in memory. The Giver makes the knowledge of history a precondition for freedom. In a very American tradition, it valorizes memory and passion above serenity and predictability.

______________
Annette Insdorf, Director of Undergraduate Film Studies at Columbia University, is the Moderator of the 92nd Street Y's "Reel Pieces," and the author of books including Philip Kaufman and Indelible Shadows: Film and the Holocaust.