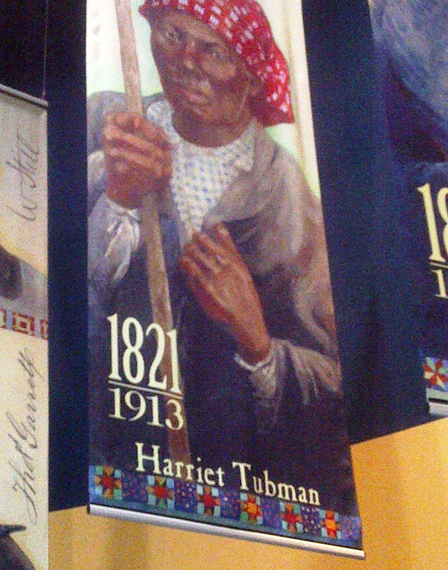 A banner bearing a portrait of Harriet Tubman, credited with leading scores of slaves to freedom aided by a secret network, hangs inside the National Underground Railroad Freedom Center in Cincinnati, Ohio. (John W. Fountain, PHOTO)

She stood gloriously, her hair swallowed by a red scarf, the strength and glory of her taut brown face a symbol of a beauty that does not fade. Still, I imagine, she likely wouldn't make the cover of some glamour magazine today without an "extreme makeover" or perhaps a perm or touch of silky hair weave.

And yet, Harriet Tubman, for me, represents the essence of those beautiful black women like my grandmother, who rocked generations of babies, whispered prayers over us, nursed us by our bedsides with tenderness from sickness to health, and poured their love and souls into the posterity of their families.

And as I stood not long ago in the National Underground Railroad Freedom Center in Cincinnati, beneath a banner bearing Tubman's portrait; as I reheard the story of the late-night freedom train, the river crossings, the terror; as I soaked in the images and tales of courage, especially of black women, I was deeply moved.

And I was never more certain of the need for us as black men to celebrate, uplift and embrace the beauty of black women who gave most of us life, who have borne our children, whom we call mother, daughter, sister, aunt, and in whose likeness we also are made.

For also evident in the museum was the historic degradation and humiliation of black women--etchings of naked, brutalized sisters lynched from trees or lying shackled. Our docent spoke of countless black women sold as a "fancy"-- those "pretty," usually light-skinned and used as sex slaves by white masters.

Amid my digestion of all the sordid details, I was reminded of the ways we as black men since slavery have also sometimes partaken in the degradation of our women. It has been manifested at times by our irresponsibility or abandonment, leaving them to raise our children alone, or sometimes by our caustic denigration, dehumanization or objectification that still dominates the worst of rap music and videos, and that also permeates our culture.

Add to the equation--that by actions or by declaration--some brothers prefer women of other races to black women, and I can feel a sister's pain, even understand the compulsion by some sisters to try and mold themselves into the image that appears to be the apple of a man's eye, whatever the costs.

I also know that all black men are not guilty--at least not completely conscious contributors to the perpetuation of any notion that a black woman's beauty, in its natural-born, Afro-centric splendor, is less than the beauty of other women.

Still, I wonder about the impact of growing up as black boys bombarded with the images of so-called beautiful women--from books to magazines to television and Hollywood movies--images of women whose lauded physical traits bear little resemblance to the general populous of African-American women.

This much I have resolved: That if black women feel compelled to perm their hair, to wear hair weaves that flow down their backs, or even to indulge in bleaching creams or color eye contacts just to make them "feel beautiful," that is completely their choice.

But this much I also believe: That as black men, so many of us need a makeover--an internal rebirth or reshaping of the lens through which we see the beauty of black women. For if we do not affirm, lift, love, embrace and treasure them--just the way God made them--who will?

Theirs are the precious wombs that carried us and our children. Their brown eyes and faces are the ones in which we first saw the light of love and life. In their nappy roots lies our royal African lineage. And in the incomparable strength of their bronze hips and arms, they have carried us, even our souls, all the way to freedom.

My dear sisters, you are so beautiful, just the way you are.