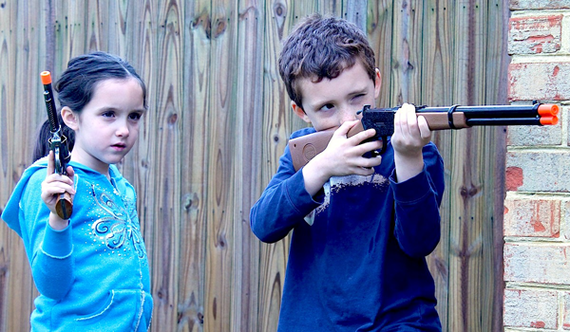 It's quite disturbing this Christmas to witness our high streets glamorizing weapons of violence in the lead up to the celebration of Christmas Day itself. A day, which is meant to symbolize peace, and goodwill to all men, and women, especially post the Paris 2015 atrocities. In the advent of a heightened paranoia around terrorism repeating itself in some other unsuspecting town or city, you would hope that both retailers, and parents would show some sort of leadership around this issue.

I was prompted to write this after recently seeing one high street retailer's front window, stacked high with replica toy machine guns. Whilst most toy guns might bear little resemblance to the real McCoy, many are close identical replicas and, from a distance could prove quite threatening to a casual observer.

With names like Shooting Play, Army Machine Gun and Rapid Firing Gun, are we not pretending that these toys are doing anything other than re-enacting death and destruction in a play format? Do these sorts of toys not reinforce and familiarise children with a destruction led, conflict narrative, normalising war and weapons, which is also regularly reinforced through popular entertainment, films, TV and video games? 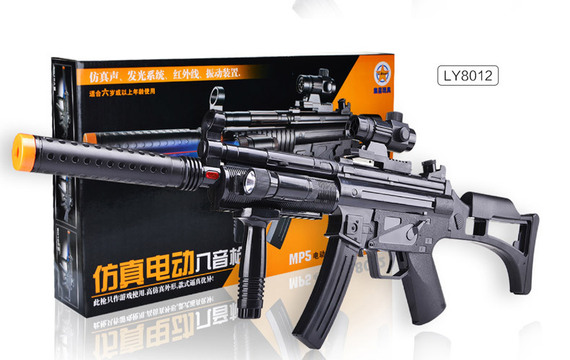 Whilst gun culture in the UK is not remotely as prevalent as the US where there have been 294 mass shootings so far in 2015 we need to look at society and how our values are communicated as there appears to be no less promotion of guns and symbols of conflict in the retail arena, even though there's a noticeable rise in knife and gun crime among the young in most urban environments. Certainly to cite the US again for decades, the most dangerous piece of machinery was an automobile. But now, it's a gun.

It's also interesting when ones does a search on Google for 'children's toy guns' one finds an array of AK47's, military assault and hand guns replicas popping up.

As the current program on Channel 4 called "The Secret Life of 4, 5 and 6 Year Olds" shows. This age is arguably the most crucial period in a child's development as they cross the threshold from family life into the social arena of school, and the tools of social interaction these children are learning can lay the foundations for the relationships they will form right across their adult lives.

Klaus Dodd's, Professor of Geopolitics at Royal Holloway, University of London is examining the historical and contemporary play with Action Man over the last 40 years. He believes that parental concern with weapons, which also loomed large in previous decades, masks an even bigger issue now.

"There is a kind of anxiety that expresses itself through war toys about Britain and its relationship with militarism. We are a country addicted to war. We are a highly militarised society and I think children and the relationship to toys is one aspect of that broader debate about what Britain is and represents."

A generation ago or two, it wouldn't be unusual to see kids running around their neighborhood wielding toy guns as they played cowboys or cops and robbers. Myself included. But as school shootings have become frighteningly commonplace, playing with toy guns doesn't seem that innocent anymore?

Many schools around the world have even implemented zero tolerance policies on guns, and in some cases, have gone as far as suspending children for pointing their fingers in the shape of a gun and pretending to shoot another student. Therefore, understandably some people feel that playing with toy guns sends the wrong message, making light of a deadly weapon -- or worse, that toy guns increase aggression in children.

Playing with a toy gun can also have painful and even deadly consequences. There have been several incidences that involved children being shot accidentally.

It's easy to see violence and aggression in society as a whole and in the media, through TV, video and the cinema. And then one hears a sweet, innocent child saying "bang bang" and "I killed you." It's not surprising in today's increasingly violent culture not to worry that he/she could grow up to be violent.

In the same way that we go to the gym to train our bodies, we need to feed our minds, and those of younger generations and our good citizens of tomorrow. We need to do this with the appropriate symbolism through accessories and toys that promote goodwill, harmony and creativity as an antidote to extremism, violence and destruction. And there is no greater time to instil these values in society, than now, at Christmas, through play.

More:
guns in schoolsconflictChildrenParentsChristmas
Newsletter Sign Up
Raise the kind of person you'd like to know
Subscribe to our parenting newsletter.
Successfully Subscribed!
Realness delivered to your inbox