Only 5 percent of the world's population lives in the entire blue region. For comparison, the same number of people live in the small red region. 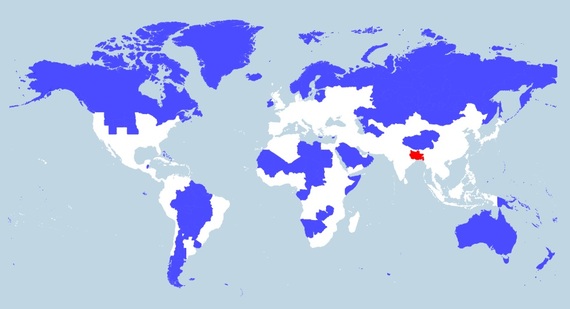 Believe it or not, it's true. There are just as many people living in the small red area as there are living in all the blue areas combined.

This is a modified version of a map from reddit user Ibisdigitalmedia. When I first came across the map, via the Twitter feed of @NinjaEconomics, I was skeptical, so I went through and checked the numbers.

The original map turned out not to be entirely correct (the red region covered only about 3 percent of the world population), so I made this one based on the same concept.

Can you identify the two countries within the red region?

Below is the full list of territories covered by each region, along with their 2014 populations.

Territories in the blue region

Territories in the red region