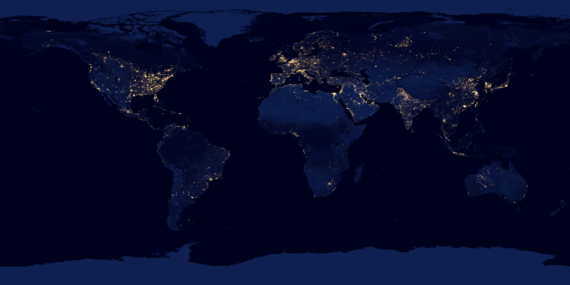 Cities. Cradle of civilization, or den of iniquity? They are certainly both, but the central and defining role of cities since the birth of democracy in Athens is the creation of a polis or a political entity defined by geography, and ruled by its citizens. As the rush to urbanization intensifies in non-democracies such as Iran, China, and Pakistan, is it not inevitable that their cities, with populations truly dwarfing the few hundred thousand inhabitants of ancient Athens, carry within the seeds of political change? And challenges for their national governments?

This is not a hypothetical situation limited to any one country. We saw this summer our own national leader rushing back from vacation to quell chaos in a small city near St Louis. We are seeing today in places such as Ferguson, Missouri what happens when conditions in cities become intolerable for their inhabitants. The story resonates, globally. Lack of jobs, combined with plenty of drugs and deadly weapons, urban poverty, environmental degradation, loss of faith in local government- these triggers exist everywhere.

Megacities, the world's 28 cities with populations greater than 10 million, home to a greater numbers of urban poor than the disadvantaged rural populations they replaced, are themselves dwarfed by a city with no geographical boundaries. The real city today, the one that matters for the long game, is a virtual polis inhabited by 2.7 billion global netizens, the World Wide Web. A place where violence and injustice is communicated as it happens.

The Arab Spring would not have occurred in the countryside, without access to instant communications. Regardless of the current state of the various unfinished revolutions in the Middle East, there is no doubt that urbanization and electronic communication were enabling if not sufficient conditions for political change. While states can attempt to control communications through their access to infrastructure, urbanization is a wave that cannot easily be reversed because of its economic benefits. As economist Gail Foster has recently said:

Social media tools and technology have transformed global economic and political environments. A rapidly urbanizing world may be economically better off but politically more unstable.

In fact, one revolution in history, the victory of the Chinese Communist Party in 1949, resulted in an unprecedented and period of controlled urbanization that persists today. During the Cultural Revolution, millions were sent to the countryside for re-education. The combination of the houkou system, which provides social benefits for city dwellers over itinerant peasants, coupled with legislated birth control, significantly slowed population growth in major Chinese cities over the past sixty years. Despite having over 200 cities with populations over one million, and two of the most populous cities on the planet, some scholars and economists speculate that absent controls these population figures would have doubled.

Mao Zedong, the leader of China's revolution who glorified China's peasantry, famously hated cities and for a long while declined to live in Beijing. As Vladimir Putin today eschews Moscow, autocratic leaders realize that cities could become their enemies and require control. One method to achieve this end is to idealize pastoral life as the center of national cultural identity.

Adolf Hitler loved the countryside, and wrote in "Mein Kampf" of his particular hatred of his home town of Vienna: "my dislike for that mammoth city, which greedily attracts men to its bosom, in order to break them mercilessly in the end." According to Randall Bytwerk, professor emeritus of communication arts and sciences at Calvin College and a scholar of Nazi propaganda, the Nazi's promoted "the pseudoscientific idea that theorized that moving from the countryside to the city had weakened and reduced the 'Aryan race'." His collection of posters from the era is illustrative. This one compares urban and rural life. 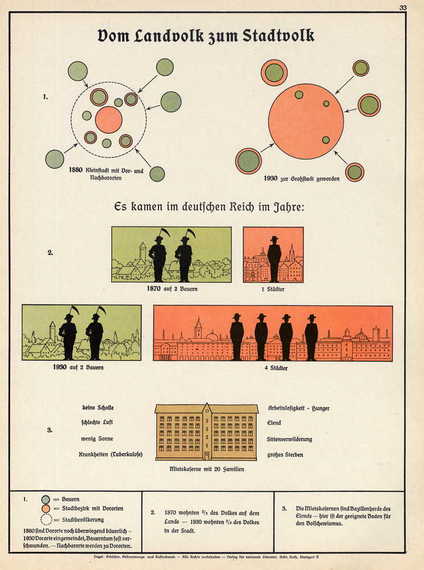 The illustration above is a building with 20 apartments: "No soil, bad air, little sun, disease (tuberculosis), unemployment and hunger, misery, moral decline, high death rate." Professor Bytwerk's translation of point 3: "Apartment buildings are the breeding ground of misery. They are fertile soil for Bolshevism."

Bytwerk adds, "There were some artworks of cities, but not much. There was a whole genre of idealized countryside scenes, suggesting that the essence of the nation depended on a healthy peasantry."

Food security is a part of this equation, since urban areas by and large are dependent on farmers for their food. Japan, as always, remains a contrarian when it comes to urban bias. Home to Tokyo, the world's largest city with a population of 38 million, the amazing power of its rural constituencies today threaten the Transpacific Partnership agreement now being negotiated with eleven other countries. Due to the vagaries of its representative political system, the Japanese government is holding firm on protecting its farmers. According to Richard Katz of the Oriental Economist, the total number of beef ranchers in Japan today is only 70,000 households, the number of diary farmers in the entire country numbers only 21,000 and the number of pig farmers has shrunk to just 6,000 households.

The bottom line: the entire nation's interest in a TPP is being held hostage to less than 100,000 households out of a nation of 46 million households.

My bottom line: urbanization is a political process. Most of us are urbanites, and for most of us, urbanization has meant modernization and economic progress. But have we reached a new plateau, a place where we have reached the limits of the economic benefits of urban growth? How will the politics of cities evolve?