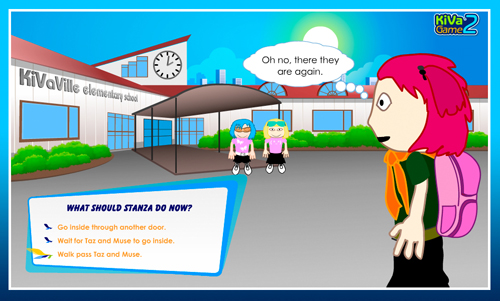 "We believe that influencing the bystanders is a key to successful prevention of bullying." -- Professor Christina Salmivalli

It takes a community to prevent bullying in schools, which is expected to affect 13 million children in the U.S. in the current school year. Stopping the bullying epidemic also requires funding, research, a holistic program developed with that research plus the collaboration and commitment of all the principal stakeholders.

Educators in Finland understand how to reduce bullying and victimization in their country, which has one of the world's leading education systems. They already have a comprehensive anti-bullying program in place called KiVa™ (from the Finnish words, kiusaamista vastaan, meaning against bullying). A key measure of the program's success is that 98% of the students whose bullying incident was tackled by the school's KiVa™ team said their situation improved.

There are 2800 schools in Finland providing comprehensive education from grades 1 through 9. At the moment, 90% of Finnish schools are logged in as users of the KiVa™ anti-bullying program and approximately 1500 schools use it systematically and repeatedly. Additionally, other countries around the world want it.

Today I am joined by Professor Christina Salmivalli of the University of Turku, Finland. For over 20 years, she and her team have done school based research on bullying and its prevention. She is the principal investigator of the KiVa™ anti-bullying program, which received first prize in the European Crime Prevention Awards (2009). KiVa™ has also won the Humanist Act of the Year Award (2008), the Child Act of the Year Award (2010), and the Campus Award (2012) in Finland. The latest evaluation study of KiVa™ received the 2012 Social Policy Award in Vancouver for the best article in the SRA (Society for Research on Adolescence). I am also joined today by teacher Juha Ollila who works with Professor Salmivalli as a teacher expert and is in addition international project manager for the KiVA™ anti-bullying program. 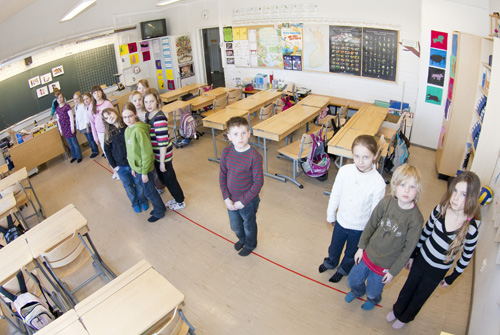 "Socially anxious children are at high risk of being victimized, especially in classrooms where reinforcing the bully is normative (occurring at high levels)." -- Professor Christina Salmivalli

Juha, why did the Finnish government and Finnish educators decide to make bullying prevention a priority?

Bullying became a big concern in Finnish society in the 1990´s and there were some changes in legislation because of this concern. However, the annual prevalence survey (School Health Promotion Study) showed that there were no changes on national trend data. Before KiVa™, Finland´s prevalence of bullies and victims was slightly below average based on studies done by the World Health Organization but they were still higher than in Sweden, for example. The Ministry of Education commissioned Professor Christina Salmivalli and her team to develop an anti-bullying program that would be suitable for national use because of the decades of research already done by her group in Finland.

Christina, what were the most important findings in your research on bullying?

In my own research, the first important thing was probably the notion that bystanders ARE part of the bullying process. My first publication on this topic came out in 1996, and at that time it was still common to focus (both in research and in interventions) on the individual bullies and victims. Today, the view of the group as participant is widely spread and also mentioned (e.g. empowering the bystanders) in many bullying prevention/intervention programs. After the first 1996 study, my group has continued to focus more on the bystanders than on bullies or victims. We know that classrooms vary considerably with respect to the degree of bullying problems, and this variation can be explained by classroom norms and actual bystander behaviors (whether students witnessing bullying tend to take sides with the victim or to join/reinforce the bully). We also know that individual-level factors, which usually increase the risk of victimization, do not operate similarly in all classrooms. For instance, socially anxious children are at high risk of being victimized, especially in classrooms where reinforcing the bully is normative (occurring at high levels). We believe that influencing the bystanders is a key to successful prevention of bullying. Also, we have examined which individual and classroom-level factors are associated with constructive bystander behaviors such as defending and supporting the peers who are targets of bullying. For instance, in order to take sides with the victimized peer, empathy is not enough. Many students who have lots of empathy towards victims still do not act upon it. We need to provide students with safe strategies to take sides with the weaker ones. This information has been utilized in developing the materials included in the KiVa™ program. 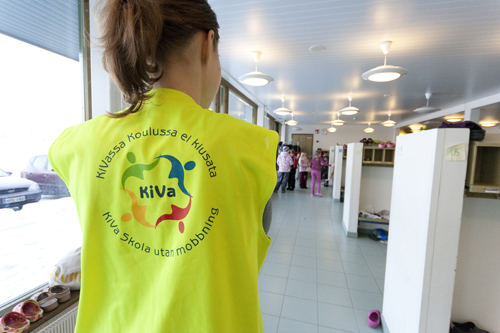 "We have tested the program in a very rigorous randomized controlled trial." -- Professor Christina Salmivalli

Christina, why do you believe the KiVa™ approach can combat bullying effectively?

One key is focusing on the bystanders. Another key to combating bullying is the systematic way in which KiVa™ guides school staff to coordinate and organize anti-bullying activities. KiVa™ is not just a pack of materials, it is a process. I have heard from Finnish teachers and students that the program materials are attractive and easy to implement. We have included some special features such as anti-bullying computer games. These are motivating ways to learn about bullying-related issues.

And, of course, we have very convincing evidence that KiVa™ works. We have tested the program in a very rigorous randomized controlled trial (Note: between 2007 and 2009, a large-scale randomized control trial was conducted with over 30,000 children from 234 elementary and high schools. 117 schools implemented KiVa™ and 117 continued with their existing action plan or anti-bullying policy. Results show KiVa™ was effective in reducing bullying and victimization during the first nine months of implementation. The study also showed that KiVa™ reduced depression and anxiety among students. Additional positive outcomes included an increase in school liking, academic motivation, and academic performance.) 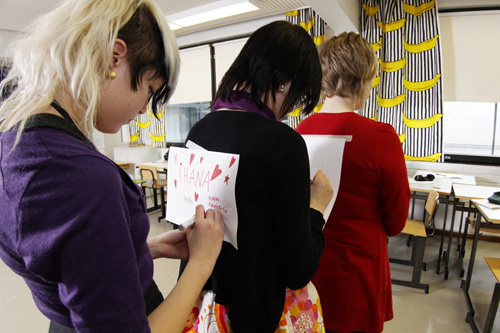 "We need to provide students with safe strategies to take sides with the weaker ones." -- Professor Christina Salmivalli

Juha, what are some of the special preventative characteristics which make the Kiva™ program unique?

School personnel need concrete tools for bullying prevention work with children and youth, just as they need clear guidelines to intervene when bullying is detected. Adults are not usually present when the bullying takes place so children need to know how to behave constructively when witnessing bullying incidents. So KiVa™ teaches not only teachers but also students what to do, when to do it and how to do it. Of course, reporting systematic bullying to adults is also important, and KiVa™ makes that easier by providing an online reporting tool (Note: a virtual "mailbox" in the KiVa™ computer game) that students can use to report bullying they have experienced or witnessed directly to the KiVa™ team in their school.

Other special characteristics are that we have both universal and indicated actions. Universal actions illustrate commitment and coordination at the school level. Types of things that signal we are a KiVa™ school include visible vests for teachers supervising recess time, student online surveys, student lessons, computer games, virtual learning environments, and a website and guide for parents.

Indicated actions include tackling the cases of bullying that come to the attention of school staff. In such cases, the school-based KiVa™ team conducts individual and group discussions with the students who have been bullying and the target child. 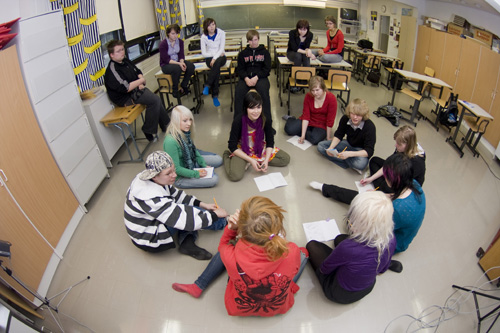 Is the strategy as effective for the child who is most likely to be the bully?

Speaking as a teacher, a KiVa™ teacher has been specially trained in the KiVa™ practice. We have KiVa™ exercises which enable us to put different types of students in different types of positions. For example, one might put the person who is more likely to bully in the position of the victim, and vice versa. Further, the Universal actions are not only for the students and the teachers but also for the parents, who play a big role. Before the program starts, we recommend that parents are educated and engaged via the Parent-Teacher meetings. We find that parents support the program because it creates a better school environment for their children.

When bullies are identified, how are they punished?

Punishment is not the key issue, at least in the beginning of the process. There are two slightly different strategies that KiVa™ teams might use when tackling bullying cases; we call them "confronting" and "non-confronting" approaches. Without going into detail, both approaches are based on the idea that the bullying students themselves, after discussion with KiVa™ team members, suggest how they will change their behavior. After one or two weeks there is a follow-up in which the adults make sure that bullying has stopped. Punishments may come if these approaches fail, but in most cases the situation has improved by the time of the follow-up meeting. The kind of punishment used varies across schools. 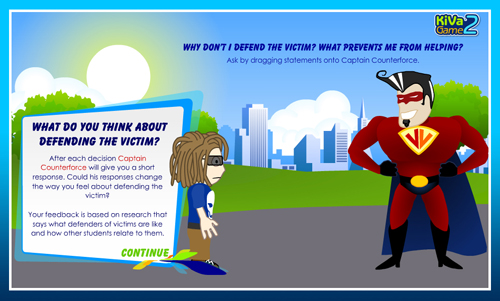 "Adults are not usually present when the bullying takes place so children need to know how to behave constructively when witnessing bullying incidents." -- Juha Ollila

Where else in the world is the KiVa™ program?

Professor Rene Veenstra from the University of Groningen is implementing KiVa™ in the Netherlands as a part of his and his group's study. There are 70 schools using KiVa™, and 35 control schools. Dr. Veenstra is doing research on the implementation and its effects during 2012-2014.

Professor Judy Hutchings is responsible for the KiVa™ implementation in the UK in Wales. There are 14 schools using KiVa™ in Wales starting this school year.

Professor Julie Hubbard is testing KiVa™ in the U.S. in Delaware this school year in 60 classrooms in 6 different schools.

In Luxembourg, the European School is testing French, German, and English versions of the KiVa™ materials.

A Japanese version of KiVa™ material is being evaluated by Professor Yuichi Toda and his team (University of Osaka). Hopefully some Japanese schools will soon be testing KiVa™.