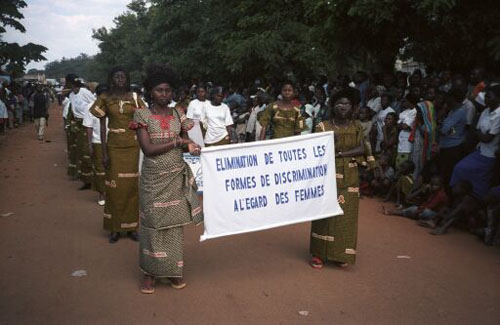 Educated women with financial backing, technology and connections can contribute to their economies and further the growth of their societies just as efficiently and successfully as men. Yet discrimination against women burdens our world in so many devastating ways. Sixty-six million girls are out of school worldwide. Girls are the victims of 80 percent of all human trafficking crimes. Girls and women are the victims of 75 percent of the AIDS cases in Sub-Saharan Africa, the region hardest hit by this disease. One hundred and fifty million girls are victims of sexual violence in a single year and 50 percent of all the sexual assaults in the world are against girls under 15. Fourteen million girls under 18 will be married this year and, tragically, the number one cause of death for girls 15 - 19 is childbirth.

What significant movements or endeavors are underway from women themselves to correct the situation? How is technology helping women's plight? What effective steps have been taken to educate girls and boys on the AIDS issue? What can private firms and corporations do to promote women's equality in the workplace and in society? What roles are international lenders and western customers of emerging nation's goods and services playing in accelerating the process to end gender inequality? To explore answers to these and other questions for Part 3 of "Women," I connected with Mary King (Professor of Peace and Conflict Studies, University for Peace), Sir George Alleyne, (Chancellor of the University of the West Indies and former UN Special Envoy for HIV/AIDS in the Caribbean), Dian Gomes (Group Director, MAS Holdings), Linda Scott (DP World Chair for Entrepreneurship and Innovation Said Business School, University of Oxford) and Meg Jones (Women and Trade Program Manager, International Trade Center). 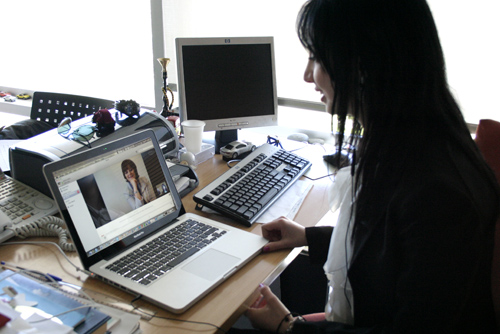 "There are major programs underway, such as the distance mentoring platforms for entrepreneurs administered by the Cherie Blair Foundation for Women." -- Linda Scott

Mary King: Women know that no country in the world has solved the problem of gender inequity and they are not passively waiting for parliaments or governments to take initiative. Working usually within civil society, women have historically fought fights for others and in so doing become effective proponents for their own uplift. Rarely is it acknowledged that their self-liberation efforts have benefited entire societies.

Protesting is simple. More important is the ability to organize, something that many nation-states wish to repress. Yet social movements originated many of the 20th century's human rights laws and international conventions, and played major roles in ending the slave trade in the 19th century. Most women's activism has historically been nonviolent direct action, which only shows signs of strengthening in the 21st century. Today, women's movements are mobilizing with strong support from men, holding greater promise that gender equity can be achieved.

In Zimbabwe, for example, the Musasa Project (named for an umbrella-shaped tree) gives psycho-social support to victims of gender-based violence including rape, while the Doors of Hope Trust is a support group consisting of and founded by women victims of rape. Meanwhile, the Padare/Enkundleni Men's Gender Forum involves male rock stars and media celebrities to challenge maltreatment of women as part of manhood. In Egypt, where sexual aggression against women rebounded like coiled serpents after the revolution in Tahrir Square, the "Tahrir Body Guards" are men who stand guard for women, due to uncertainty of police protection. Worldwide, women are fighting systemic violence against women, seeking to end the patriarchal impunity routinely accorded for sexual assault, atrocities, and murder of women. Some campaigns seek parallel justice, acknowledging that there are differences between a just outcome for the raped as opposed to punishment for perpetrators of sexual crime. Others seek an end to the practice of dowry, closely linked to female infanticide. Local movements are pressing for a village-by-village end to female genital mutilation.

In Syria, anyone can report molestation of women to an international NGO called "Women under Siege." The Women's Media Center has a reporting project on rape as a weapon of war. Indeed, transculturally, women's organizations make abundant use of networks and networking. Mapping of harassment sites as warnings is underway in cities from Manhattan to Cairo. Zones free from rape or child marriage are being formed. Just as school-age children led the Children's Crusade in Birmingham, Alabama, in 1963, schoolchildren in Africa and Asia are organizing for elimination of child labor, trafficking of children, and child marriage. 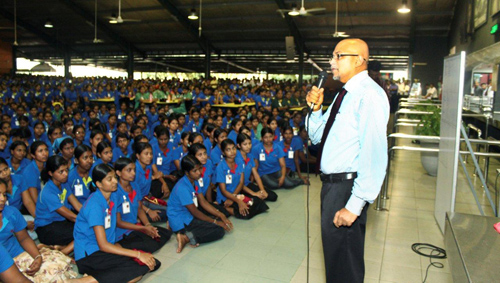 "Organizations, especially with a large female workforce, have to think holistically and proactively about attracting, engaging, developing and retaining women in the workplace, rather than offering reactive or temporary solutions." -- Dian Gomes

Linda Scott: What recommendations would you make for using technology to help women's plight? What major initiatives are currently underway?

Linda Scott: There are major programs underway, such as the distance mentoring platforms for entrepreneurs administered by the Cherie Blair Foundation for Women and the women's business registration effort conducted online by WEConnect. I would caution, however, that people in the wealthier nations make too many assumptions about the availability of technology to women in the less developed countries. In many cases, it is only elite women who have frequent access to computers or internet. Often bandwidth, even in the cities, is very limited. Mobile telephony has much greater reach, but often the signal is insufficient for more than texting and voice. And the GSMA has demonstrated that women are much less likely to have access to mobile phones than men. My guess is that the biggest effect of technology will not be business-training programs and that kind of thing, but will be the way that these devices can connect women to each other and to the wider world -- and do so in a way that those who would keep them subordinated cannot see.

Sir George Alleyne: Why are gender equality issues important in the fight against HIV/AIDS?

Sir George Alleyne: One of the issues that has concerned us in the Caribbean is the rising prevalence of HIV in girls. Many of us have considered that this is another expression of gender inequality that exists. In other words, the unequal relationships between men and women make it difficult for young girls to discuss sex in an environment like this. Sex should be a consensual activity, thus it should be possible for either partner to discuss whether or not to have sex. That is contributing to the HIV infection in young girls. It is not that young boys are unaffected but the figures in young girls are of concern to us. 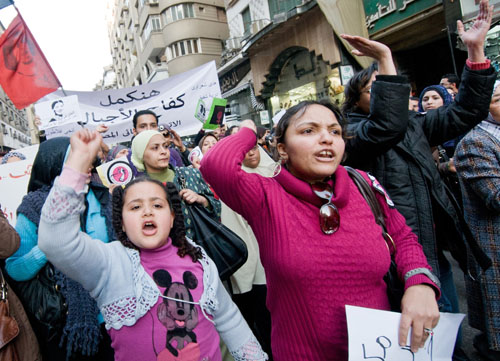 "The more governments interact with women suppliers, the better their understanding of what needs to change in the business environment to support women entrepreneurs to succeed." -- Meg Jones
(Photo courtesy of Tatiana Philiptchenko)

What effective steps have you seen to educate girls and boys on the AIDS issue?

Sir George Alleyne: There are many programs in the Caribbean. There is a Family Life education program which has been in place for several years instructing both boys and girls about their relative worth, instructing them about some of the basics in sexual practices and gender relationships. So this has been rolled out in many of the schools in the Caribbean to address the issues of HIV and gender relationships in general.

Dian Gomes: What can private firms and corporations (national and international) do to promote women's equality in the workplace and in society?

Dian Gomes: This should be both strategic and transactional, ranging from using the organization's span of influence to lobby policy changes at state or industrial sector level, to a more controllable area of the organization and associated communities.

Traditionally rooted in bigotry and patriarchy, and tolerated to varying degrees, gender inequality results in a gender gap that is a waste of female human capital in labor markets. Organizations need to identify and address passive tolerance of systems that deny women equal participation for career aspirations in the workplace, whilst understanding the cultural and social barriers which prevent their labor participation.

The critical element to be addressed remains the role of the woman in society - primarily as a care-giver, mother and home-maker and how this is balanced with her professional aspirations. MAS Holdings' pioneering MAS Women Go Beyond program is a case-study of how our organization continues to work towards empowerment in the workplace and beyond. Organizations, especially with a large female workforce, have to think holistically and proactively about attracting, engaging, developing and retaining women in the workplace, rather than offering reactive or temporary solutions.

This starts with a genuine commitment to changing the status quo and ownership from the top to support gender equality. 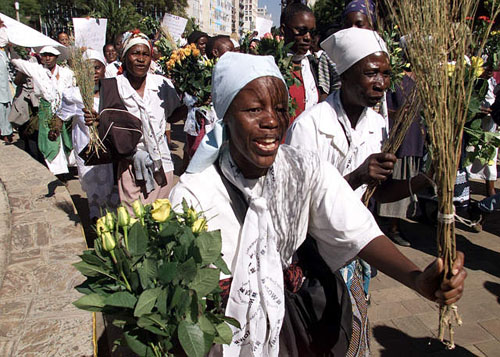 "In Zimbabwe, the Musasa Project gives psycho-social support to victims of gender-based violence including rape, while the Doors of Hope Trust is a support group consisting of and founded by women victims of rape." -- Mary King

Meg Jones: What role can international lenders and western customers of emerging nation's goods and services play in accelerating the process to end gender inequality? What examples of successful actions have you seen? What kind of coordination have you seen among governments and key lenders and customers to effect change?

Meg Jones: Trade is linked to development through the economic empowerment of women. On the one hand, women constitute the majority of the poor; on the other hand, women spend up to 90% on the family, on the health and education of children, which in turn breaks intergenerational poverty. Therefore, if we want to impact poverty, we need to increase women's earnings. International trade is a domain in which a growing number of women are succeeding. It is a viable alternative in developing and emerging economies where paid employment for women is scarce, and where many women entrepreneurs are engaged in the same sector -- where competing with each other drives down price. At the International Trade Centre (ITC), we have pioneered a collaborative model with partners like Vital Voices, WEConnect, International Women's Coffee Alliance and the United Nations Global Compact, that has helped women business owners in developing countries sell $20 million in goods and services in two years. It is the Global Platform for Action on Sourcing from Women Vendors that is a way forward in linking buyers, sellers and institutions like ITC that help build sellers' capacity to meet buyers' requirements. Increasingly, ITC is working with governments as well as corporations interested in targeting spending to source from women entrepreneurs. Governments are the largest buyers in many markets in which we work, as a UN entity. This is the exciting new frontier: the more governments interact with women suppliers, the better their understanding of what needs to change in the business environment to support women entrepreneurs to succeed. And it is the government, after all, that is responsible for policy.