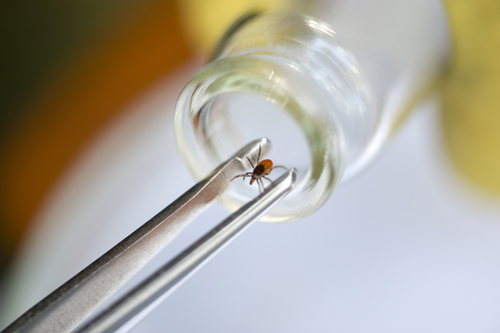 "One of the first projects should be the improvement of the test sensitivity for chronic Lyme disease patients worldwide. The European Union has spent over 1 million Euros on the development of a high-sensitive lab on a chip project which is still underway." -- Dr. Armin Schwarzbach

The CDC's new estimate this month of 300,000 cases of Lyme disease per year in the US (10 times higher than previously reported estimates) may also offer insights into the disparities surrounding reported cases versus real incidence in other countries (as discussed in my global series, Ticks). The CDC has explained that the reasons for the differences include patients who are misdiagnosed, patients who do not seek treatment and doctors who do not report cases. The dramatic increase in the number confirms that Lyme disease is a tremendous public health problem in the US and other countries, and highlights the urgent need for more education, prevention, better diagnostic tools, and better therapies.

In Part 8 of my global series, Ticks, I take a look at tick-borne diseases in Germany. I am joined today by ILADS members, Dr. Carsten Nicolaus and Dr. Armin Schwarzbach. Carsten is the Medical and Executive Director of the BCA-clinic in Augsburg, Germany and is a specialist in tick-borne diseases, in particular Lyme disease. Armin is a specialist in laboratory medicine from the Borreliose Centrum Augsburg/Infectolab. He is the International expert for the Chief Medical Officer´s Clinical Advisory Committee on Lyme Disease in Australia (CACLD), and a member of the new working group for Lyme disease of the Haut Conseil de la Santé Publique, Paris, the German Borreliosis Society and the Swiss Association for Tick-borne Diseases. 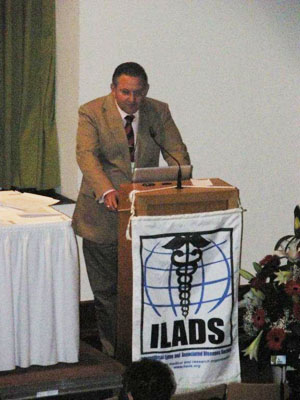 "Over 90% of the patients that we see in our clinic suffer from co-infections."
-- Dr. Carsten Nicolaus

What is the annual incidence of Lyme disease in Germany?

Armin: The "official" number from our IDSA-guides National Reference Center in Munich is 60,000 - 100,000 each year in Germany. The estimated number in Germany just for bulls-eye rashes was 753,000 in 2008. But we know that not each fresh infected patient in Germany develops a bulls-eye rash, because of several subspecies, especially B. burgdorferi garinii. Therefore, you can double the number of infections, which means 1,500,000 fresh infected Borrelia patients each year in Germany.

Carsten: In its epidemiological bulletin from the 10th April 2012, the Robert Koch Institute reported an incidence between 111 and 260 cases per 100,000 inhabitants in two population-based prospective cohort studies.

In March 2013, the following numbers were published: current knowledge suggests that after a tick bite, in 1.5% - 6% of all people affected, an infection will occur (including clinically unapparent cases), and that 0.3-1.4% will have a manifest illness. 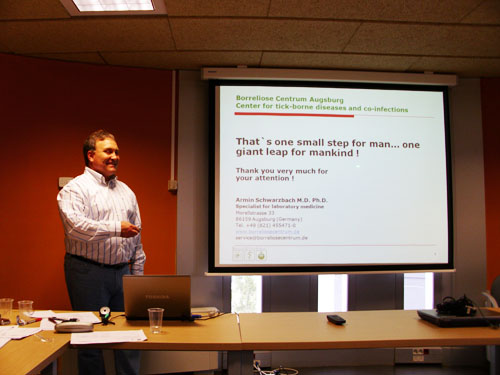 "We, as a minority of Lyme literate doctors, know by special laboratory test results that nearly all of these patients still have Borrelia activity in their blood, which improves after getting another antibiotic strategy, especially with co-infections."
-- Dr. Armin Schwarzbach

Would you comment on the annual incidence of any other tick-borne illnesses that are endemic in Germany in addition to Lyme?

Carsten: Over 90% of the patients that we see in our clinic suffer from co-infections. Very often, infections like Erlichia/Anaplasma (about 30 %), Bartonella (about 30- 40 %), Rickettsia (about 3- 4 %) can be found; Babesia also increasingly occurs as a protozoal co-infection. The main vector in Germany is the Ixodes ricinus tick. However, there are also growing numbers of local populations of Dermacentor reticularis ticks that have migrated from the Balkan region in the last years and predominantly cause Babesia infections. In addition to the co-infections that are directly transmitted by a tick bite, we observe a lot of other co-infections such as Chlamydia and Mycoplasma pneumonia, Yersinia and a variety of viral infections like EBV, Coxsackie, CMV and HSV.

In the last years, tick-borne encephalitis infections regularly occurred too - a total of about 250 cases per year.

Armin: There aren't any studies about the incidence of other tick-borne diseases from the past, and no study is planned by the German National Reference Institute for Lyme disease in Germany. Nevertheless, we know that around 6-8 % of all ticks in Germany can also be vectors for Bartonella, Ehrlichia/Anaplasma, Babesia or Rickettsia in endemic regions. We find in chronic Lyme patients with Rheumatoid Arthritis or Fibromyalgia that around 30% are co-infected with Ehrlichia/Anaplasma and some of them also with Rickettsia and Bartonella. Babesia seems to be a more endemic infection transmitted by a special kind of tick, the Dermacentor tick.

Are patients with Lyme and other tick borne infections from other parts of the world seeking treatment in Germany? How serious is the problem?

Armin: I started 12 years ago with patients from Germany, believing that it was just an endemic infection in southern parts of Germany and Austria. Nowadays, I diagnose patients with exactly the same symptoms and corresponding laboratory test results from nearly every country in the world, including Norway, Denmark, Finland, Sweden, Russia, Belgium, France, Netherlands, Italy, Spain, Portugal, Greece, Cyprus, Romania, Bulgaria, Slovenia, Hungary, England, Ireland, Scotland, and also from Australia, Singapore, Dubai, China, Southern Africa, New Zealand and others. The more you look at tick-borne diseases in the countries with ticks, the more you will find, although some of the co-infections seem to be more endemic in some countries. My impressions are that Lyme disease is epidemic and the co-infections more endemic. 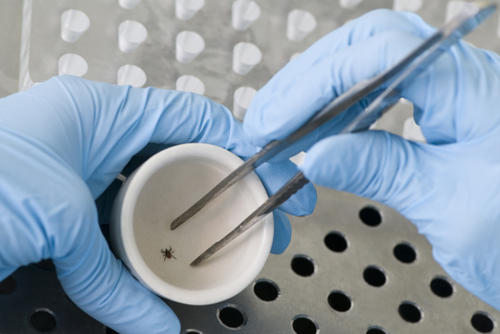 "Fortunately, the number of doctors that take Lyme disease and its co-infections seriously has increased in the last years." -- Dr. Carsten Nicolaus

Do you have a reliable test for Lyme disease in Germany? Are you aware of any in development?

Carston: Besides the classic serological tests like ELISA and Western Blot, further tests such as PCR are available. In addition to this, a lot of laboratories offer so-called cellular tests like the Lymphocyte Transformation Test (LTT) or the Elispot LTT and the CD 57 test. These methods of testing can provide better information about the chronic course of the illness and the current degree of activity of the individual infection.

A European research project is currently trying to establish a new test technology in form of a "biochip" (www.hylisens.eu). However, this technique is not yet available in the routine laboratory.

We need a more reliable test for Lyme disease and other tick borne illnesses. Should this be the global scientific priority for Lyme?

Armin: One of the first projects should be the improvement of the test sensitivity for chronic Lyme disease patients worldwide. Many doctors believe the nearly 100% ELISA sensitivity postulated by the IDSA criteria. But newer published studies show around 30-40%. So 60-70% of Lyme patients are misdiagnosed by this and not on the clinical symptoms. Because of this, the European Union has spent over 1 million Euros on the development of a high-sensitive lab on a chip project (www.hilysens.eu), which is still underway. In this project, new Borrelia antigens were cloned to improve the test sensitivity significantly. Nevertheless, it will be 3-5 years before these goals are reached. 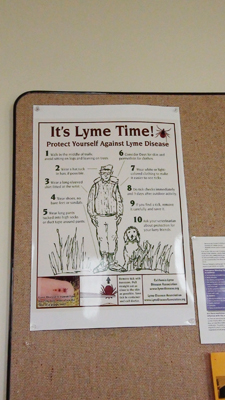 "We put a lot of emphasis on preventing tick or other insect bites by repellents, wearing the right clothing, providing information about exposure risks and about the symptoms of fresh and chronic infections. But there has to be more done worldwide."
-- Dr. Armin Schwarzbach

Do you believe doctors in Germany can adequately treat the symptoms triggered by this disease?

Armin: Yes, they can, but they don't do it because of the misdirection of the old guidelines from neurologists, dermatologists and rheumatologists. All of these "guidelines" are just recommendations based on weak evidence. The doctors don't know this and believe in the views that chronic Lyme doesn't exist. We, as a minority of Lyme literate doctors, know by special laboratory test results that nearly all of these patients still have Borrelia activity in their blood, which improves after getting another antibiotic strategy, especially with co-infections. Corresponding to this, many patients with unexplained syndromes like Rheumatoid Arthritis, Fibromyalgia, Parkinsonism, Dementia, CFS, ME, Arthritis, CTS, Autism, Multiple Sclerosis and autoimmune disorders like Hashimoto, improve clinically from long-term antibiotics. There is really no high risk in practice regarding long-term antibiotics for patients when you control the organ system and substitute the intestinal flora. The main mistake is made by not monitoring patients with fresh Lyme infections after doing short-term antibiotic therapy for 1-2 weeks. Many of them get really sick afterwards without any control after the antibiotic therapy. In Germany, we need around 3-5 years to diagnose chronic Lyme, and patients walk from specialist to specialist without seeing any infectious disease specialist for chronic Lyme. This means very high socio-economic costs for undiagnosed chronic Lyme or co-infected patients.

Carsten: The majority of German doctors treat Lyme patients based on the classic guidelines of the German Association for Neurology (Deutsche Gesellschaft fur Neurologie) or the German Association for Rheumatology (Deutsche Gesellschaft fur Rheumatologie). These guidelines are based on the IDSA guidelines. Unfortunately, a lot of patients that suffer from chronic tick-borne diseases are undertreated.

Fortunately, the number of doctors that take Lyme disease and its co-infections seriously has increased in the last years. These doctors have merged into the "Deutsche Borreliose Gesellschaft" (German Association for Lyme disease). The DBG releases its own guidelines that are essentially based on the ILADS guidelines.

Overall, it is considerably easier for German doctors to treat Lyme patients. Every doctor is independent. There is a lifelong license to practice medicine that is very difficult to withdraw. This benefits the patients' treatment.

What prevention methods are currently being used in Germany? What more do you need to do from a prevention standpoint? Is a vaccine feasible?

Armin: Vaccination would be a good thing but it will be a passive immunization and nobody knows about the needed antibody titer and boosting periods for such a project. Therefore, it will take 5-10 years to get a Lyme vaccination.

We put a lot of emphasis on preventing tick or other insect bites by repellents, wearing the right clothing, providing information about exposure risks and about the symptoms of fresh and chronic infections. But there has to be more done worldwide to provide information to the people in countries where the consciousness for the risks of a tick bite are not well known, such as Ireland. We all know that there can't be 100% prevention, whatever you do, but if you know about a summer flu as a possible sign for a fresh Lyme infection, it would help many patients and doctors.

(All Photos are courtesy of ILADS, Dr. Carsten Nicolaus and Dr. Armin Schwarzbach)