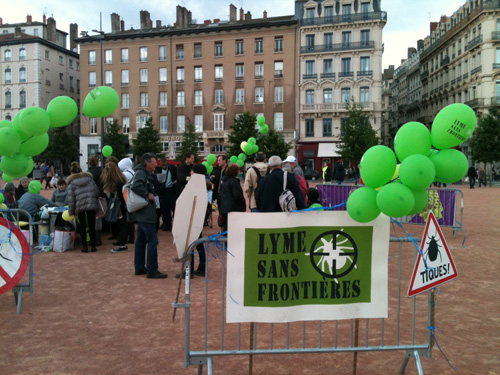 "Chronic Lyme disease is due to the persistence of Borrelia within tissues but is also probably due to other micro-organisms responsible for co-infections."
-- Dr. Christian Perronne

Lyme (Borreliosis), Anaplasmosis /Ehrlichiosis, Babesiosis, Rocky Mountain Spotted Fever, Bartonella, Tularemia, and more recently, Borrelia miyamotoi (a distant relative of Lyme Borreliosis) are recognized tick-borne infectious diseases in the United States among which the Centers for Disease Control (CDC) indicates that the number of Americans diagnosed with Lyme disease each year is around 300,000, making Lyme disease a tremendous public health problem in this country.

Additionally, as global experts in my "Ticks" series have confirmed, Lyme and other tick borne illnesses have now become a serious problem in many other countries around the world. Today in Part 9 of "Ticks", I look at the situation in France. I am joined by Dr. Christian Perronne, Chantal Perrin and Judith Albertat. Dr. Christian Perronne is Professor of Infectious and Tropical Diseases at the Faculty of Medicine Paris-Ile de France-Ouest, University of Versailles-St Quentin, France. He is chief of the Department of Medicine at the Raymond Poincaré University Hospital in Garches (Hauts-de-Seine) and is also President of the Communicable Diseases Commission at the High Council for Public Health. Chantal Perrin is the Producer of the highly anticipated new documentary on the global Lyme epidemic coming in October 2013 (co-produced by France Channel 5). Judith Albertat is President of Association Lyme Sans Frontieres.

Christian: The incidence of Lyme disease in France is officially around 9 per 100,000 inhabitants. It is higher in some regions like Alsace, near Germany. This incidence is probably highly underestimated. We have no reliable statistics about the other tick borne diseases. 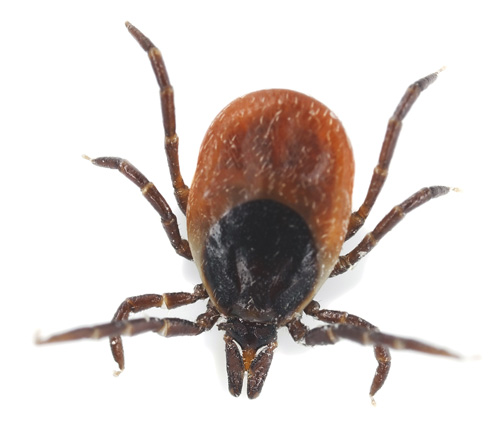 "Governments all over the world must organize multidisciplinary meetings in which scientists, physicians, biologists, vets and patients organizations talk and bring new knowledge and information for the benefit of victims." -- Judith Albertat

The CDC has recently announced that there are 300,000 new cases of Lyme disease in the US per year - 10 times higher than was previously thought. Do you believe it's time for the French authorities to initiate similar studies on Lyme incidence in France?

Judith: It is high time French authorities did real life studies. Science is not sufficient to explain and solve the mystery of Lyme disease. We need to open our minds to reality, change our behavior and accept that we were misled into error. It is time for a deep change in the way the government handles the study of Lyme disease.

Chantal: The situation in France is one of the worst. Most doctors either don't know Lyme disease or deny its existence. The authorities impose strict guidelines, copied from the IDSA guidelines. There are lawsuits against doctors or biologists who ignore guidelines in order to help patients. There is no recognition of chronic Lyme. There is no information on health professionals and no prevention at all. Even in woods and forests, which are known for infested ticks, there is no information for the public.

When I started researching Lyme disease, I was surprised to see that the word denial was often associated with Lyme. How can an illness be denied?

Please tell me what the focus has been of Lyme Sans Frontieres.

Judith: Our organization was set up in March 2012. We are fighting against Lyme denial by any legal means. This not only includes organizing demonstrations and alerting and meeting with health authorities and government ministers, but also providing help to any person concerned about Lyme disease, including hassled physicians and patients left in unbearable situations. 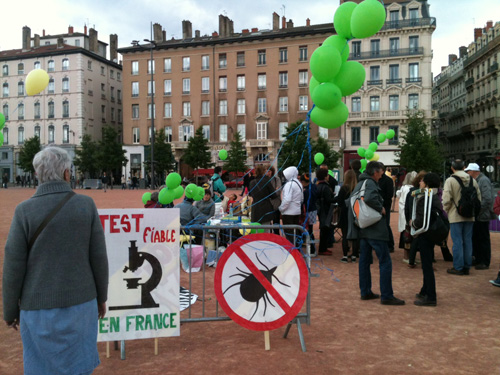 "The main point for research is the lack of funding. In most countries, research projects that do not agree with the 'official version' of Lyme disease provided by the IDSA are systematically rejected." -- Dr. Christian Perronne

Do you have a reliable test for Lyme disease in France? Are you aware of any in development? Should this be the global scientific priority for Lyme?

Christian: The tests available in France are the same as in the USA. The French National Reference Center follows the IDSA guidelines thru the European Concerted Action on Lyme Borreliosis (EUCALB). So these serologic tests are not sensitive enough to detect all the cases. I believe the development of reliable tools for the diagnosis of Lyme disease should be a global priority.

Do you believe doctors in France can adequately treat the symptoms triggered by this disease?

Christian: Doctors in France cannot adequately manage the disease since there are no reliable tests for diagnosis and follow-up. We know from scientific publications that in animals and humans, Borrelia can persist in tissues, despite several months of appropriate antibiotic treatments.

What do the good doctors do?

Chantal: They treat their patients with ILADS methods and risk penalties or more. Social security uses the guidelines although these guidelines are only recommendations and not laws. Good doctors are overloaded with work and risk their own health to face the demand.

Some patients travel to Germany or to the US to receive proper treatment. There are not many Lyme literate doctors in France and you have to be really lucky to be diagnosed properly. Last week a 9 year old kid with a giant painful erythema migrans (the most obvious symptom), fever, and a tick bite, was taken to 2 of the main hospitals in Paris, spent more than a week there in an alarming state, and was then sent back home with a sunburn diagnosis. She was sent back to hospital as she was still feeling really bad, where at long last after a few more days, she was diagnosed with Lyme disease. She was then given 5 days of antibiotics and sent back home. That is not even what the guidelines say. The guidelines recommend 3 weeks.
Most doctors here know nothing of Lyme disease, or have false information; for example they think the symptoms are pains in the joints. 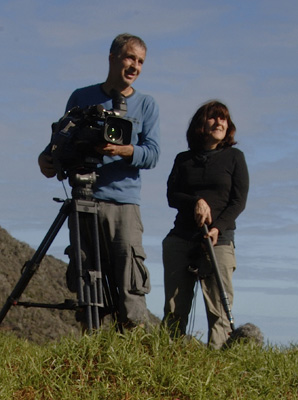 "When I started researching Lyme disease, I was surprised to see that the word denial was often associated with Lyme. How can an illness be denied?" -- Chantal Perrin

What do doctors who are not tick borne literate think these sick patients have?

Chantal: They send patients to a shrink or they give them painkillers. They have no idea what co-infections are.

Here in France you cannot get PCR testing for humans. But you can get it for your dog. Some veterinarian hospitals actually help Lyme doctors and do the PCR testing (DNA) for their human patients (not officially of course).

Christian: Chronic Lyme disease is due to the persistence of Borrelia within tissues but is also probably due to other micro-organisms responsible for co-infections. The signs and symptoms can cover the entire field of the different medical specialties. So Lyme disease is now, after syphilis, the great imitator. There are probably other factors for the development of chronic disease such as genetic, immunologic, environmental, stress, etc...

To what additional research do you believe scientists around the world must give priority in order to overcome the challenges the public faces with finding a cure for Lyme disease?

Christian: The main point for research is the lack of funding. In most countries, research projects that do not agree with the "official version" of Lyme disease provided by the IDSA are systematically rejected. Research should work on new diagnostic tools and not only on serology. Research should include co-infections. New therapeutic protocols should be designed according to the experience of many doctors in the world who cure or ameliorate the condition of many patients suffering from chronic Lyme disease. 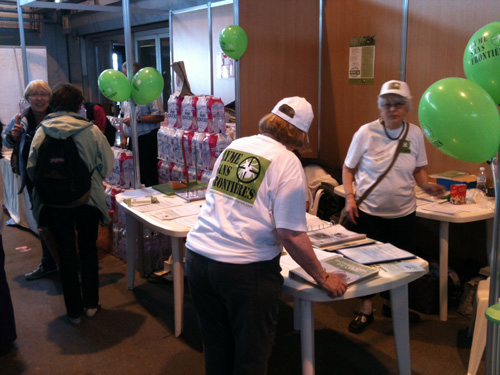 "We need to open our minds to reality, change our behavior and accept that we were misled into error. It is time for a deep change in the way the government handles the study of Lyme disease." -- Judith Albertat

How do we accelerate the research needed for tick-borne illnesses?

Judith: Governments all over the world must organize multidisciplinary meetings in which scientists, physicians, biologists, vets and patients organizations talk and bring new knowledge and information for the benefit of victims. So reality would meet with science to advance real life treatments. Accelerating research goes along with listening to and meeting with those people who have extensive knowledge of the disease but that scientists have not listened to yet.

What prevention methods are currently being used in France? What more do you need to do from a prevention standpoint? Is a vaccine feasible?

Christian: A good report on prevention was written in France by the Haut Conseil de Santé Publique (HCSP), or High Council for Public Health. It is on the Internet (written in French) but only few people know about it.

A vaccine is probably feasible, but would work on one strain only. One vaccine was marketed in the USA a few years ago but was withdrawn because it was often followed by joint pain. I think that this "side-effect" was due to the fact that most of the people vaccinated were already harboring Borrelia within their tissues, including their joints. The stimulation by the vaccine of an immune response against Borrelia probably triggered inflammation in the patients' tissues where an occult infection was present. I know that pharmaceutical companies are trying to develop new vaccines.