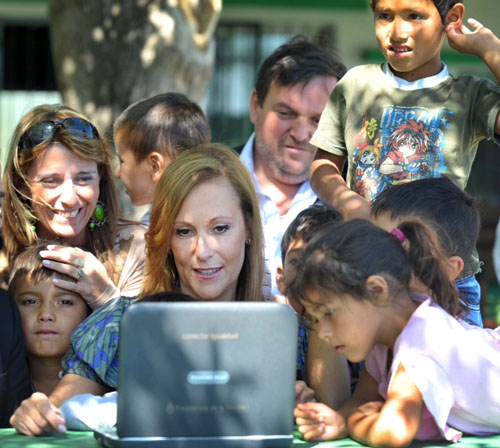 "The distribution of netbooks has at least two major aims. A social aim that is to reduce the digital divide and ensure access to technology for all young people. An educational aim that is to improve the quality of education and increase learning outcomes."
-- Silvina Gvirtz

Conectar Igualdad is a 1:1 educational program seeking to enhance Argentinian public schools through the distribution of netbooks to all students and teachers at public secondary schools, teacher training colleges and special education schools. The goal is to remove barriers to learning and bring core academic content to low-income communities. As I chatted with Dr. Silvina Gvirtz, Executive Director of the Conectar Igualdad program, while in Buenos Aires last week, I was inspired by her passion for and commitment to educational equity in a country where, according to the Social Debt Observatory from the Argentine Catholic University (UCA), an estimated 11 million people (out of a population of 40 million) live in poverty.

Silvina is a professor at the Universidad de San Martín, a visiting professor at SUNY-Albany and a researcher in the National Council for Scientific and Technical Research (CONICET) in Argentina. Between December 2011 and August 2012, she served at the Ministry of Education of Buenos Aires Province. Gvirtz is also a contributor to Helen Malone's newly released book, Leading Educational Change (Teachers College Press, September 20, 2013). We discussed some of the goals and strategies, along with her hopes for Argentinian education going forward.

"By the end of 2013, Conectar Igualdad will reach the goal of 3,650,000 netbooks. Initially, the student receives the netbook on loan. Once he/she graduates in a timely manner, the netbook is owned by the student." -- Silvina Gvirtz

Silvina, please briefly summarize the size and situation of the Conectar Igualdad project.

Since October 2010, Conectar Igualdad has distributed 3,493,289 netbooks in 8,800 public schools of Argentina. By the end of 2013, Conectar Igualdad will reach the goal of 3,650,000 netbooks. Initially, the student receives the netbook on loan. Once he/she graduates in a timely manner, the netbook is owned by the student. Netbooks today are a valid device for educational programs of this nature. Why? The educational system should ensure that every student can understand and produce complex texts: reading and understanding classical and contemporary literary works, scientific texts, numerical charts, etc.; writing essays, stories and poetry; and producing data analysis. This is part of the mission that schools must accomplish. Tablets have some limitations to achieve these objectives. Tablets may be interesting devices to promote reading comprehension, but they don't favor written production of texts with some level of complexity. It is not a coincidence that the vast majority of scientists, journalists and writers produce their texts on PC, notebooks or netbooks. The tablet does not stimulate written production. "New" is not always the synonym of better, especially in education.

The decision of adopting netbooks or tablets requires considering the context. There are educational projects involving the distribution of tablets that are very interesting. These programs, in general, are implemented in societies where there are many technological tools available for students, i.e., students have access not only to tablets but also to desk computers, netbooks or other devices. When the context indicates that the unique daily device is the one given by the State, it's more convenient to allow students to have a device that promotes writing and reading. 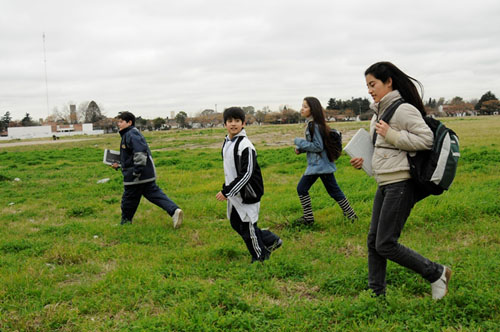 "The netbooks were designed to have various content to use in the classes, thus have a lot of free and open source educational software and multiple educational resources."
-- Silvina Gvirtz

Please briefly summarize the learning tools/content software and any add-ons that are included with each netbook.

The netbooks runs both Windows and Linux. Conectar Igualdad has developed Huayra, a free operating system based in Debian GNU Linux that runs in the netbooks that are being distributed in 2013.

The netbooks were designed to have various content to use in the classes, thus have a lot of free and open source educational software and multiple educational resources: pedagogical software to be used in Maths, Natural Sciences, Social Sciences and Literature lessons; software for videogame development and programming; multimedia, Internet and office tools; and a digital library with more than 3,000 books.

For example, you can use Avogadro for simulation of organic chemistry; Audacity, for capturing and editing audio, so students can work and experiment with their own productions; GeoGebra, a dynamic geometry simulator. A concrete example is the possibility of analyzing function parameters. For instance, the study of the concavity of a quadratic function is particularly enhanced by GeoGebra, since with a simple slider, students can appreciate the effects of changing the value of a parameter by seeing how it affects a graph of the function. With pencil and paper this is more difficult since it would require drawing different graphs, something that takes the focus away from the analysis of the function. 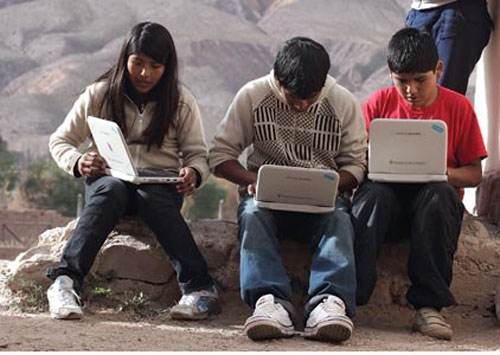 "I believe our challenge is to continue working specifically on pedagogy and the training of teachers. A second challenge we can now face in Argentina in terms of the educational system is to extend the day in all public schools." -- Silvina Gvirtz

Each netbook is given to a child, but you mentioned that it is really an education tool for the student's whole family. Can you explain this further?

The social situation of Argentine families has changed since the implementation of the Universal Child Allowance, a measure implemented in 2009 by President Cristina Fernandez de Kirchner. This benefit applies to unemployed persons or to those that work in the informal market and earn less than the minimum wage. Conectar Igualdad fits in this context of expansion of rights. Many of the students who received the netbook come from households that didn't have a computer. Conectar Igualdad was the first contact with technology for many adults and families, and the Program also provides educational content and activities for all of its members. In many cases, students are those who teach their parents and grandparents to use the netbooks. For example, in a trip to Misiones (a province in the north-east of the country), I witnessed a conversation between a mother and her daughter that received a netbook. The mother said, "Well, now you will teach me how to use the computer!" And the daughter answered, "Only if you behave yourself!" These are the family dynamics that are stimulated by Conectar Igualdad.

What are the other educational challenges you face in poorer communities? What additional support does your government provide to ensure children can now get a quality secondary school education?

In May 2003, with 52% of argentines living below the poverty line, 6% of GDP was allocated to pay interest on the debt and only half of that to education. Ten years later, after the enactment of the national law of education and the law of education funding, this government spent 6.5% of a much larger GDP last year on education. In these 10 years, teachers' salaries have increased more than six fold, new technical schools were opened and 7000 rural schools were connected to Digital Television Broadcasting. The investment in education by the State in this period is unprecedented in the last four decades, but, of course, doesn't offer magical solutions. I believe our challenge is to continue working specifically on pedagogy and the training of teachers. A second challenge we can now face in Argentina in terms of the educational system is to extend the day in all public schools.

What are the main goals of the Conectar Igualdad initiative? What are your personal hopes and dreams for this inspiring initiative?

An educational project involving the distribution of netbooks has at least two major aims. A social aim is to reduce the digital divide and ensure access to technology for all young people. An educational aim is to improve the quality of education and increase learning outcomes. My personal hope is that all students will have the same opportunities to access knowledge. Digital literacy represents to the XXI century what the literacy process was to the XIX century. My personal dream is that Conectar Igualdad contributes to achieving educational justice in Argentina. 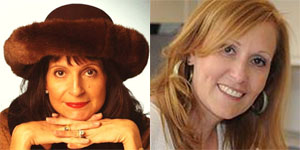 All photos are courtesy of the Conectar Igualdad program.