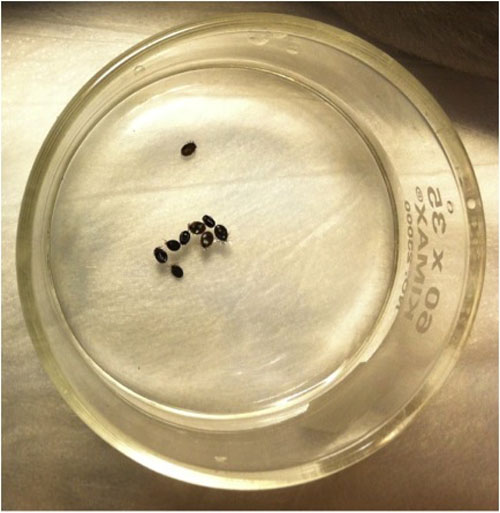 "The next step is to determine if spirochetes that persist after antibiotic treatment are infectious." -- Dr. Monica Embers

The take home for me from Katie Couric's recent report on Lyme disease is that there are still too many unanswered questions. We need more research to understand Lyme, which affects 300,000 victims each year because we don't have answers. We do know the term "chronic Lyme" is a conversation stopper in some medical circles, although most doctors seem to agree that when Lyme is caught late in patients, it can lead to their becoming persistently ill with chronic-like symptoms after antibiotic treatment. Are these symptoms due to Lyme, co-infections from the same tick bite, or something else? The evidence that there is something more complex going on seems substantial.

A team of scientists led by Dr. Monica E. Embers of the Tulane National Primate Research Center and Dr. Stephen W. Barthold, Director of the Center of Comparative Medicine at the University of California at Davis, carried out two experiments last year on rhesus macaques (monkeys) to determine whether Borrelia persists after antibiotic treatments. The studies published in PLOS ONE explored antibiotic efficacy using nonhuman primates. Rhesus macaques were infected with B. burgdorferi and a portion received aggressive antibiotic therapy 4-6 months later. The results demonstrated that B. burgdorferi can withstand antibiotic treatment, administered post-dissemination, in a primate host. I was able to speak with Monica Embers about the research and her goals moving forward.

Please briefly explain to me your Borrelia research projects.

We have several research projects, but the most well known is the one devoted to the assessment of antibiotic efficacy in Lyme disease. While we have shown that intact Borrelia spirochetes can persist following a standard duration of treatment following disseminated infection, we do not know if those spirochetes linger and cause disease or if they are eventually cleared. In addition, we do not know if those spirochetes recovered post-treatment are still infectious. We are investigating this both from the perspective of the host and from the bacteria. With regard to the host, we are in the process of inspecting tissues of infected/treated monkeys for evidence of pathology and for the presence of Borrelia spirochetes. With regard to the bacteria, we are examining how doxycycline affects the phenotype (characteristics) of the bacteria and how they may be able to tolerate the antibiotic environment when inside a host. 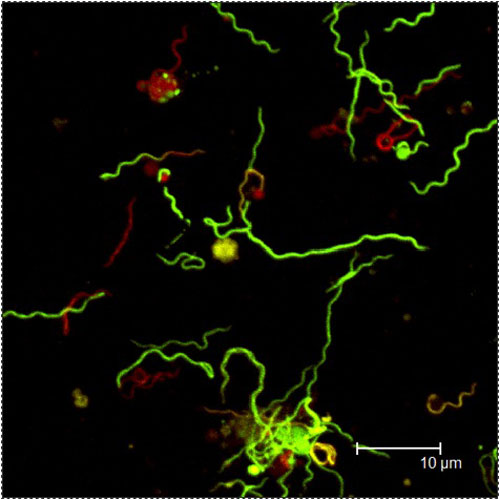 How would you describe the other research progress you have made to date?

We have performed analyses of the pharmacokinetics for doxycycline in rhesus macaques (basically, determining the blood levels over time after a specific dose) because: (1) that information was not available; and (2) to validate our persistence study. We have also repeated the study on persistence using infection by tick, but the results are not yet complete.

Has your finding of the persistence of Borrelia following antibiotic treatment been replicated by anyone? Has it been peer reviewed and published? If so - what was the critical reaction?

Prior to the publication of our work, Borrelia burgdorferi had been detected post-antibiotic treatment in mice and dogs. As for others replicating our studies, this is unlikely due to the cost of using macaques. As reported in our peer-reviewed PLOS ONE paper (http://www.plosone.org/article/info%3Adoi%2F10.1371%2Fjournal.pone.0029914), however, we performed 2 independent experiments with different strains and treatment regimens, and were able to find evidence of persistence in both. This work has been the subject of a published critique (see http://online.liebertpub.com/doi/pdf/10.1089/vbz.2012.1012) primarily for the lack of pharmacokinetic/pharmacodynamics data in the macaques. We knew this was a weakness but the information was not available (from published work) when we conducted the experiments. I had obtained the funding and begun those studies before the critique. This (http://onlinelibrary.wiley.com/doi/10.1111/jmp.12031/abstract;jsessionid=B670DDD58DC902AD3D38C256953639B0.f01t02) validated our dose of doxycycline (which was much higher than needed) in Experiment 2 of that paper. Another criticism was that we used a high dose of bacteria for the inoculum. We did this to insure that the animals became infected. What impact the initial dose has on treatment months later, I do not know, but we are now in the process of repeating the experiment using tick-mediated infection. 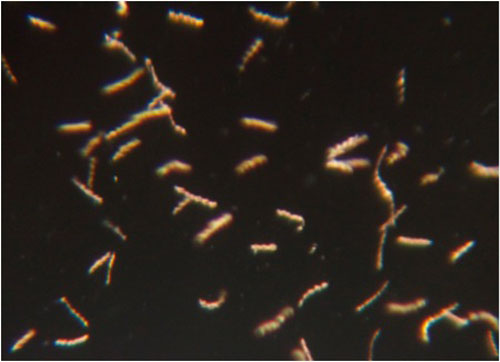 When B. burgdorferi are grown in culture, they can be seen using a darkfield microscope, where they appear opaque on a dark background.

If the Borrelia spirochetes are still infectious, what would be evident in the monkey tissues? What would you expect to see in persistent bacteria if the doxycycline had neutralized them?

One would expect to see signs of inflammation (immune cells and chemical mediators) in the affected tissues. It would strengthen the data if B. burgdorferi were actually detected in those tissues as well. There are certain immune (antibody) responses that may only be seen in a productive infection as well. Our lab is looking into this. If the persistent bacteria are non-infectious, they may be impaired in their ability to disseminate and occupy sites in the body distant from the site of inoculation. They would also not be expected to induce inflammation in distant tissues.

What diseases do you know where the persistent bacteria after antibiotic treatment do not cause illness?

There are examples such as syphilis (also a spirochete) and the pathogen that causes tuberculosis whereby the bacteria in the absence of antibiotics lives inside the host for long periods of time without causing disease. There are other examples of bacteria that persist post-antibiotics in protective niches called biofilms. In my opinion, these do not lead to controversy because they can still be detected and cultured. B. burgdorferi is not known to form biofilms inside the host, nor is it readily detected or cultured following antibiotic treatment. This makes it very difficult to understand the nature of these spirochetes that persist.

What eventually happens to the bacteria that persist in diseases (other than Lyme) where they do not cause disease?

In the case of M. tuberculosis, the bacteria can become encased in granulomas in the lung, where they live in a state of dormancy protected from the immune system of the human host. In the case of syphilis, the spirochetes enter a dormant phase, but where exactly they hide in the body? I'm not sure if it is known. 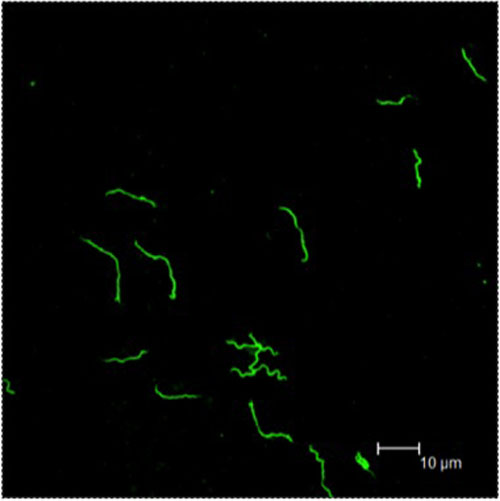 The guts of the tick are inspected for B. burgdorferi using a specific reagent that turns them fluorescent green.

Regarding B. burgdorferi and biofilms, I am aware of several pieces of research that claim that these bacteria do form biofilms and pods, where they hide from antibiotics. Are you familiar with this research?

I am aware of Eva Sapi's work. This is very interesting to consider. I chose the wording "B. burgdorferi is not known to form biofilms inside the host," because the work has been done in vitro and has not been shown in animals. This is not to say that it doesn't occur, but it just hasn't been shown to occur inside a mammal.

What are some of the research challenges that you face at present?

For any researcher, the acquisition of funding is a challenge. It is not possible to pursue all of your ideas and interests without the funds to do so. That said, I still feel fortunate to be able to do the work that I have just described. The monkey model has no guarantees, likely because it is so similar to humans. For example, some monkeys may self-cure, some may get a rash or arthritis, and each may have a different immune response to infection. Unlike mice, it is also very unlikely that the spirochetes can be cultured from tissues of an infected animal, whether it is treated or not. Some consider culture a "gold standard" for viability of the bacteria and it is simply not possible. Like humans, they are out bred and exhibit tremendous variability in disease manifestation.

If not cultures, what do you believe are the best methods for demonstrating the existence of bacteria in the blood?

Well, Borrelia is only found in the blood during early infection. If we can't culture them, then xenodiagnosis is probably the best alternative. To test if they are viable, recovered spirochetes (from ticks) would need to be injected into a naïve animal. 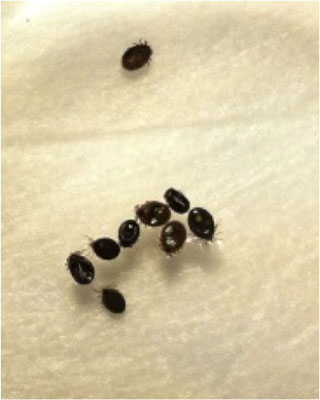 Xenodiagnostic ticks collected after feeding on an animal.

Why do you believe your research should be a priority?

There are very specific ways in which the nonhuman primate model of Lyme disease is valuable. The monkey may be considered an incidental host, like humans, whereas the mouse is a reservoir host for Borrelia in nature. This means that the spirochetes have evolved to cause little disease (with the exception of some laboratory strains) and grow readily inside mice. Mice do not get a rash or infection of the brain and their immune response to infection is not the same as the human immune response. For studying the host response to infection, an animal model closer to humans can therefore provide a significant advantage. Studying Lyme disease in humans is limited to available body fluids for analysis and the infection history may be unclear. In short, there are many variables that cannot be controlled in studying human patients. Monkeys provide a model similar to humans in which we can control variables such as infection history and monitor disease progress, to include the examination of tissues post-mortem. This model can be used to evaluate diagnostic tests, with the benefit of knowing exactly when and with what the animal was infected. It can be used to determine if true pathology persists following antibiotic treatment, and were a new vaccine made available, it would present an optimal model for testing the vaccine safety and efficacy.

What are the next steps in the Lyme research process?

As I see it, the next step is to determine if spirochetes that persist after antibiotic treatment are infectious. We already know from the mouse studies of Dr. Stephen Barthold that they are non-cultivable, but does that mean that they are "dead?" He showed that spirochetes from an antibiotic-treated mouse that were transplanted or transferred to immune-deficient mice could be detected (by their DNA) in multiple tissues, meaning that they (or at least their DNA) had disseminated. We need to find a way to test the viability of these spirochetes and establish whether or not they can cause disease. Essentially, we need to physically acquire and isolate the spirochetes from an infected/treated animal and transfer them to another animal to show that they do or do not cause disease. This is the basis of Koch's postulates. 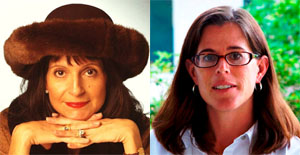 All photos are courtesy of Monica Embers.