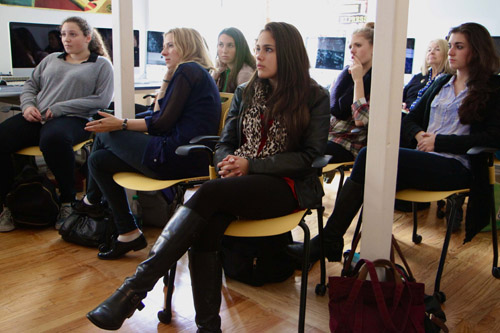 "The question is how to make your film become an essential part of new storytelling ecosystems that bring meaningful conversation, foster social engagement and define new pathways for content distribution." -- Craig Hatkoff

Perhaps the next Kathryn Bigelow is in this film class of high school seniors? And if so, how is she being prepared for the real world of 21st century filmmaking?

Of course, she may not like being referred to as "the next Bigelow." Bigelow's success is inspiring to study, but "the next innovative filmmaker" may be dreaming of forging new territory in the world of story-telling: a visionary whose art will stand out above the rest of the celluloid and contribute unique, ground-breaking work to our culture. How will she do that in the rapidly changing world of entertainment?

Craig Hatkoff, co-founder of Tribeca Film Festival and creator of the Tribeca Disruptive Innovation Awards, one of the major highlights of that annual film industry event (the founders of Kickstarter, Twitter, Wikipedia and TedX have been honorees) texts: " To stand out beyond the normal statistical probabilities, filmmakers will need to invert the box. Today's dogma will become tomorrow's broken business model. The question is how to make your film become an essential part of new storytelling ecosystems that bring meaningful conversation, foster social engagement and define new pathways for content distribution. Spend 90% of your time talking to non-incumbent players with whom you can create new content value chains."

A film teacher at the Dwight School on the upper west side of Manhattan takes seriously the mentoring of his all girl senior film class on the diverse range of career opportunities in the real biz. As an extension of his students' normal studies, Nick Lindner (who works on award-winning film and TV productions when he's outside of his classroom) invited an impressive line-up of directors, producers, cinematographers and other specialists, with accolades ranging from Emmys to a MacArthur, for a week of presentations. It was my pleasure to chat with Nick as well as with Sound Mixer and Editor Eric Diebner; Cinematographer, 5 time Emmy Award winner and Owner of Air Sea Land Productions, Anthony Lenzo; Senior Lighting Designer and 3 time Emmy Award winner Mike Grabowski; Documentary and Feature Film Producer Anna Rose Holmer; and Head of Post-Production for A24 Films, Lauren Elmer, about the rapidly changing and challenging world of moving pictures. 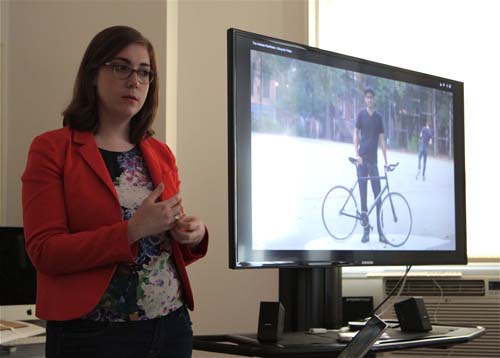 How did you all get started in TV/Film?

Eric Diebner: I got started in the film industry by interning for a production company. I earned my certification in Audio Technology at the School of Audio Engineering.

Anthony Lenzo: Right out of high school. My acting teacher's husband was a director for CBS at the time. I was introduced to the engineer of the company that provided all the video equipment for this director's project. He introduced me to the owner of the company, Eric Duke of All Mobile Video. I worked for All Mobile for approximately six years.

Mike Grabowski: I was a theater guy since high school and decided to pursue that as a career. College training happened at SUNY Purchase Entertainment Design Conservatory. I continued on that path for a bit. Technical drafting became a good bit of business for me and I happened to do it for a television design firm, The Lighting Design Group.

Anna Rose Holmer: I worked in the dark room and as a photographer's assistant during high school. I went to NYU's film program, with an early focus on cinematography.

Lauren Elmer: I studied film in college and interned for an independent film production company when I moved to New York and eventually got hired. 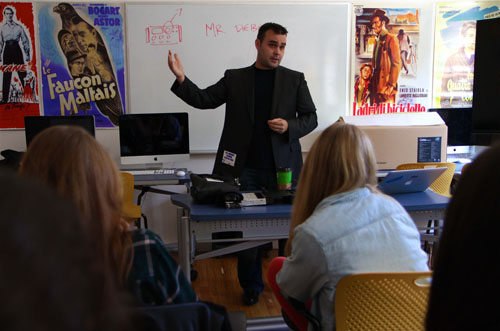 "People in this industry don't look to hire someone that edits, does lighting, manages shoots, and does sound. They are seeking the person that has mastered one talent."
-- Eric Diebner

How hard is it for filmmakers to break into the business today?

Eric Diebner: You really have to live and breathe this industry and pay your dues. For me there is nothing like it. I enjoy my job every day. Your whole life can change in an instant with a handshake with the right person.

Anthony Lenzo: If you are willing to put in a lot of hours work for relatively nothing, with very little experience (believe it or not) your chances of getting into this business can be pretty easy.

Mike Grabowski: Realize there is a ladder to climb. Never look down on so-called "lesser positions." Don't expect the path to be a straight one. Get in at the ground floor. Work as a PA. Work as a draftsperson. Work in the production offices. Work at places you never thought you might.

Lauren Elmer: Networking is key and it's important to be loyal to the relationships you start to build over time. This may not always lead to a job but they can still offer guidance along the way.

If you had one piece of advice to give to a student wanting to work in the media business today, what would it be?

Eric Diebner: Don't become a jack-of-all-trades, master of none. People in this industry don't look to hire someone that edits, does lighting, manages shoots, and does sound. They are seeking the person that has mastered one talent.

Anthony Lenzo: Understand financing and distribution of a project.

Mike Grabowski: Be aware that everyone is passionate and wants to create and make films that are going to CHANGE THE WORLD. Passion is a beautiful thing but it's easy to have it taken advantage of.

Lauren Elmer: Understand how the industry is evolving on a digital level. Not just how films are getting released but how marketing campaigns are becoming heavily dependent on social media. Trades are a great resource to stay ahead of the game as the distribution model continues to grow and change. 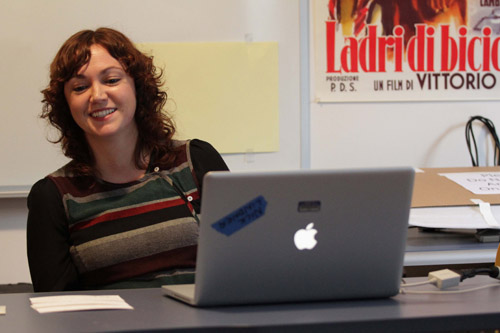 "There has certainly been a shift toward VOD. I think allowing more outlets for people to access content can only help the industry." -- Lauren Elmer

What skills do you believe a young filmmaker needs to make it in today's world?

Anthony Lenzo: Today's filmmaker needs to understand all the technical aspects. He/she should know how to operate a camera, the differences in cameras, recording sound, lighting, directing and producing. Client budgets are limited.

Michael Grabowski: Today's filmmaker has exposure to technology and other resources unlike any other time or generation. But sometimes it's important to go back to fundamentals. The visual part is first and foremost. Being able to talk composition, design, color theory, art history and have a comprehensive design vocabulary is essential.

Anna Rose Holmer: Understanding how to hone your craft into a sustainable business is the most important shift young filmmakers can make towards working as professionals. Financial literacy and business skills are required.

What skills did you learn in the real world that you did not learn in Film/TV school?

Anthony Lenzo: In today's world, a camera comes in one week and is replaced the next. A good understanding of digital acquisition and data preservation is key.

Mike Grabowski: Don't be a jerk. You may be the best at what you do or not, but you and the entire production team have to work together. It is ultimately a collaborative effort.

Anna Rose Holmer: One of the things that I love is that you continue to learn all of the time. In every job I take there is a new element to consider that I haven't encountered before. I am constantly searching for new solutions to financial, logistical, and creative problems. 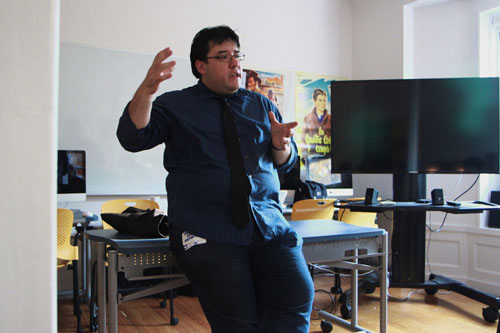 "Today's filmmaker has exposure to technology and other resources unlike any other time or generation. But sometimes it's important to go back to fundamentals. The visual part is first and foremost." -- Mike Grabowski

George Lucas and Steven Spielberg have said the film industry is heading toward a cliff. Conservative programming choices and rapidly evolving distribution schemes have set the stage for a massive upheaval. They also believe that internet-based services may become the dominant medium. What are your thoughts?

Eric Diebner: I do a lot of TV and not as much film. I have to disagree because there are so many opportunities for young people. I think the Internet is blowing up with work. It opened the doors to be creative and have different industries combine. Although the price of actual cameras has dramatically decreased, it has allowed "average" consumers the accessibility to gain experience with equipment versus only professionals having access. I have realized that there will always be a need for professionals as well as professional equipment. Even HD is wearing out, and 4K, which is double the resolution of HD, and ultra HD TV's are on their way. There is always something new that's pushing the boundaries of this industry. This challenges us to stay current and versatile.

Anthony Lenzo: With all the options for showing a project today, the industry has gotten very diluted. The cost of production and the price that people are willing to pay (when some shows are about quantity not quality) has threatened a lot of great talent. Reality TV (in my opinion) has dulled the average viewer. Most cannot even recognize poor image quality and content. The consumer went out and bought the best HDTV sets yet when they got home to watch, a lot of the broadcasters were showing cell phone videos, GoPro videos, and Skype interviews. As long as people don't notice or demand better images, the networks will keep looking for consumer provided content to feed the masses their programming.

Lauren Elmer: There has certainly been a shift toward VOD. I think allowing more outlets for people to access content can only help the industry. There are many independent films that come out of big festivals that aren't always released theatrically but are available on digital platforms like iTunes.

Nick what would you say is the most important thing you learned from teaching Film in the classroom that has helped you in the real world of film?

Nick Lindner: I appreciate the global approach to learning that the International Baccalaureate film program fosters more than anything else. It encourages me to constantly look outward beyond Hollywood at the impact of world cinema. I've been challenging myself to go beyond teaching classic global film movements such as Italian neorealism or French New Wave, and embrace topics such as South Korean distribution models, Mexican auteurs or Iranian censorship issues. This tinkering with the curriculum forces me to improve upon my own understanding of film and has allowed my approach to production practices to evolve.

For more information on the Dwight Film Program: visit www.dwight.edu 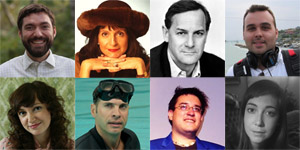