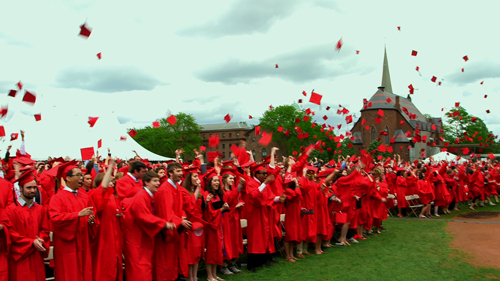 "Technology is the hope for many low-income students who cannot afford the more selective institutions. It's one answer to getting costs under control...."
-- Anthony Carnevale

What are you selling, higher education or an experience? Harvard provides a world-class education and generous financial aid, so why didn't Mark Zuckerberg and Bill Gates stick around and take advantage of it? There's nothing really free in life, but should education be the exception? What are the specific things people are learning in college and why are they valuable? If you don't go to college, what could you do instead? How did the cost of college get out of control?

These are some of the questions you'll find yourself pondering about higher education as you watch Andrew Rossi's new film, Ivory Tower, now in cinemas. OECD data shows that tuition levels in the U.S. have become a class of their own. "It seems hard to see how these costs relate in meaningful ways to the value that students obtain," comments Andreas Schleicher.

We live in the age of disruptive innovation. An age in which digital technology has the potential to bring down the cost of higher education and make it more accessible than ever before. I asked Michael Horn and Anthony Carnevale (who appears in the film) to join us in The Global Search For Education today to talk about the future of higher education. Michael Horn is the co-founder of the Clayton Christensen Institute, and executive director of its education program. Tony Carnevale is Director and Research Professor of the Georgetown University Center on Education and the Workforce. 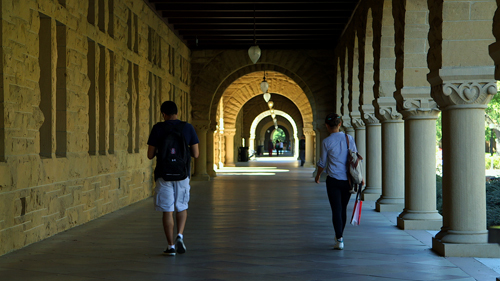 "Because American higher education is premised on limiting access and promoting selectivity -- thereby keeping a limit on the number of seats available -- there is a good chance that traditional institutions will be unable to keep up with this burgeoning demand and thereby open the door to the emergence of new institutions who can fill it." -- Michael Horn

Students from Asia and the rest of the world flock to our top American Universities. Many believe we have the best higher education system in the world and they are willing to pay for it. What does this mean for the continuing demand for places at US Colleges? What does it indicate about the strengths of these institutions?

Michael Horn: The rise of the upper-middle class in Asia has created significant demand for elite higher education. This is a good thing for many U.S. universities in the short to medium term, and is helping to sustain many. In the longer term, however, because much of traditional American higher education is premised on limiting access and promoting selectivity -- thereby keeping a limit on the number of seats available -- there is a good chance that traditional institutions will be unable to keep up with this burgeoning demand and thereby open the door to the emergence of new institutions who can fill it. We are already seeing new elite institutions like the Minerva Project, which offers a highly selective liberal arts education that is far more affordable than the traditional American higher education, pop up to meet this new demand. As more of these institutions emerge that are affordable and selective, it could commoditize the offerings at the top.

In the UK you can get a BA degree in 3 years versus 4. Is that one solution you could see working in the US as a way to cut costs?

Michael Horn: Moving to a 3-year degree as opposed to a 4-year degree certainly saves students money, although for some institutions, it would represent lost revenue. Also, although many institutions offer a 4-year program today, students often take 6 years to graduate, or many will attend for many years and never graduate. In other words, the problem is significantly more complicated. Ultimately, moving to a 3-year degree doesn't address the more fundamental business model challenges of rising costs plaguing traditional colleges and universities, which stems in part from the conflation - and subsequent administration - of what should be three separate business models represented in research, teaching, and the networking aspects of a university, as well as the subsequent arms race to move up the prestige rankings.

A development that seems more exciting is the emergence of upstart online, competency-based degrees that make time to credential, a variable, and learning, a constant. As you master material, you move on, which means that the length of the degree is in the hands of the student and the support network that the institution puts around the student. Students can complete degrees significantly faster in these programs; and the programs - by being focused on teaching and learning only - are much more affordable. The key point is that the focus is not on the length but instead on the actual learning. 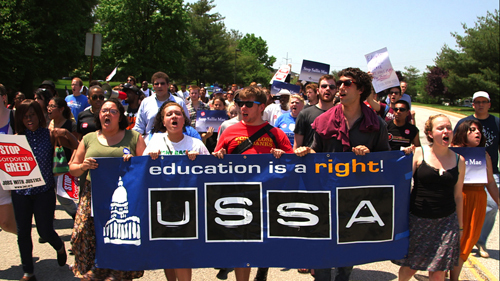 "I believe the liberal arts degree will continue to have a place and value in the world, but I think it will be able to be far more affordable so that many more people can consume a liberal arts education over the course of their lifetimes."
-- Michael Horn

China and India will ultimately create their own Ivy Leagues. What do we do well that they can use? What can they learn from our mistakes?

Michael Horn: Top American universities have been beacons of cutting-edge research; that's an engine that has produced great things for our economy and helped attract people from around the world. Although we certainly have challenges to our research model, overall, the results have been impressive. What I think China and India would do well to try and avoid is replicating our model completely. They should try to avoid conflating research and teaching under one roof where the activities don't have to be interdependent, for example, so that they don't create the cost and teaching quality issues that have resulted in the United States where research is almost always valued over good teaching.

There has been a lot of debate on the value of a liberal arts degree in a world where every industry is being disrupted by technology. Given the number of students who don't have jobs, are we at the point where we need a task force to determine how students can acquire the skills they need to succeed in a 21st century workplace?

Tony Carnevale: Ivory Tower brings to the fore the rolling tensions growing underneath the American higher education system in an even-handed way with no ideological biases to have those tensions and issues resolved. Currently there are already numerous efforts to resolve these issues and to ensure that students have the skills. The question then lies on creating information systems that ensure students have access to the data and the tools necessary to close the skill gap.

Michael Horn: We need to create many more programs that narrow the gap between students and employers. Online, competency-based programs - like Western Governors University, Southern New Hampshire's College for America, University Now's Patten University, and more - stand to help. I'm also intrigued by programs like General Assembly and Dev Bootcamp, as well as offerings from companies like LearnUp.

I believe the liberal arts degree will continue to have a place and value in the world, but I think it will be able to be far more affordable so that many more people can consume a liberal arts education over the course of their lifetimes. 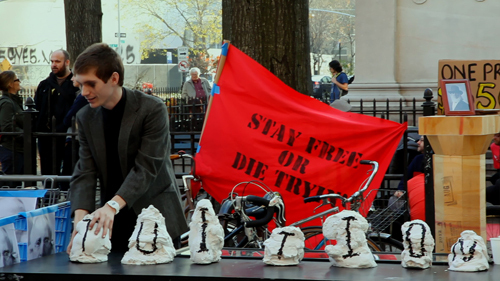 How big a role will technology play in bringing down the cost of higher education?

Tony Carnevale: Technology is the hope for many low-income students who cannot afford the more selective institutions. It's one answer to getting costs under control due to low development and distribution costs as well as much more flexible and open access. A new MOOC course for instance can be accessed by millions of students at low costs but these courses face skepticism from employers who do not see them as reliable credentials for student preparation for the labor market.

Overall, MOOCS and other similar efforts point towards the potential of technology in the form of online learning in transforming the financial landscape of the higher education sector. Clearly, there will be a mix of winners and losers on both the provider and student sides. However, getting employers to value these courses, and improving the incentives of students to enroll and complete are the first steps in potentially using these new models to lower overall costs.

Michael Horn: Technology paired with business model innovation will play a critical role in bringing down the cost of higher education. Online, competency-based programs are already showing significant promise to tackle the challenge and represent very exciting disruptive innovations focused on learning and affordability. I don't think "the solution" will be contained in just one thing either. The unbundling of the components of the degree and the ability for students to customize their education by combining different components - online courseware from a Udacity, the brick-and-mortar co-learning space of a General Assembly, the social experience of a Habitat for Humanity perhaps - represent exciting ways to bring value to students' lives in a variety of forms. We're living in an exciting time, and the opportunities to extend access to an affordable and high-quality higher education will only grow in the years ahead, even as they present challenges to existing institutions to keep up.

(All Photos are courtesy of Samuel Goldwyn Films.)