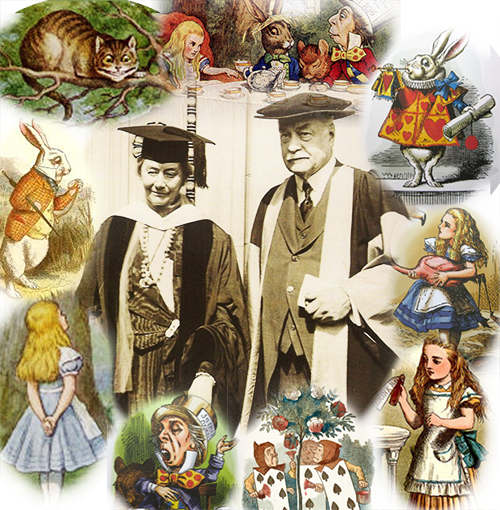 When you hear the voice of the Real Alice In Wonderland - Alice Pleasance Hargreaves - extending her thanks to President Nicholas Murray Butler of Columbia University at the spectacular centenary celebrations held in the old Columbia gymnasium on May 4, 1932, you will gasp. As for those of us who know the whole story.....well, we simply reach for our box of Kleenex.

It was the Great Depression. People in America needed hope. They had found it in Alice Pleasance Hargreaves on the centenary celebration of Lewis Carroll's birth, hosted by New York's most prominent educational institution of the day.

"Famous literary heroines do not always come up to expectations, but Mrs. Hargreaves who celebrated her eightieth birthday yesterday and made her little speech at Columbia is all that Alice's millions of devoted admirers would wish her to be. Through the years she has kept the unassuming modesty and charm that made her Alice and that now makes her a guest with whom the country is delighted..."
-- concluded the World Telegram, May 5, 1932.

Eighty-three years after this occasion, which incidentally inspired the 1985 Dennis Potter and Gavin Millar film, Dreamchild (starring Coral Browne, Ian Holm, Jane Asher), we are still nuts about Alice in Wonderland and the story behind the story; especially the little girl, Alice Pleasance Liddell, who inspired the author to write the story down for her. He eventually hand wrote and hand illustrated the story and presented it to her as an early Christmas gift on November 26, 1864. The book would change Carroll's life forever, but it might never have happened if a young girl had not inspired the previously unpublished children's book author to write one of the greatest children's books of all time. 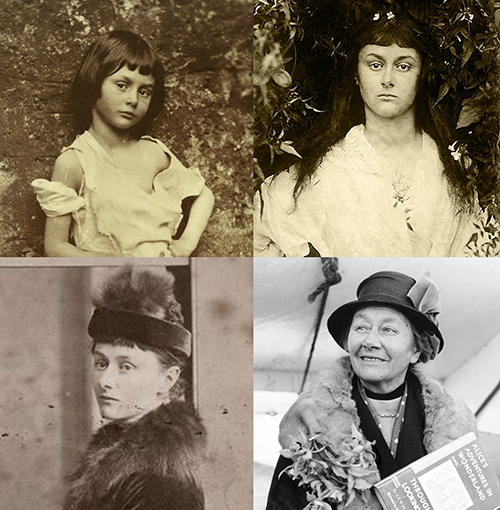 Alice Pleasance Liddell Hargreaves was the real Alice in Wonderland

Are you curious as to why certain New York museums, theaters and libraries look a little more like Wonderland recently? Firstly, it's not just New York, it's cities all over the country and all over the world. It's all about celebrating the 150th year since the book's first publication with the amazing global audience who love it!

Here's my No. 1 tip if you wish to purchase one treasure to commemorate this auspicious anniversary. Martin Gardner's book, Annotated Alice, has always occupied a special place in my heart and on my coffee table. However, the newly released Annotated Alice: 150th Anniversary Deluxe Edition (W. W. Norton & Company) has just replaced my former 2000 edition because it goes deeper from both an historical scholarship and artistic perspective into decoding the Alice books and their puzzling creator. Editor and Artistic Director Mark Burstein, President Emeritus of the Lewis Carroll Society of North America, has done a great job incorporating more of what he refers to as "myth busting" facts on Carroll's work, not to mention featuring the illustrations of 47 world renowned artists including Salvador Dali, Barry Moser and Beatrix Potter. In my opinion, this book represents the most comprehensive collection of all things Alice ever published in a single volume - a chunky little jewel that educators, students, collectors and fans everywhere will cherish!

So if you're in New York City, don't be late for the exhibit at Columbia University. If not, click here to find the closest Alice event near you.

You can view my interview at Columbia University with Alice at Columbia Curator Jennifer B. Lee and Mark Burstein, Editor and Artistic Director, The Annotated Alice: 150th Anniversary Deluxe Edition here.

(Photos montages are courtesy of G. R. Rubin and The Real Alice In Wonderland book)