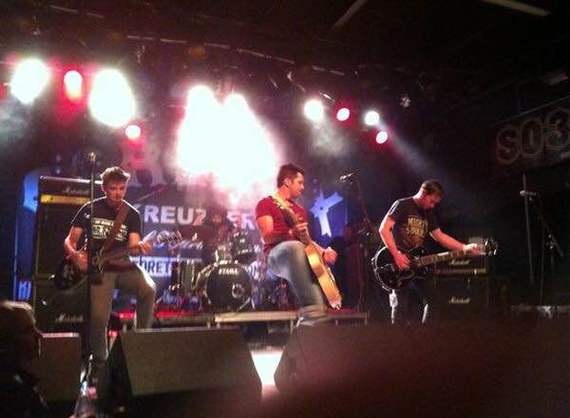 The Go Set, an Australian Irish punk rock/folk band, makes their way to the United States for their highly anticipated 2016 Tour.

The latest phenomenon, signed to ABC/Universal Records Australia, kicks off their 2016 Tour in Danbury, Connecticut at the Danbury Irish Festival.

The storied history of The Go Set is captured in the documentary film, "These are the Days", released in 2015. The film is an honest and gritty depiction of what goes on behind the scenes of a band as they write, perform and travel in pursuit of their undying dream. Led by singer, guitarist and songwriter, Justin Keenan, the film shows the constant tenacity required and consistent rejection faced by new artists. It reminds the audience of the disparity between the unglamorous life as a musician and the what they ultimately see on stage under the bright lights. They juggle adversity in their personal lives with the passion for their craft. The Go Set has embraced every step of their 17-year journey. It is an uplifting story of the universal language of music, and the positive effects it brings to people everywhere.

The Music Industry had this to say about the Gretsch Guitar-endorsed band, The Go Set's influences of traditional Celtic music and folk music, punk rock and rock and roll:

"The jig is pumped up thanks to rock solid Melbourne quintet, The Go Set." - Rolling Stone Magazine

"Trying to describe the sound of The Go Set is like trying to imagine Peter Garrett, the Pogues, and The Clash having a late night jam and a local pub with an endless supply of booze." - Blunt Magazine

"Explosive, dynamic, and engaging. There is no wonder this band is fast developing a legion of the converted. Probably one of the best live shows you will see all year." - The Drum Media

"Led by singer, guitarist and songwriter Justin Keenan, the Melbourne folk punk outfit, The Go Set has forged a reputation as one of Australia's hardest working bands over the past decade. Rolling Sound is self-produced, and it's arguably The Go Set's most accomplished album today, melding the band's Antipodean take on Pogues-esque folk-tinged punk with the more straightforward Oz rock that has permeated more recent releases." - Daniel Johnson

Having toured through most of Europe, Asia, North America, Australia, New Zealand, and Indonesia, the band has been able to meet people from all cultures. Looking back over the years of sacrifices, flat tires, back-to-back gigs, and heartaches, nothing has been more worth it than Keenan's creative journey. Keenan believes that he has formed the most incredible team of people, spanning across the entire globe, that surround him, support him, and collaborate with him. It's been a lot of fun for Keenan to gain the level of success and support that he now has, and he can't wait to see what the next years have in store for them. From shows in WWII Artillery Bunkers in Germany to huge Rock Festivals around the world, from playing on moving steam trains to playing for village children who have nothing. Keenan and The Go Set wouldn't have traded this journey for anything because of the incredible people they meet every day.