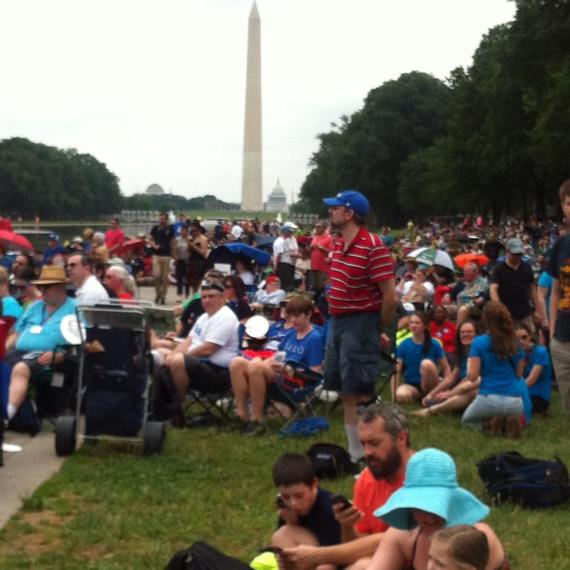 Saturday, June 4, marked the "Second Coming" of the Reason Rally. Atheists, agnostics, humanists, freethinkers, and secularists from all over the country descended on our nation's capital to rally in support of reason over faith in government.

According to the organizers, the purpose of the event was, "To show support for the secular viewpoint that reason and scientific evidence should be the basis for government decisions and to show the political clout of the secular, atheist, and nonreligious community." While the first Reason Rally back in March, 2012 boasted 30 thousand godless in the pouring rain, this second Reason Rally was only able to gather about a third of that. That isn't to say that there are less godless Americans now than there were four years ago, in fact the opposite is more likely true. Lack of believe in deities has been on the rise in America for a while now.

There are lots of factors that probably played into the lower attendance of secular Americans at the Reason Rally this time around including poor publicity, less engagement with the online atheist community, infighting within the atheist community, less atheist activist oriented speakers, and the timing. Holding the rally in the summer means that people have to compete with summer vacations, weddings, and other traditional summer events. It also means less student group involvement. Plus, the current political climate is different this time around. In 2012, there was no contentious Democratic Primary and the Religious Right had much more sway with the Republican candidate than they do with Donald Trump. The Reason Rally's Executive Director, Lyz Liddell, attributed the lower turn out to the fact that the first Reason Rally was promoted as a "Once in a Lifetime" event and so the novelty had worn off.

Despite the lower turnout, attendees I spoke with said that they really enjoyed the event and almost everyone seemed excited about the prospect of another Reason Rally. A few people told me that they hoped for more big name celebrities but also said that they wanted more speakers who are traditionally known for their atheism. People who you might say are "atheist famous."

This criticism is odd considering that this year's Reason Rally did have much of that... at least until the last minute. Actor Johnny Depp and comedian Margaret Cho cancelled their appearances. Still, Star Trek's John de Lancie was a huge draw considering the large overlap between secularists and sci-fi fans. Science superstars like Lawrence Krauss, and science educators, Bill Nye the Science Guy, Cara Santa Maria, and Yvette d'Entremont also excited the crowd. In the entertainment category, the Reason Rally featured the Amazing James Randi, Penn Jillette, SNL's Julia Sweeney, and Daily Show writer Lizz Winstead. 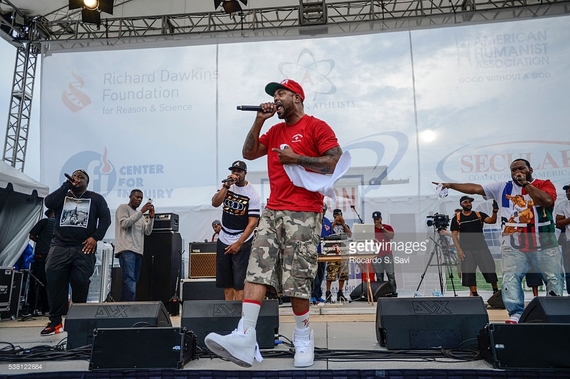 But this second Reason Rally might be remembered best for its closing act, the Wu-Tang Clan! GZA, Raekwon, Method Man, Cappadonna, Mathematics, and Killah Priest rapped about science, reason, atheism, and God.

As great as the entertainment was, the Reason Rally was political in nature and that is why it was so important to have actual elected officials speaking at the rally too. US Congressman Bobby Scott (VA-3) and US Congresswoman Tulsi Gabbard (HI-2) spoke at the rally. They were joined by Maryland State Senator Jamie Raskin who is running for US Congress (MD-8). He is favored to win the seat since winning the primary in the heavily Democratic leaning district.

At the rally, everyone I spoke with were fired up and excited. When asked, many said that they enjoyed being able to meet other atheists from around the country. Some had known each other only through online interactions while many others had met new friends. One family spoke to me about how friendly everyone was and how they met another family who surprisingly lived relatively close to them.

Another couple I met told in interesting story of how they were both Christians when they married, but have since both become atheists and openly secular. They spoke of the struggle of dealing with the loss of almost all of their church friends and the difficulty of coming out to their families.

One person I spoke with was from Mexico and didn't even know what the Reason Rally was about. When he learned that it was about atheists and secular minded Americans fighting to get religion out of politics, he was happy he wandered over, saying that he too was an atheist and that in Mexico it would be political suicide to mix church and state.

The Reason Rally wasn't without its hecklers though. There were a number of religious believers walking around promoting evangelist Ray Comfort's new deceptively titled film, "The Atheist Movie." Many of them attempted to argue with random atheists throughout the day. Another group of Christian extremists hung out at the edge of the rally yelling at atheists that, "God laughs at your calamity" and other such hateful slogans. Interestingly enough, the number of Christian hecklers were also diminished from the 2012 rally.

None of the people interviewed seemed disappointed in the rally and almost all of them had said that they would love to return for another Reason Rally. One member of the Reason Rally board didn't think there would be a future Reason Rally, citing the struggle to secure funding as the main barrier. However, Executive Director Lyz Liddell seemed optimistic saying that she is heavily documenting the planning for this Reason Rally in preparation for the next Reason Rally, which she thinks will probably be in either four or eight years. With that in mind, it is only reasonable to assume that atheists, agnostics, humanists, secularists, freethinkers, nones will gather once again in our nation's capital to advocate for church/state separation and remind politicians that the godless vote and our numbers are growing.

Video by Seth Andrew of The Thinking Atheist

You can read more from Staks Rosch on Dangerous Talk and please consider becoming a Patreon contributor.