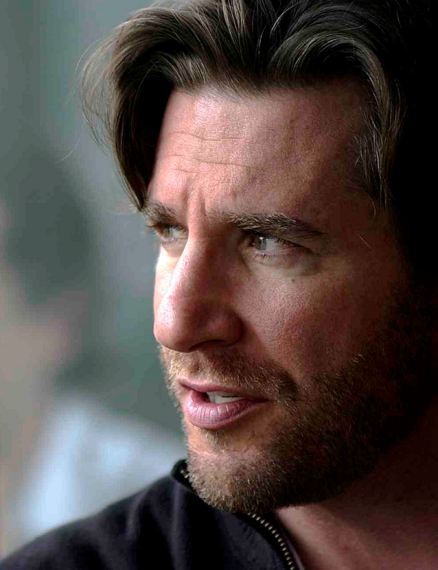 Barry Eisler, known to millions of readers for his edge-of-your-seat thriller novels, which include his bestselling John Rain and Ben Treven series, has departed from these characters in The God's Eye View, a compelling novel, introducing Evie Gallagher, an NSA analyst.

Evie discovers the existence of a covert government program given the code name, "God's Eye," and manages to connect it to the unexplained deaths of a series of journalists and whistleblowers. Before long, Evie finds herself and her young son, Dash, in the midst of something far larger and more threatening than she could ever have imagined.

Give us a brief overview of the fictional government program you've named "God's Eye."
Without giving you any spoilers, I'll simply say it's an extensive government surveillance program. It's my fictional version of some of the things actually being done today by our own government's NSA.

There are many versions of similar programs in effect, including "PRISM," "Minaret," and "Paperclip." Years ago, these and other programs were employed by the CIA and FBI to subvert and surveille the student movements of the 1960s, and to attempt to discredit and derail Martin Luther King and the civil rights movement.

These things happened; and to one extent or another, are occurring today.

Human nature doesn't change. Given the tools government had available fifty years ago, they clandestinely infiltrated segments of America...can you imagine what government is likely to do with the far more sophisticated and intrusive tools at its disposal today?

You once said, "When I wrote The God's Eye View, I imagined what wasn't being reported" and you referenced Edward Snowden. Will you elaborate on this issue?
Nobody knows the whole picture.

Former Secretary of Defense, Robert Gates, when asked how many American bases are in other countries, couldn't answer that question. When pressed further, even his staff couldn't provide an accurate number.

Similarly, how many people in America carry security clearances, whether secret or top-secret? There are only estimates of the number. The national security apparatus has become so vast that even the nominal heads can't grasp their full contours.

Even though Edward Snowden had access to a great deal of information, he didn't have access to everything. Looking at the programs he revealed to the public, I presumed there were other similar programs using advanced technology, and my imagination led me to write about a program called 'God's Eye.' By the way, since I turned in the manuscript in April, there's been a ream of evidence confirming what I dubbed 'God's Eye.' And of course, there's news about breaches, which means foreign organizations, criminals, and blackmailers can gain access to that confidential information, as well. You can name your villains--either in reality or in fiction--Russians, Chinese, Iranians, or any mafia organization.

If there's a back door to this classified information, these organizations will be there to open and exploit it.

There's a scene in The God's Eye View where a man is killed when the Internet is used to sabotage his car. Tell us about the dangers of our Internet-based society as exemplified in the novel.
The first time I thought of something like this was in 1993, when I conceived of the opening scene of what became my first novel, A Clean Kill in Tokyo, which was published as Rain Fall. My assassin protagonist, John Rain, turned off a guy's cardiac pacemaker by using a magnet and an infra-red device. The pacemaker was vulnerable to being hacked.

Since then, everything is getting connected. We talk today about interconnectivity. Your refrigerator can tell when you're out of milk. Cars are increasingly controlled by micro processers whereby the brakes, gasoline, cruise control, and indicators for the distance between your car and another vehicle, are all being built in. We even have self-parking cars. If all this can be done, it means different critical control systems can be sabotaged or altered--brakes, gas, steering, even door locks. Car systems can now be hacked and someone other than the driver can remotely take control. Tesla has just released software for self-driving cars.

Now, if you can hack a car, think about airplanes. I hope their systems are better guarded. Once everything is connected to the Internet, you can name your target: cars, airplanes, corporate infrastructure--anything.

As taken as I was by the threats addressed in The God's Eye View, I was entranced by three characters: Anders, Evie, and Manus. Tell us a bit about them.
Anders is the head of NSA and is one of the antagonists in the story. If you want to make a compelling villain, it's best to get inside that person's head and realize he or she doesn't self-identify as a villain. In our own dramas, we're all heroes. We justify what we're doing and Anders is no exception. He's doing increasingly harmful things for what he considers to be the best and most noble of reasons.

When I think of Evie, she's not quite like Anders. She's a small cog in the huge machine that is the NSA. She's not very aware of the uses to which that machine is being put, and doesn't really want to be made aware of these things. She likes her job and it's important to her. Her son is ten years old and deaf; she sends him to a great, but expensive private school; and she's a single mother who really needs her job. That helps her rationalize away any doubts she may have about the uses to which her work is being put.

It's a human situation. I'm sure there are people in agencies all around the world who have qualms about what they do, but don't want to open their eyes and see what they're actually involved in.

There's a quote I read on the Internet which went something like this: 'The reason so many of us turn our eyes away from injustice and oppression is because if we really acknowledge them, we would have to either try doing something about them, or acknowledge we're cowards.'

Neither alternative is appealing, so we chose another: we pretend the problem doesn't exist. We rationalize it away.

Let me give you an example of this. About a year ago, ISIS burned a Jordanian pilot alive while he was in a cage. They used gasoline and he died a horrible death. It was a terrible way to die. It was totally inhumane. Western condemnation was swift and severe, as it should have been.

But, we hear about U.S. drone strikes nearly every day. These drones shoot missiles called Hellfire missiles. There's a reason they're named that: they shoot warheads using a combination of chemicals capable of generating incredible heat. If you're hit directly by one, you're incinerated instantly. But if you're on the periphery--if you become collateral damage--they cause horrible burns capable of causing death or severe, lifelong disfigurement. And of course, many civilians are victims of these missiles. Our reaction is to look away and not acknowledge that we--the United States--also burn people alive. We pretend it doesn't happen.

As far as Manus is concerned, he has a terrible backstory and is filled with pathos. I think he's very relatable.

I really felt for Manus. He was my favorite character in the book.
He might very well be mine, too.

Will we ever see a return of John Rain?
Yes. I love Rain. I love inhabiting his mind and describing his perceptions, his feelings, and the events in his world. I began outlining another Rain story, but my wife and I got a new idea and started batting it around. We got so jazzed by it, we kept fleshing it out to the point where I temporarily tabled the John Rain book. When this one's done, the book after it will be a Rain book. So, with enough time, with being glued to the seat, and with enough coffee, there will be another one.

I understand Keanu Reeves will produce and star in Rain, a television series being developed by Cinemax.
That's the plan, but these things can take a long time.

What's the most important lesson you've learned about writing?
There are many, but one that comes to mind right away is to tell the story, avoiding information dumps. A writer must give information without exposition, and must trust the reader to understand it in the context of the story.

Is procrastination ever a problem?
Yes, It's a continuous struggle. I have such a good rationalization for it: I'm obsessed with political issues. There's so much good writing, commentary and discussion on the matters that interest me, and about which I'm passionate: politics, the rule of law, the media, government transparency, civil rights, and other issues.

I read and blog about them. It takes a lot of time away from what would otherwise be my day-job--writing fiction. Reading and blogging about these issues come easier to me than writing fiction, and I view them as more important than writing fiction. So, the rationalizations for procrastinating are built in. One rationalization is that the political thrillers I write are so driven by and intertwined with real world events, I tell myself I'm really doing research. (Laughter).

It is true--I could never have written The God's Eye View if I hadn't been following Glen Greenwald's reporting, and other political and newsworthy events. Actually, my reading in these areas--procrastination, if you will--has given me so many ideas for future books. It winds up refueling the furnace of my mind. I guess I could call it productive procrastination.

What do you love about the writing life?
I love the freedom of the lifestyle. On almost any given day, my schedule is my own. Being able to do what I do on my own time is hugely liberating.

More substantively, I love writing. It's great to be able to do what I love. My definition of success is finding something you love so much you would pay to do it; and if you can get someone else to pay you for it, that's success.

Congratulations on writing The God's Eye View, a suspenseful and chilling novel grounded in reality. It's a novel from an author whom The Nation called "one of the most important fiction writers in the military/covert ops/political thriller genre."