Last time, I compared the biggest celebrity-driven name trends of recent years to the naming impact of Shirley Temple in the 1930s. It was no contest. Shirley's influence absolutely dwarfed anything today's stars can muster.

Does this mean that celebrity culture had a bigger baby-name impact back in the age of the Good Ship Lollipop? Not necessarily. Shirley Temple was an extraordinary phenomenon: a child superstar. Perhaps her shining model of the All-American Girl won over an otherwise conservative naming generation. Or perhaps our own celebrity-saturated age is following a larger number of famous trendsetters, making for a greater overall Hollywood influence.

To find out, I decided to cast my net more broadly. I set Shirley aside and compared the rest of her celebrity name era to the present day.

My periods of comparison were the 21st Century (2000-2012) vs. 1930-1942, the heart of Hollywood's "Golden Age." To count as a celebrity name trend, a rising name had to be linked to a prominent person or character who was attracting a dramatically new level of attention. To capture the full impact of a new star, I looked for names that rose by the largest number of babies over a two-year period.

By that measure, the five biggest celebrity name trends of our century to date are:

And in the Golden Age? Here is a partial list of celebrity name trends from 1930-1942 that were bigger than ALL of the above:

I call it a partial list for several reasons. The first, of course, is that we left off the queen of them all, Shirley. The second is that some of the Golden-Age celebrity names had multiple two-year periods that eclipsed all of the modern stars' bests. And the final reason is that the list is limited by my 21st-century ability to spot trendmakers of the 1930s. (For instance, Rosalie was one of the hottest names of 1938. A gold star if you instantly thought, "Well of course! The Eleanor Powell/Nelson Eddy musical Rosalie was released on Christmas Eve in 1937!")

No matter how I sliced and diced the data, I found that the Golden Age of Hollywood was also a Golden Age of Hollywood-inspired baby names. Yes, the modern data may have a "long tail" of small trends that add up, but the starlets and radio-drama heroes of the '30s left a pretty long tail of their own. At some point, too, minor media influences cross the line from true celebrity names to simply "where I happened to encounter the name." 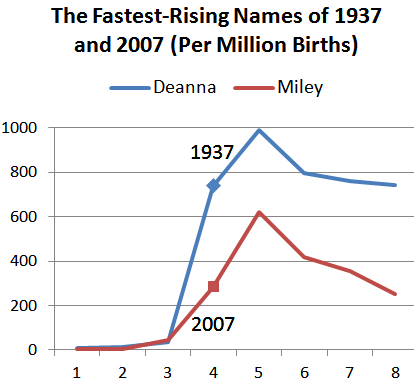 Two years after their peaks, Miley's popularity had dropped by 60%, while Deanna fell by just 25%. That kind of "soft landing" meant that far more babies ended up named after the earlier celebrities.

It's remarkable to think that a relatively traditional name era like the 1930s could actually follow celebrity names more than our own age does. Today's parents, after all, are constantly looking for fresh new names. But I suspect that very characteristic is what's holding celebrity names down today.

Unlike parents of the '30s and '40s, we're unwilling to be seen as following trends. For every mom today who chooses a name like Giselle because it's a movie princess (Enchanted), there's another who crosses the name off her list for the same reason. And unlike the thousands of parents who proudly named their kids after the likes of Shirley Temple and Douglas MacArthur, we aren't willing to name after anybody at all. The fear of conformity is more powerful than the lure of heroism, or of Hollywood dreams.